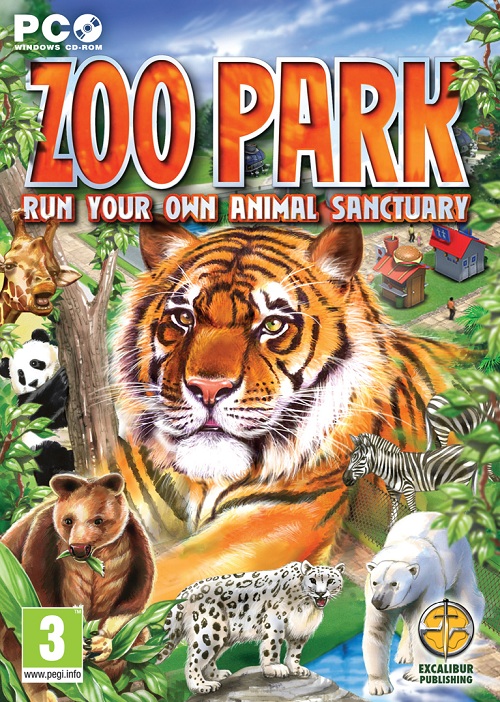 Upon first glance it is very easy to compare the humble Zoo Park: Run Your Own Animal Sanctuary from Excalibur Publishing to the likes of Zoo Tycoon or Theme Park, after all, it does look a heck of a lot like them. However unlike these games Zoo Park does not centre around you making money, but instead focuses on your ability to rehabilitate animals back into the wild in your sanctuary, whilst staying afloat by keeping your visitors happy, sounds different right?

When you venture into the world of running your own animal sanctuary you'll be treated to a brisk tutorial with good-old Uncle Joe, he'll get you up to speed with the basics, and show you the various areas to the game, it's not particularly tasking, and thankfully unlike CyberphobX's other management titles, the UI is pretty straightforward, all you need to do is remember which menu image means what, which at times can be a little perplexing. 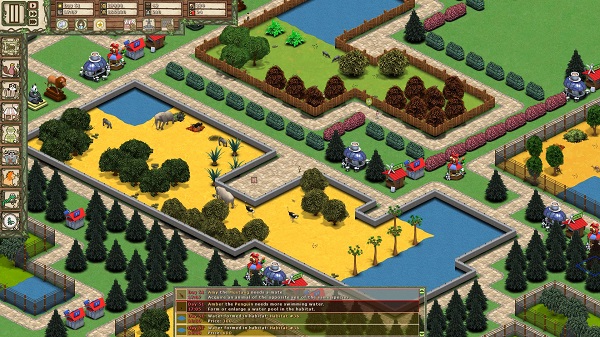 The tutorial is about as structured as the game gets; once it's out of the way you're free to take your sanctuary in whatever direction you see fit, however to keep you striving to make yours the best darn park that your visitors have ever set foot in, Uncle Joe will set you a series of challenges, that will set you targets for popularity points, a certain number of visitors, and even the animals that you research. The challenges are a nice touch to the sandbox atmosphere of the game, however the brunt of them are far more constrained than you’d want, and within a small period of time it is possible to unlock most of them which is a little disappointing considering how long you can sit reigning over your sanctuary.

In Zoo Park your animals are the real characters, forget about the customer is always right, you don’t need to give a damn about visitors after all, if they aren’t happy they can just leave, but your animals are there for life! So they’ll want to be cosy; each animal’s habitat must be built and maintained to ensure that they are comfortable, go so far as to keep them well fed and their enclosure clean and eventually they'll breed, and before you know it you’ll have lots of baby animals. Don't worry, if you do get overrun by little ones you can donate them to other sanctuaries, or simply move some of them into a new area. They won't be around forever though, each animal has its own lifespan; it can get sick and lonely, and eventually it will pass away.

Unfortunately in the real world it’s difficult for animal sanctuaries to keep in the black, so in order to keep your institute researching and caring for new animals you've got to cater to the fumbling masses of people that will visit your park, and just like the animals you'll have to keep your sanctuary pretty, keep your visitors fed and hydrated, supply gift shops and restrooms and hope that they stick around and spend as much money as possible. 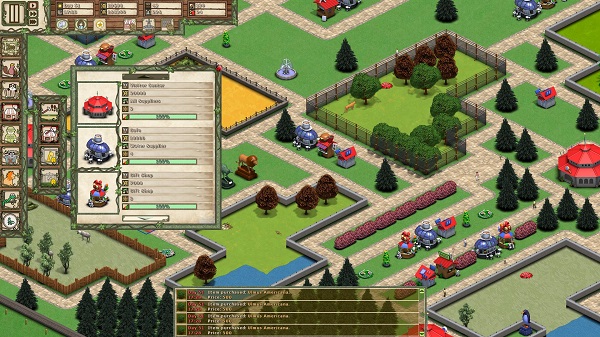 Although the currency in the game is never really referred to as money, in Zoo Park visitors bring in popularity points, these are garnered by animals that the visitors look at and the facilities that they use, this can then be used to research new animals, bring in more zoo keepers or simply maintain your current animals.

For those hoping to play the market like most good theme park games, you'll be a little disappointed with Zoo Park, as there is no way to mess with the prices of your vendors, set ticket prices, or generally interact with any buildings that don't perform research, but it's just not what the game is about.

Instead Zoo Park focuses on its animals, and boy is there a great selection! Featuring animals from Africa, America, Asia, Australia and those from cold climates you’ll be able to keep a variety of your favourite animals in your sanctuary such as elephants, penguins, bears, tigers, panthers and pandas, the diversity is spot on, and with the likes of raccoons and wolverines there is a lot of choice to keep your sanctuary going for quite some time.

However unless you're playing in sandbox mode, you can't just place any old animal in their native habitats ready to be rehabilitated, after all your sanctuary can only stretch as far as your wallet, and in order to look after every species of animal you'll have to read up on them to prove that you can adequately care for them, and rehabilitate them back to the wild via research stations. 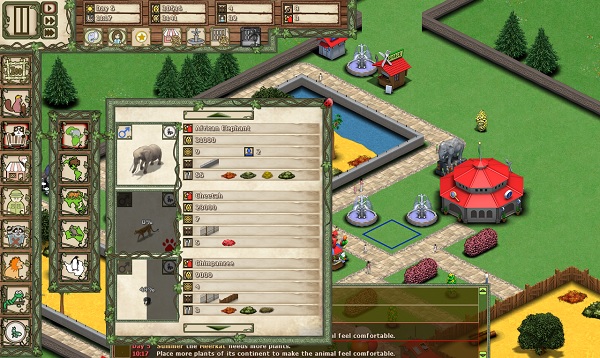 This is what is so fantastic about Zoo Park; you are never strictly limited to what you can do, whilst you will need to follow the tutorial when you begin, as soon as you're out of there you are only limited by the funds of your sanctuary, but if you prove popular with visitors you’ll have no difficulty in researching the ability to attempt to rehabilitate new animals! You’ll never need to wait to progress to a sanctuary level where you can focus on Australian animals, all you have to do is build an Australian animal research centre and research them kangaroos!

Similarly you'll not find yourself skipping from sanctuary to sanctuary as you perform your good deeds, when you play Zoo Park you begin in your Animal Sanctuary that will stick with you forever! Don’t let that hamper your dreams of expansion however, as the exterior walls of the sanctuary can be enlarged as your animal expertise grows, and we are talking massive! In a tycoon/park style game it sure makes a difference to be able to properly settle into your area with the full knowledge that you won't be whisked away just as you start getting into it! I’m looking at you Theme Hospital!

Working in the same sanctuary for eternity is bound to get dull right? Wrong! To keep you on your toes, every few days you will be tasked with an animal rescue, if you can build a habitat suitable for the distressed creature in an allotted time you can take them in with a generous donation to your sanctuary and all the relevant research required to keep the animal is yours, not only saving you time, but money also. The animal rescues are a sure-fire way to stop the game from going stale, and allows you to experiment with animals that you wouldn’t necessarily have packed your sanctuary out with! 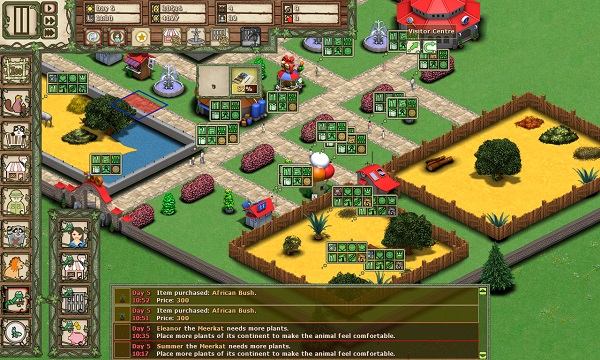 Something very interesting with Zoo Park: Run Your Own Animal Sanctuary is that despite the challenges of Uncle Joe, and the occasional Animal Rescue Task, you never really feel as though you're working towards an ultimate goal, it is difficult to distance yourself from the idea that you are playing a park tycoon game when you should be realising that with the inherent simulation aspect of running an Animal Sanctuary you aren't striving for the most money, the biggest sanctuary, or the most satisfied customers, the animals are your main priority, and the real end goal is freedom, something very different to the normal scope of gaming, which may be difficult for some to stomach.

Zoo Park: Run Your Own Animal Sanctuary is a strange breed, certain aspects cling to the strategy genre, yet the whole premise of the game makes it more of a simulation, and its disregard for making money and competing is remarkable, but this does mean that it may have some trouble appealing to the extent of modern gamers who need resolution at the end of the tunnel.

Zoo Park: Run Your Own Animal Sanctuary is available now in all good stores and online retailers for the SRP of £24.99.