Everyone alive should experience the thrill and awe of demolishing a building, now thanks to Astragon, Entwicklerteam Slaby and Excalibur Publishing everyone can in Demolition Simulator; perhaps one of the most entertaining simulators ever, and not only is it enjoyable for adults, but kids will have a great time demolishing buildings also, and with tools such as the excavator-mounted pneumatic drill, wrecking ball, blasting dynamite and clearing vehicles such as a the ever-useful digger and bulldozer, you won’t know where to start.

Demolition Simulator was developed by the same company as Digger Simulator, which is why it’s no surprise that diggers are involved so much, and in actual fact, after playing through the entirety of the game, you probably use the digger and bulldozer more than you do the demolishing vehicles.

The majority of the game consists of missions, there is also a freeplay mode where you have no restrictions such as time and percentages, however you need to have completed missions to unlock the various locations available to you, and unlike most simulators, the game comes with some handy tutorials, which although short, introduce you sharply and efficiently to the world of demolition.

For each mission you are given a time limit, for instance in the first few missions you are tasked with demolishing a church, for which you are given 1 hour 30 minutes to complete the task, although once you get the hang of the game and the controls, you’ll find you can achieve your goal in under an hour. This may seem like quite a long time, however a great feature of the game is that you can always quit missions, save and pick them up where you left off, so there is no rush to finish them all in one go, which especially helps when you are tackling particularly long ones, and balances out the slower portions of the game. 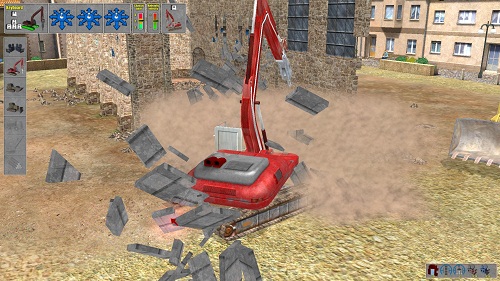 During the 12 missions the game contains you will be given numerous tasks, ranging from complete demolition, to part demolition. Part demolition requires you to use your skills so that you only demolish part of the building in question, thankfully you are given a margin of error of around 5% before you fail your mission, and a 10% margin on clearing rubble, as otherwise the game would be impossible. Complete demolition missions are exactly as they sound, and you will be required to demolish the whole of a building, and more often than not, clear away the rubble afterwards. The demolishing segment of each mission is without a doubt; extremely fun, which is why the freeplay mode is great, the wrecking ball is probably the best vehicle of the game, as, although its physics aren’t perfect —including the physics on the buildings- there is a certain exuberance that comes from whacking buildings with a large ball.

What you’re possibly wondering now is what about the dynamite? Well you’ll have to wait a few missions till you get to use it, and although the segments are relatively short, it is worth the wait. Blasting skyscrapers, cooling towers and chimneys is a great experience, and they have prolonged the enjoyment by asking you to achieve numerous goals; sometimes you will need to use dynamite economically, and occasionally blasting buildings so that they fall in certain directions, the dynamite sections are great, however as soon as you've started the blasting missions the game is soon over, and it feels as though Demolition Simulator could have contained a few more levels, this is of course where the editor comes into play. 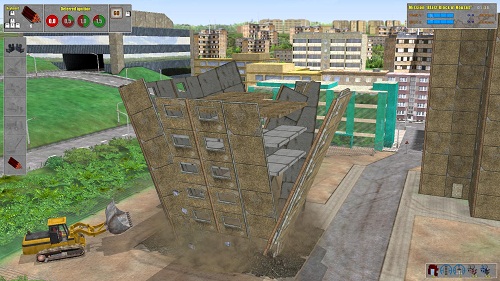 The one downside to the game is that you can only use the editor once you have finished all of the missions. In the editor there is no limit on the amount of buildings that you place, as long as they are contained within the level’s boundaries, they can be whatever size or shape you like, as long as they reach no further than 4 storeys high, and although you cannot make curved buildings, if you have a good imagination then your options are limitless. The only real shame about the editor is that you are unable to use dynamite to demolish your created levels, but if you have friends with copies of Demolition Simulator you can copy the levels you’ve made and have other people give them a play, or viceversa, you’ll find them in c:/ProgramData.

Although the physics aren’t as dynamic as they could be, Demolition Simulator is great fun, and while cleaning away the rubble can get a little tiresome at times, using the wrecking ball and dynamite more than makes up for the slow periods, the pre-made missions are quite enjoyable and challenging, and unlocking the editor is the icing on the cake, and it is definitely one of the most enjoyable simulators of the year so far.

Demolition Simulator is available May 28th on Windows for an SRP of £24.99, for more info you can check out the Excalibur Publishing website.

Just for fun we have also put together a little video showing off the gameplay, set very accordingly to the 1812 Overture, hope you enjoy. 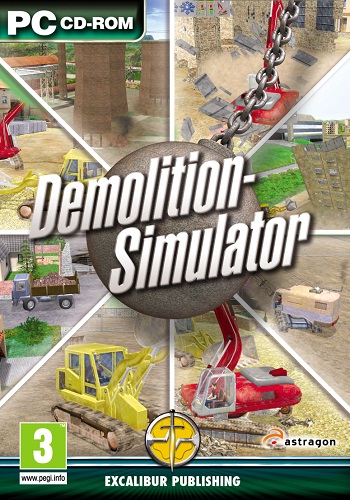 Get ready to demolish all

Run your own animal sanctuary in Zoo Park