We don’t think you’re prepared for Alien Spidy! Don't let the adorable cartoony exterior fool you, this is one evil and addictive physics based platformer from Kalypso Media and Enigma Software Productions that will have you throwing down the controller in frustration and then picking it back up again to finish the level.

Alien Spidy comes off the success and legacy of games such as Super Meat Boy, Trials and even Angry Birds; throwing together fast paced platforming action and challenging puzzles in the score driven world of ‘app’ style gaming, all to save his girlfriend who crashed her ship on planet Earth. The aim of the game is to travel from location to location; jumping, swinging and dodging obstacles in his miniature path whilst picking up score points. 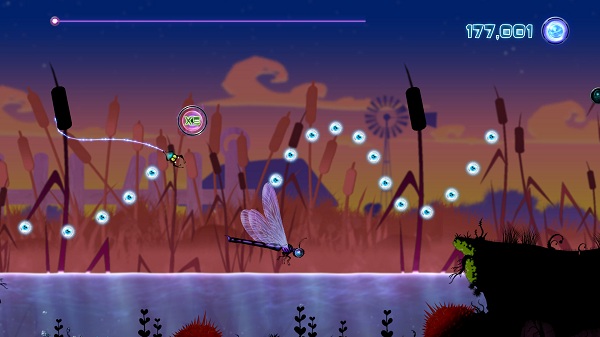 Alien Spidy’s adventures take place over three varied and unique stages; the forest, the pond and the caves that all contain distinctive powerups, enemies and supportive constructs fitting to the miniscule environments that a spider must survive against, including wasps, poisonous mushrooms, thorns and the deadliest of all his natural enemies; water!

In order to survive these harsh and hazardous environments you need to kit Spidy up with a range of indispensable powerups to further yourself in the levels, these include making precision jumps with the amazing jump; otherwise known as the double jump, enduring underwater with the bubble, skating across water with the aid of buoyancy, and even tripling your speed to fly across sections of levels with super speed to get to the oh-so-precious score. 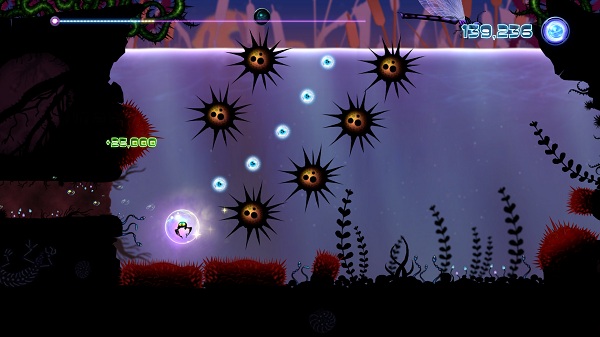 Each level is laid out with one clear path to take, it just so happens that that path is littered with the perfect amount of score organised for the best result including chained multipliers and timed bonus points! Now Alien Spidy is by no means as punishing as the great Super Meat Boy, and whilst frustration may get pretty high in the later levels, scattered about them are dozens of checkpoints allowing even the most novice of gamers to make their way through over 60 taxing levels.

It’s very difficult to not be taken in by the cute and adorable animated world in which Alien Spidy inhabits, and not only does the title character control so uniquely, he puts a good word in for spider haters out there! It just so happens that he is animated as fantastically as the charismatic ‘Splosion Man, so you really just can’t help but smile at the little guy. 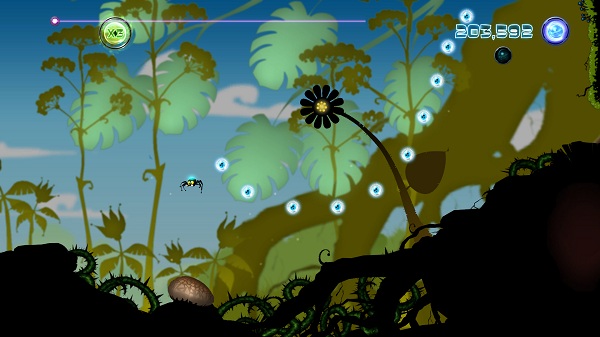 The name of the game is score, and as you traverse your way through the tough environments you are not simply advancing through the levels, but competing for the best score and the elusive 5 star rating. It’s pick up and play nature eases you into the game, and whilst extremely frustrating at times the true difficulty drops when you master Spidy’s web slinging that can prove quite tricky as you swing from tree to flower, to cave ceiling.

Alien Spidy may look like a very childish and cartoony game, but it is shaping up to be a fantastically addictive platformer, thanks to the panache of an app-style game it’s got all the look, charm and gameplay for a winning formula.

Alien Spidy is crashing down on the Xbox Live Arcade, Playstation Network and Windows PC around November.