It must be easy being an insect, in their small and innocent world there's not much that people really take notice of, perhaps that's how our intrepid protagonist the Alien Spidy crash landed on earth in the first place. Unfortunately this also means that there’s no one to help our foreign arachnid except himself, luckily as a spider he’s got his innate web slinging abilities to fall back on, otherwise he'd be destined to remain on our dangerous planet, never to save his love.

The dangers that Alien Spidy faces are not your standard enemies, and similar to the great Cool Spot your obstacles are the insects and animals that tower above your little spidery form, you'll be dodging usually harmless wasps, fish, bats and environmental hazards such as moving rocks, poisonous mushrooms and a spiders most fearsome enemy; water. 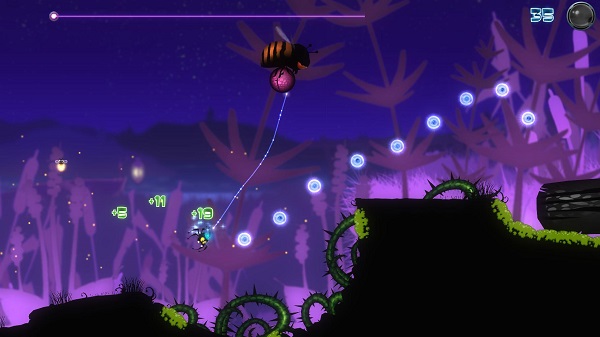 Despite being an alien spider, Alien Spidy has no super mutant powers and he doesn’t have a kryptonite, and so in order to survive in the harsh human world he’ll have to rely on a little help from a helpful array of power ups to allow him to progress on his path, these are mostly non-optional, as levels have one defined path that must be taken, and so they are necessary to actually finish a level. The catch is whether it’s an amazing jump, super speed or the all-important bubble found in the Pond, all power ups last as long as your spidy powers, and his power drains with use, so picking up a powerup requires fast reactions if you can put them to their intended use before they run out!

Alien Spidy is not for the faint of heart, if you find your patience wanes easily, this is one game that will really get your knickers in a twist, it’s not all bad though, thankfully with unlimited lives you'll never find yourself crying on a game over screen. The true challenge of the game is mastering his natural web slinging ability which is how you'll traverse each level, unfortunately it’s frustratingly difficult to grasp at first. 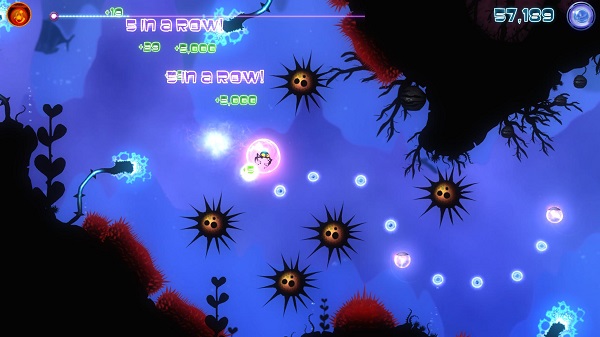 Spidy's web slinging ability is controlled entirely with the right thumb stick, with a simple flick of it you will throw a silky string of web towards any target, sounds straightforward enough, however there is no aiming reticule or assist, leaving you to pretty much fire webs blindly at your target with the hope that your hand can coordinate the right angle that your eyes see, understandably this can take a lot of getting used to, unfortunately for some this is one fast game that you don’t have the time to dally over!

In Alien Spidy your score is everything, the game works in a five star app-style system where five stars is only achieved by learning the perfect run, every level follows a strict path, and following this linearity to the tee will get you that illustrious rating, and this isn't just an optional feature for longevity; if you wish to reach the second and third stages of the game you need to get enough stars to unlock them, which is no easy feat! 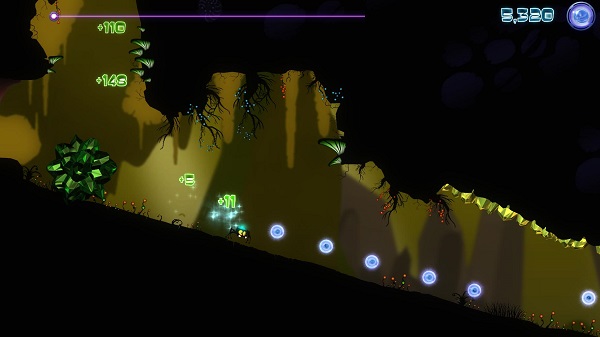 Similar to games like Super Meat Boy and Trials, Alien Spidy is uncompromisingly difficult, it’s one of the reasons that there are checkpoints liberally strewn throughout each level, however no matter how many times you fall to your grizzly death you can't help but persevere, don’t get me wrong, some will find the game offputtingly exasperating, but if you've the stomach for a challenge then you may just fall in love, because this is the best one yet since Rayman Origins.

There is a time in Alien Spidy where simple frustration is not simply yourself to blame, at times the placement of checkpoints can be in compromising locations, and after a respawn any movement will lead to your certain death. Similarly in some levels the overall flow can feel disjointed; asking you to perform slow and long arching swings, and then fast, sharp angled turns asking you to take up contrasting tactics at a moment’s notice, which at times can feel extremely unfair. 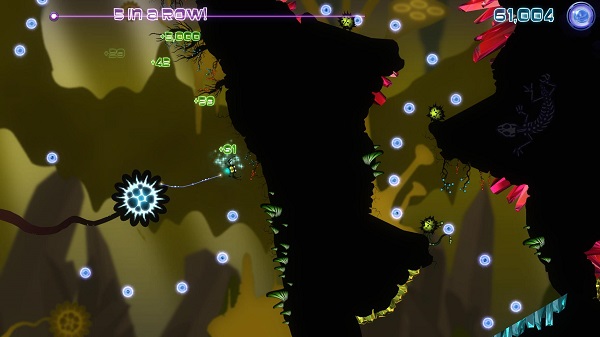 There's no denying that Alien Spidy successfully makes the pint-sized arachnid a contender for cutest character ever! If you can get used to the tricky controls, and can stomach a proper challenge, it has its flaws but Alien Spidy's journey on our planet will captivate you.

Alien Spidy is available now on the Xbox Live Arcade and Steam for the SRP of 800 Microsoft Points or £7.99, if you're looking for a true challenge and are not afraid to learn some tricky controls, well you may have found a new conquest.