From futuristic survival horror to cutesy B-movie frights Tales from Space: About a Blob is not perhaps as prolific a game as Dead Space 2 which saw a release last weekend, however this little independent title from recently formed DrinkBox Studios is not one to simply be scoffed at.

An alluring combination of LocoRoco matched with Katamari Damacy is possibly the best way to sum it up, and just like both of these games About a Blob is so mind-blowingly adorable it is contending with the great Costume Quest. The aim of the game is to consume so many objects that your blob grows in size making it possible for him to escape the terrible Earth that he and his fellow blob aliens landed on.

Our main protagonist; the blob, is an alien species that landed on the earth and was captured by an evil scientist. However in good B-movie fashion you need to escape the lab and eat up the whole world... yes the whole world. Best of all your blob is possibly the most animated blobs of all blobs in any game ever -and I'm including the slimes from Dragon Quest! From the evil little scowl he'll wear when he runs, to the innocent smirk he gives to sucking up objects, he is an extremely cute character to play as, its just a shame that he doesn't sing like the LocoRoco. 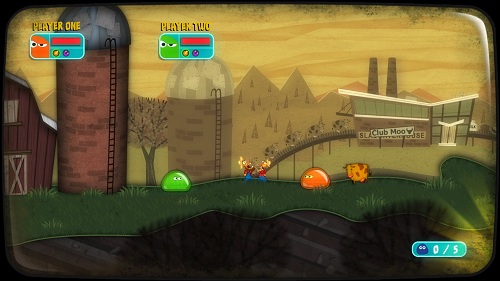 As you go from area to area your blob will become lethargic and shrink back to his original size, this extends the gameplay which would otherwise be rather short lived considering just how much your little blob can eat. Think of your blob as a Katamari; as you consume objects your blob will grow in size, and as you grow in size you will get big enough to consume bigger objects. When you pass through checkpoints you will be given a new goal size for your blob, and as you grow in size you will notice the world around you subtly shrinks in size, and then before you know it you are sucking up cows.

As well as simply consuming objects you will also have a lot of fire-power to deal with, after all the blobs are an alien race and the Earth are not very happy about their invasion, and so from the second level of the game you will need to contend with mini missiles, fire, lasers, being squished and eventually heavy duty tanks and helicopters.

However the most challenging factor of the game is usually found in the platforming sections where you will occasionally come across race-to-the-death sections that require you to be fast on the pad and quick on the uptake to figure out which of your abilities you will need to use in order to escape certain death.

There are also bosses dispersed throughout the game with general platformer-centric phases that will have you nostalgic for the days of three-hit bosses whose patterns are not too difficult to follow. 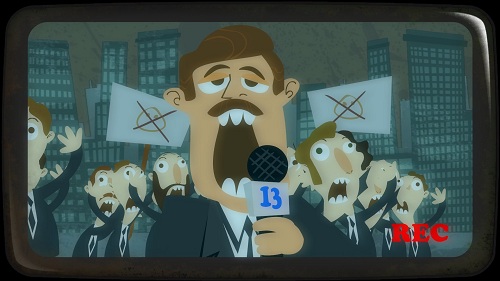 From sucking up objects and running your blob also has many other abilities, and is able to throw objects that he has eaten at enemies or switches, as well as a rush attack that allows you to pummel the ground with your blob. Throughout the course of the game you will also find yourself doing a lot of wall jumping which is essential to the game, generally the controls are pretty intuitive, and work wonderfully with your little blob.

Rather than simply blobbing around and eating things, About a Blog is very puzzle driven which is enhanced by the two abilities that you will pick up in the further stages of the game, without these features the game would be an otherwise bland title with nice graphics, however once you begin to use them, the game transforms into something completely different.

The two abilities that your blob can use are magnetics and electrics, each allows your blob to solve various puzzles and you can switch between the two with relative ease, magnetics allows you to attract and repel from magnetic objects, this gives you access to areas that would otherwise be out of reach, and keeps your blob from danger. The electric ability lets your blob store electric and discharge it at will, rather than using this as a force against your enemies this is used to solve puzzles; from removing the electricity from batteries to open doors, to charging up an electric boat so that you can proceed through a level. 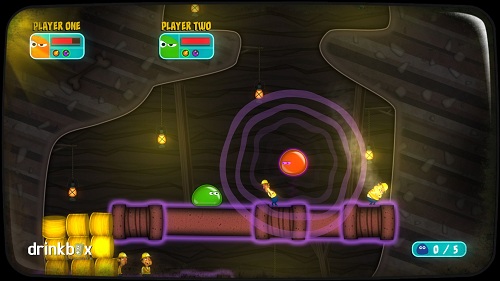 Like most puzzle games, About a Blob is all about the collectables, just like LocoRoco you will find other blob friends that you must save throughout the level with a total of 3 in every one. Alongside these there are also small purple dots of which there are hundreds of in each level, both collectables drop your time in the level which places you onto the leader boards for replay value, however some of the levels are pretty impossible for speed runs as you will find yourself getting far too annoyed at being killed by the slightest thing.

Possibly the best feature to the game is the inclusion of local co-op, however unfortunately unlike big co-op friendly games like Little Big Planet, About a Blob does not really reward you for playing with a friend; you'll not find many parts in the game that really require you to use another player which is somewhat of an oversight, thankfully the game itself is enjoyable enough to simply play with another person, and if you did have the choice, you should definitely get a friend to join you in some Earth-shattering fun.

The only downside to the game which was mentioned on several occasions is that there appears to be only a few music tracks to the whole game, and as much as I absolutely loved the 'zuu zuu' to one of the most used tracks in the game, others found it repetitive and slightly irritating, the soundtrack itself is a crazy cross between an old 60s sitcom and hammy suspense music. It's really a love/hate affair, personally I loved the music.

The game is fairly contained and consists of 4 different areas that you must traverse through as your blob. From your very escape from the lab that you are trapped in you will take your blob to the outskirts of the town, to an army base, through a power plant, farms and eventually the consumption of the Earth itself. As cutesy as the game is, looks are deceiving, the learning curve on the game is fairly steep after the first level, so don't go thinking that you are in for an easy ride with About a Blob, at times it can get just as frustrating as any other platformer.

Tales from Space: About a Blob is possibly one of the most charming and engaging platformers that I have played on the Playstation Network, and its addictive gameplay coupled with its puzzling and nerve-wracking sections makes it a fantastic purchase if you are looking for something above average on the PSN.

Tales from Space: About a Blob is available now exclusively for Playstation Plus members in North America, and will be released in Europe and North America February 9th.