Transcripted is the first game from the small French studio Alkemi Games, who set out to prove that a small team can deliver a comprehensive and enjoyable game in a small amount of time, well they did that 2 years ago on Newgrounds, now make way for the refurbishment.

If you’re unaware of a little game called Transcripted you might want to listen up; not sticking to simply one genre it is the inspired pairing of the addictive twin stick shooter and the insanely more addictive match three puzzle game, there’s pretty much nothing out there like it, and with the unique presentation, chilled out score, and challenging appeal there is no other game that deserves your money on Steam at this moment. 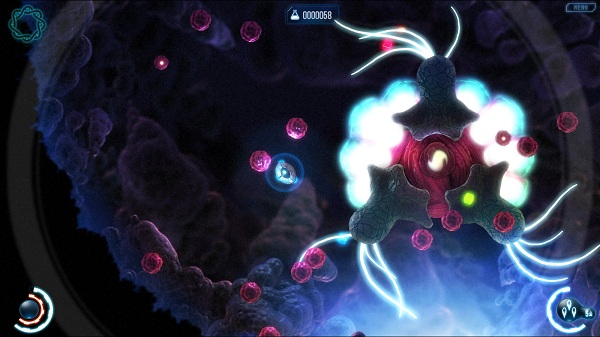 You’re too good for puzzle games right? You want a real game, all these namby pamby games should quit clogging up your Steam Store? Well you might want to just change your attitude and play some Transcripted because this game is one tough cookie! As if it isn’t enough to have to conjure the cognitive process for a constantly flowing match three puzzle game, you’ll have enemies, bullets, clouds of corrosive gas, lasers and more flying at you whilst you solve the simple task of matching three colours, doesn’t sound so simple now?

In Transcripted you control a nano probe tasked with ridding a body of a deadly and contagious xeno pathogen, but we’ll get to the story in a bit, after all you’ll want to get your head down into the nitty gritty gameplay on offer. Coursing through the level is a chain of Pseudo DNA, and to complete your samples you need to destroy as much of the unstable structure as possible by creating chains of three or more of the same colour cube, the catch is that the only way to obtain the cubes is by destroying aggressive pathogens in the area with your weapons, just don’t be surprised when they shoot back.

Now, again, this isn’t simply a shooting game, you cannot just shoot at pathogens for ten minutes and hope to complete the sample, far from it, and if you do not fully meld your ability to match and shoot, then you’ll find that levels take an ungodly amount of time to complete. However with a little research and perseverance it won’t be long before you’re literally flying through levels showing those pathogens who’s who. 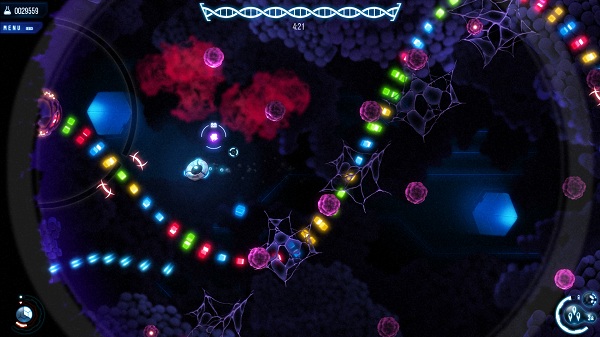 As you progress through the game you’ll be able to make use of the upgradeable qualities of the nano probe, allowing for new weapons, increased shields, faster mobility and new skills, and whilst you’ll start out as a clunky little hunk of metal, advancing through the game turns you into a delightfully fluid and perilous machine of organic death and destruction, a twin stick shooter has not been this satisfying since Geometry Wars.

Story is most often tacked onto puzzle games like Transcripted, and rightfully so, however the storyline that they have weaved across the levels is actually a rather enthralling tale that follows an academic and his professor as they sample human tissue. When a certain pathogen becomes alarming aggressive it is up to you; Adam, to use the Nano Probe to destabilise the Pseudo-DNA that the disease has created before it spreads. Amongst each level he’ll converse with computer AI Nadia which, I know we’ve all heard it before by now with such brilliant characters like EDI and Cortana, but the exposition still holds up as very entertaining.

Now there are three types of sample levels in the game spanning across the 25 that make up the story driven campaign, there are your standard ‘zuma’ levels where you must destroy the chain by matching colours and blasting anything within an inch radius of you, no game is complete without bosses, and a few are snuck into Transcripted with some clever use of the puzzle gameplay, then there are the fast paced, breakneck defensive levels where you must protect the chain of DNA and increase its stability whilst goaded by an onslaught of tough opponents. 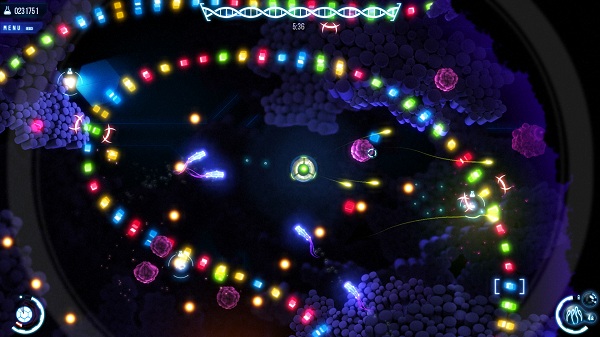 Whilst the gameplay itself doesn’t stray too far from the three level types, your surrounding evolve around you; you’ll find that the initial threat of the pathogens becomes more of an increasing hazard as they advance and react to your intrusion in a very interesting way, and so thankfully there is no point in which you feel that you are carrying out the same humdrum level after level.

By now you should already be sold on the addictive cross-genre gameplay that is not only enjoyable, but deadly challenging, however we’ve not even commented on the stunning pulsating visuals that send out a living breathing vibe from level to level, these combined with brilliant flashes of colour create a feast for the eyes, but wait, because Alkemi have completed the package with a suitably pulsing soundtrack that intensifies boss battles, and enhances the biological organic setting of the game.

Once you’re over and done with the story campaign there are higher difficulty levels to master, and a selection of challenge levels that pit you against wave upon wave of evolving enemies with a restricted selection of weapons and abilities as you compete for the best score, any excuse to play the game longer and chill out with the absolutely superb music is a must! 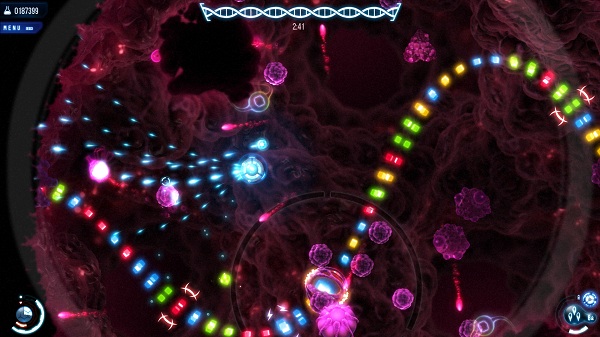 It’s not often that a game nails fluid gameplay, beautiful visuals and pulse pounding soundtrack, Transcripted stands out from the usual trend of hand-holding of the current generation and is definitely not afraid to be tough. With a storyline that took me by surprise, the only thing I could wish for is more levels to sate my thirst of the most unique and addictive shooter-cross-puzzle game ever developed.

Transcripted is available now on Steam for the low price of £7.99, if you want a puzzle game that stands out from the crowd, or a twin stick shooter that requires a bit of thought, we what are you waiting for?

Want to win a copy of Transcripted? *ENDED*

Transcripted is coming to Steam shortly 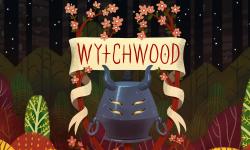