Digger Simulator 2011 is the newest simulator from the Excalibur Publishing and Astragon deal, sort of a direct sequel to Digger Simulator; 2011 improves greatly on the rather average predecessor. With a much better physics engine, more machinery to operate and greatly improved graphics the simulation title is miles above the rather sorry Digger Simulator.

It must first be said that Digger Simulator 2011 has had a physics engine made for the soil, and it is extremely impressive, your vehicles will impact the soil beneath them laying tracks in the dirt, and if you lower your dozer blade on your bulldozer you will find yourself digging deeper into the ground, and it is actually possible to dig yourself into a hole! Unfortunately alongside the impressive work that has been carried out on the soil, it is practically the only thing in the game with physics, so don’t expect to be knocking over houses and fences by mistake with your towering machines.

The controls are always a bit hit or miss with simulators; most titles usually need a lot of different key presses in order to operate the most basic of machinery, and Digger Simulator is no exception. However Astragon try and make the operation of such diggers as painless as possible, by offering you the same controls for each section of hydraulics for your vehicle; which are controlled by your usual wasd keys. They take a bit of getting used to, but the controls otherwise work quite well with controlling your diggers.

The only real problem that stems from the controls in Digger Simulator 2011 is that there is no reset button for your vehicles, which means that if you do happen to dig yourself into a rather large hole, or fall into a trench, your vehicle is stuck forever. With the new physics that have been implemented for the ground it is quite surprising that this feature is not in the game, as it is something that can happen very easily, and is usually present in simulation titles.

Another big improvement on Digger Simulator is the types of machinery present in the game; in the original the only machinery for use were the front loader, bucket wheel excavator, digger and truck. Although the bucket wheel excavator is not present in 2011 there is a host of vehicles including the usual digger with various attachments, the bulldozer, road roller, wheel loader, and even a cement mixer. With the massive range of vehicles that you will operate throughout the game it’s fantastic compared to most simulators where you will use only a couple of vehicles.

With over 30 missions to play through, Digger Simulator 2011 will definitely keep you occupied, and with the need to buy certain machinery in order to unlock some missions, you’ve got to rake up the money in order to buy vehicles like the Road Roller, and various attachments for your diggers, allowing you to demolish, dredge and excavate to your heart’s content.

However the one downside to the missions is that although there is over 30 of them, a lot of them are all very similar, so in one mission you may be digging for the foundations of the Smith’s house, and doing the same thing for the Jones', which is somewhat of a shame, but truth be told, there aren’t too many jobs that can be achieved with digging machinery.

The real shame with the missions however is that ETS have not gone that step further and Digger Simulator 2011 sticks to its roots and places its missions in a rather plain menu that can be selected. Unfortunately the career itself is not fully integrated into a world as was achieved in Demolition Company, so in Digger Simulator you aren’t running your own company per se; you are still just picking missions off of a list, and being rewarded with money rather than a rating. It just so happens that after achieving a certain amount of money, more improved machinery and missions are unlocked for you.

Alongside the missions there is also a free play option available that allows you to do whatever you wish in the 5 locations in the game, each location is specifically designed for use with particular machinery. So whether you simply want to move dirt around at the gravel pit or hone your trench digging skills in the garden division the choice is yours to pass the time.

Whilst Digger Simulator 2011 has nothing on Demolition Company in terms of innovations in the simulator genre, Digger Simulator 2011 still stands as an impressive addition to the library of simulation titles available in the UK, it still has that addictive quality that most simulators do, and if you’re a fan of soil-moving machinery you’ll love the game.

Digger Simulator 2011 is available now in all good retail stores for the SRP of £24.99. 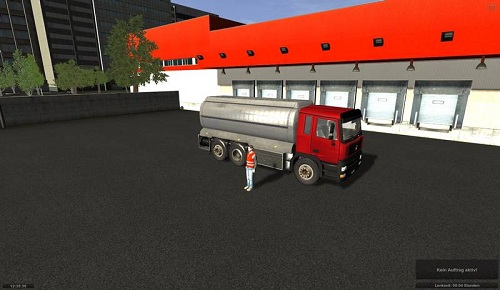 Get your hands dirty with Excalibur Publishing