There's certain films out there that really lend themselves to video game adaptation but just don't always quite reach the expectations of their followers, the Alien franchise has always been one that particularly stands out, of course it doesn't help that the series as a whole has gone from horror to action again and again, however what Alien: Isolation promises may well make it the game that actually captures the spirit of the iconic horror film, and not a guns-blazing action romp.

Isolation brings the true horror of Alien to consoles and PC, and hopes to remind us all of the unquestionable fear that the classic Xenomorph instilled in us the very first time we set eyes upon it. It also stands as a completely new entry into the universe that follows Ellen Ripley's daughter Amanda 15 years after the events of Alien as she is transferred to the space station Sevastopol in the hope to find clues on her mothers disappearance by searching for the flight recorder of the Nostromo, however an Alien has already infested the station.

At Rezzed a few months ago a small segment of the game was on show, treating us to the introduction of the Alien and the sort of atmosphere we can expect, the demo we were treated to at Gamescom was a whole other beast when we came to the realisation that the Alien we were shown at Rezzed was playing nice, on offer was one of the 'objective centric' survival missions that will be present in the game, think of them like the challenge maps of Batman Arkham Asylum, except there is no way that you'll be fighting your way out of this situation! 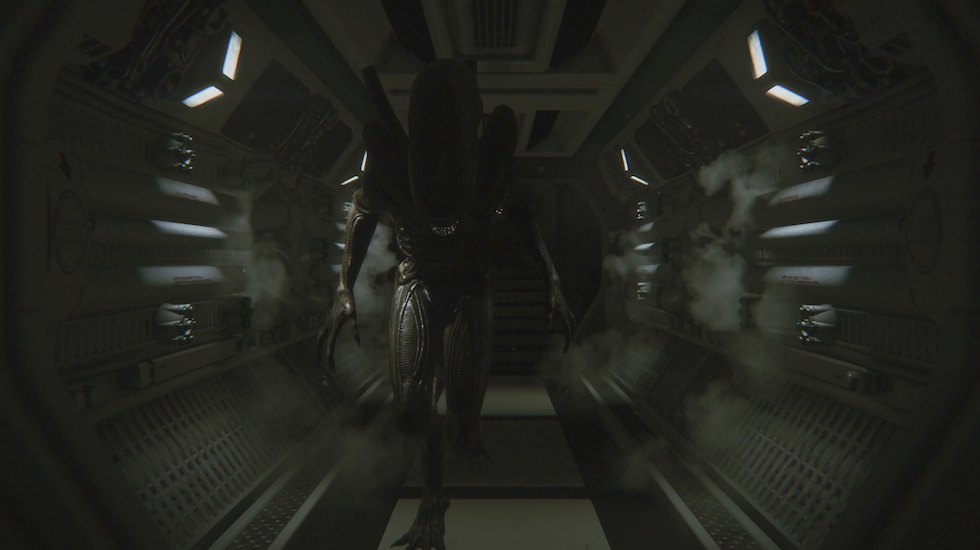 The Survival mission we played not only presents gamers with the true difficulty that some of the game will pose -especially to those that reckon they can take a Xenomorph head-on- but it also shows off some of the absolutely terrifying things that the Xenomorph can do that we had always hoped was not possible, this was due to a few more of the environmental pieces that can be used in and against Amanda's favour.

What sort of things am I talking about, well you know how the Alien would disappear in a moments notice in the film thanks to the Nostromo's ventilation system, well aboard the Sevastapol you're just as vulnerable, as you skulk around the eerily quiet corridors bringing up your motion tracker at the slight change of pitch of its iconic sound, don't be surprised if your sinister friend drops off of the radar all of a sudden, leaving you to shriek in fear at the most insignificant of sounds as you inch your way closer to the nearest locker, safe in the knowledge that you'll have somewhere to hide if he happens to drop right in front of you! If he does, you need hope he's facing the other way, I was this lucky on one occasion.

It's not all bad though as we also got to hold onto the safety blanket of the flamethrower, which I actually refused to take around on the basis that it was 'cheating', this ideology got turned around on its head after multiple attempts at reaching my objective when death could have been avoided if I had said flamethrower on me. Now, don't go misunderstanding exactly what power the flamethrower holds, this is not a free ticket to unleash a fiery death upon your alien nemesis! Think of it as more of a distraction technique, Xenomorphs are the cavemen of the alien world, and fire is somewhat of an undiscovered tool, so if you give him a quick blast with one he'll run off with his tail between his legs, giving you the chance to run and hide in a locker for the next five minutes as you compose yourself.

The crafting system was also available for a tinker, unfortunately I was far too involved in managing to complete the challenge that these completely passed me by, because surprisingly enough, the simple task of getting from one door to another door, turning on a generator and escaping is not quite the simple hassle free errand it sounds when a Xenomorph is thrown into the mix. Which is actually one of the points I very much enjoyed from the demo on show; it wasn't easy to complete, and there is nothing more satisfying than a challenge!

With only two demos to base my judgement on I can definitely say that I and many of the other Gamercast crew are excited for Alien: Isolation, although I do have my worries in regards to the longevity of the game, only on the basis that there are not many horror games that manage to properly envelope the player into an atmosphere where fear and dread never pitter away, for now I can only hope that Alien: Isolation will reach that goal.

Alien: Isolation is scheduled for a release October 7th on Windows PC, Xbox One, PlayStation 4, Xbox 360 and PlayStation 3.

Be one of the first to play Alien: Isolation at EGX Rezzed!

Alien: Isolation set to bring the series back to its true, terrifying form!