If you looked up the phrase addictive fun in the dictionary you should probably find PopCap Games’ massive library of games! Catering to the more casual market PopCap know their genre and they know their audience, so it’s no surprise that they released Zuma’s Revenge last year, sequel to the multi-million unit selling Zuma.

For those of your locked away in a cupboard for the past 3 years, Zuma’s Revenge plays like everyone's favourite match-three game Bejeweled but with a twist! Rather than throwing balls from the sky, or messing around with them on a grid, the object in Zuma is as a little frog, to spit balls at other balls in a string to match three. Oh, but there’s a catch; the balls are moving, and if you can’t get them to stop, or halt their movement enough then they’ll end up eaten by the Aztec skull at the end of their path. 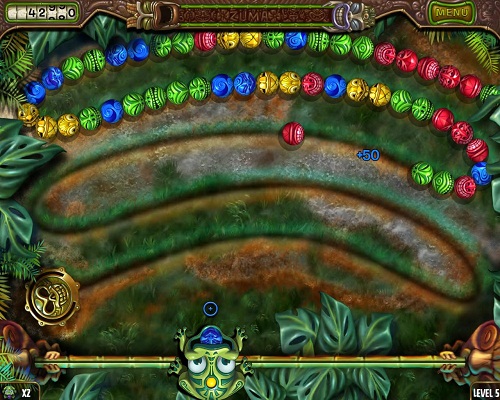 If you have never played Zuma before it will take a little getting used-to, however once you are a few levels in you will find yourself hooked! The game is all about chain reactions, getting your timing right, and using the full extent of the power-ups at your disposal. The player must reach the state of “Zuma” by which time balls will stop being added, and the player must remove all of them from the level in order to progress.

Zuma’s Revenge does not change the formula of Zuma very much, the core of the game is still there, which is no surprise as it shifted 17 million copies, alternatively PopCap have added to the engaging gameplay by the way of three new powerups, that were missing from the original so much you'll wonder why they weren't present in the original. Best of all of the three powerups is the Lightning Bolt that allows you to remove every ball of the colour you choose from the level which works really well at producing chains and getting rid of the balls that may be hindering your progression. Another powerup is the Tri-Shot which fires three cannon balls in a spread across the balls which works extremely effective at clearing a path, and then there is the Laser that allows you to remove four balls from the level which again works well at producing chains or activating other powerups that are essential to your survival. 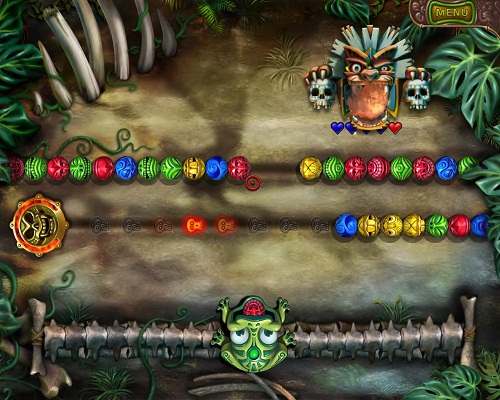 There is also the inclusion of boss battles in the game, working in a rather clever style like Space Invaders you are required to shoot at the boss on a rail however the boss is protected by strings of balls, which you’ll have to destroy in order to get their health meter down, as you progress through the island each boss battle escalates getting more and more tactical in terms of the way that you must defeat them, which was very nice to see in such a simple game.

With 60 stages in the adventure mode alone, Zuma’s Revenge will have you hooked for hours, especially when you get up to the high 40’s where the game begins to get really challenging with an additional 6th colour ball introduced. Then of course there are 60 stages in Heroic Frog mode, 60 Challenges and 10 extremely difficult Iron Frog levels, if you think you are hardcore, I’m sorry to announce that you’ve met your match! Complete the Iron Frog gauntlet and you can fully pronounce yourself a proper gamer! 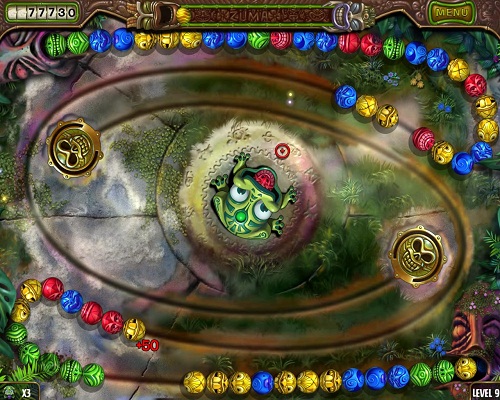 As always PopCap just go to show that they are the King of casual gaming, and every title that they release is simple, unadulterated fun, although it may not be at absolutely huge as Bejeweled in terms of audience reach, the Zuma franchise is one that is wholly addictive and approachable as a game, if you've never encountered one of PopCap's games before and are looking for something with a bit of a challenge check out Zuma's Revenge! You won't be sorry! Just don't go complaining to me about how challenging the game is!