We love our WiiWare titles at Gamercast, so we were ecstatic to hear that the hit WiiWare title in Japan is gracing our stores in Europe, this Friday, the 9th April. 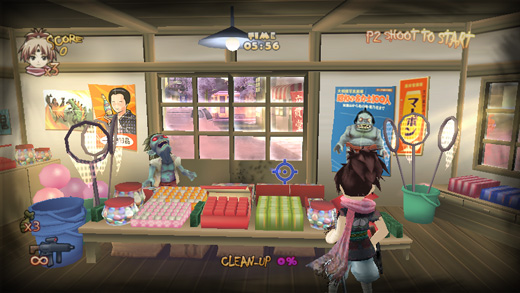 Akaoni Studio’s Zombie Panic in Wonderland is a frantic third-person-shooter, where you must take control of one of seven playable characters including the likes of Snow White, Momotaro and Dorothy, and must slay hordes of zombies, practically destroying everything in sight so that you can uncover the mystery behind the walls of the northern city. Akaoni have manga-ised all of your classic fairytale characters, and put them into very sharp distinctive looking environments, and after all, who doesn’t like going on a zombie rampage? Zombie Panic in Wonderland is available the 9th April 2010 on the Wii Shopping Channel for 1000 points. Check out some of the gameplay in the official trailer here.