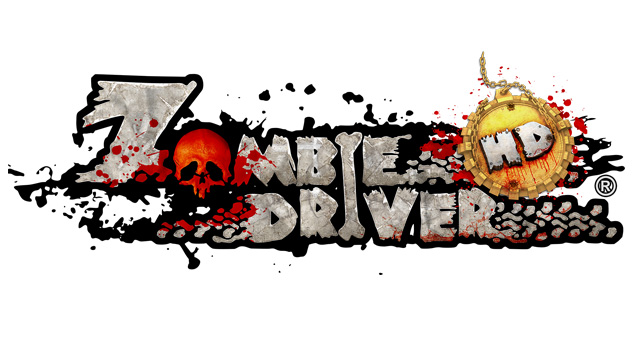 With Halloween rolling away, you get used to the zombification of games, with everything from Train Simulator 2012, to Red Dead Redemption taking advantage of the allure of the undead crowd it's a wonder why some titles do not join in on the fun aesthetic change, like the original GTA… well in fact you don't even need for that to occur, because a little game called Zombie Driver released back in 2009 did just that, and the developers at Exor Studios have made it available to Xbox 360 owners!

If you're unaware Zombie Driver is a vehicular combat game where you must mow down as many zombies as possible to satisfy missions and objectives in a top down environment as an innocent taxi driver that is truly in the wrong place, at the wrong time. As you progress through the apocalypse-ridden town you'll unlock numerous cars that you can kit out with a range of single use guns dotted around the vast city. It's a fast paced, fun and interesting take on what feels like Carmageddon meets GTA, and if you don't own it already then you may have never have taken advantage of the bliss that is a Steam sale! 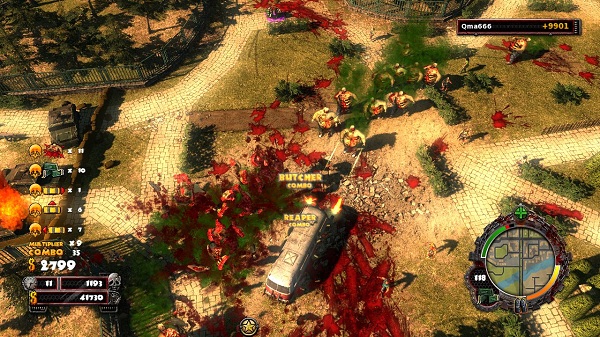 Now Exor have not simply ported the brutal zombie-massacring fun of Zombie Driver to the console, and whilst the game is billed as a HD remake, it is so much more than that, and to remove themselves from the recent trend of the HD remake, it should really be called Zombie Driver 2.0: Now with more Zombies!

If you played the original release of the game then you may remember it taking part across 17 different missions, that ranged from rescuing survivors, culling zombie numbers and the like, Exor have practically doubled the length of the game with 31 missions that add new elements such as massive bosses, new cargo orientated objectives, and bashing in zombie lairs to attempt to keep the threat at bay, whilst the story has not been changed greatly, the game has definitely been padded out, the question is if you will find the missions a little too repetitive?

Whilst the added content in the new missions aren't repetition of the same objectives in the original, the new missions only have a handful of objectives that have been interspersed between the original missions, hands down, those designed for the new vehicles are fantastic, and the new humongous bosses are a real challenge, but you can only take out so many zombie lairs before you get a little tired of it all. 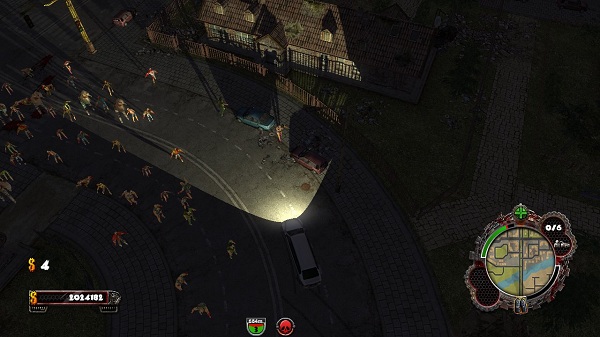 Zombie lairs aside, undoubtedly the best addition to Zombie Driver HD is the new vehicles that bring the total roster up to 13, introducing some beastly machines such as the Bulldozer, Army Truck, Fire Truck and the long awaited Tank! Each machine is catered for with its own missions, and just like a good old kill frenzy, there really is nothing quite like rolling through a town in a Tank. It's just a shame that the newly added trucks are limited to their individual campaign missions, so you won’t catch yourself sporting a tank in Slaughter mode, or driving a tank through town on a suicidal run of every mission.

Not only is the game bigger, Exor Studios have listened to a lot of the feedback regarding the original release and improved it greatly, best of all is the new mini map, which improves upon one of our gripes with the original where you would get stuck in a dead end too easily thanks to a single arrow that would indicate your closest objective. Not only does the new mini map work wonders, but nitrous is now rechargeable which is an absolute god send, and firmly settles it as a strong tactical element perfectly suited for the tightest of spots.

Alongside the story mode, Zombie Driver comes with two other modes; Slaughter and Blood Race, unfortunately these have not been physically changed for the HD re-release, however they have had online leader boards added to the fray! So if you think you are the fastest little car in the West, get ready to be put in your place by some guy that you've never met, the leader boards are also fantastic for Slaughter Mode where you can compete against your friends for the best score eliminating wave upon wave of zombies. 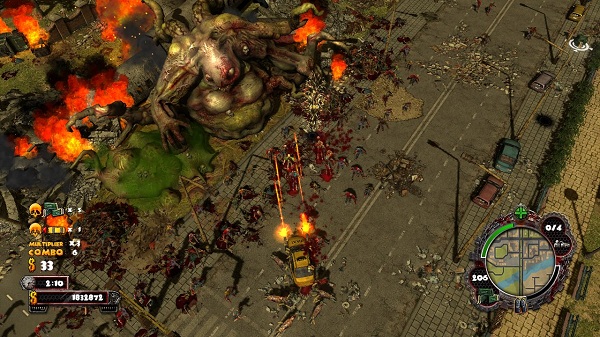 The Blood Race Single Event and Tournament mode are pretty fun and contain three different modes; Race, Endurance and Eliminator, whilst these are only available in singleplayer against AI opponents, they are great for the competitive streak that runs in gamers, there's nothing better than shooting out first place with a cleverly timed rail-gun, and the Endurance mode just separates the men from the boys as you race against the clock with dynamite strapped to your vehicle.

Now the Xbox Live version does suffer somewhat of being a re-release of a PC game, there are a few issues with the user interface which is far too small to be played on a home console. Exor also appear to have missed a trick with a lack of competitive multiplayer, leaving you to wonder exactly why you cannot have fun in a Blood Race with your mates, that said, the leaderboard system was a component that the original was sorely missing, and they do make the secondary game modes far more fun. It's not all bad though, on top of the original PC release, the HD refit looks absolutely fabulous thanks to the overhauled graphics and new weather and lighting systems that make driving at night a truly fearful experience! 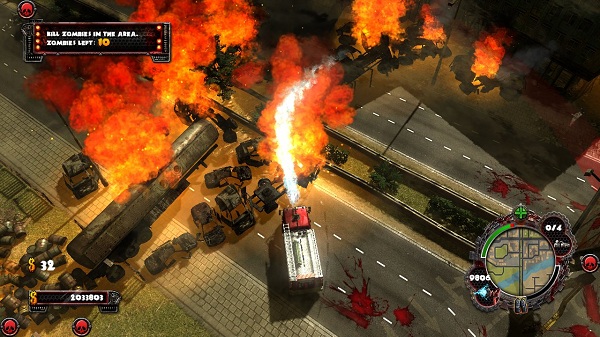 Zombie Driver HD is a HD remake that Exor Studios should be proud of, not only does it improve on an almost flawless game, it brings the frantic zombie fight to home consoles, whilst some of the missions can get a little repetitive at times, all is forgiven as soon as the tank drives in!

Zombie Driver HD is available now on PC and Xbox Live Arcade for the SRP of £6.99 and 800 Microsoft Points respectively, if you've never owned the game now's the time to splash out, and if you did own its previous incarnation it topples the usual 'HD remake'!