We cringed when Yakuza Of The End was announced, and didn’t actually properly announce it on Gamercast because we knew that it would be years til it’s release in the West. Well that time has finally come around, and The End is nigh, except this time it’s all about Dead Souls in the Japanese Underworld.

Sega have announced that Yakuza: Dead Souls will be coming to Playstation 3, featuring the entire storyline; after the debacle of Yakuza 3’s release, and will even get all the downloadable content and a brand new mini-game; Pachislot!

“We know how much people love Yakuza in the West and with Dead Souls being the latest and greatest in the franchise, it is only right we bring it to them closer to the Japanese release than ever,” said Gary Knight, Senior Vice President of Marketing at SEGA.

The red light district of Tokyo is under attack from hoardes of zombies; not too different from those encountered in Left 4 Dead, however one problem that Francis, Bill, Zoey and Louis didn’t have is that you’ve also got to worry about the treacherous Japanese Underworld too! 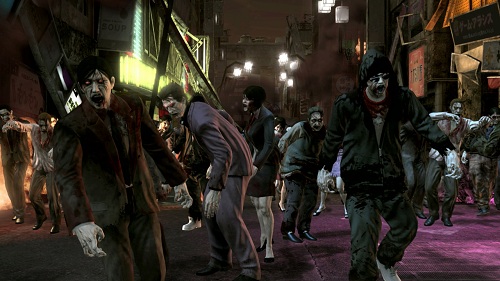 Dead Souls allows you to play through the eyes of four of the most infamous characters of the series, and for the first time in the Yakuza franchise, it features gunplay with pistols to machine guns, and even rocket launchers. They haven’t butchered your beloved series too much, Sega do still promise the depth of a Yakuza title, but with just a little pew pew on the side.

Yakuza: Dead Souls is scheduled for a release March 2012, as much as we hated the idea of the spin-off, we love the Yakuza universe so much, we know that we will end up getting our hands on it.