The newest episode in the X³ series is available now to download from Steam, with a retail box on the cards for Q1 of 2012. Albion Prelude produces a new challenge in the XÂ³ universe, and builds up for the launch of the all new X-Rebirth coming in 2012.

X³ Albion Prelude takes place between the old and the new X Universe; a universe in flux, preparing players for things to come, with a new X Universe about to be created. 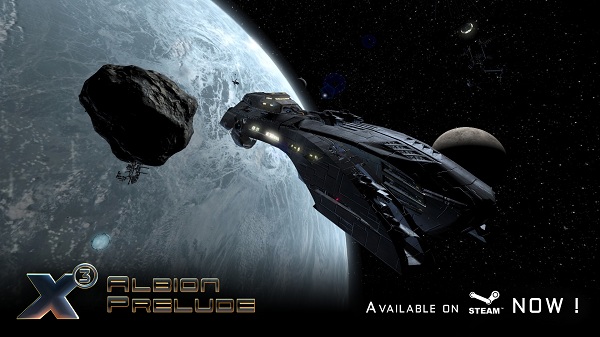 With the war between Earth and the races of the X Universe as a backdrop, you are thrown into a massive power struggle between corporations as they teeter on the verge of a technological breakthrough that will allow massive accelerators to form highways in space and expand the economy to an unprecedented size.

With more than 30 new ships and stations, a new Stock Exchange feature and improved graphics and user interface, X³: Albion Prelude is available now from Steam with a variety of different packs;

In order to play Albion Prelude you will already need a copy of X³: Terran Conflict, if you already own it, then X³ Albion Prelude is available at an add-on price of £9.99.

If you bought the X: Superbox, you can download Albion Prelude for free today.

For those new to the series, you can buy the X³: Terran War Pack containing both Terran Conflict and Albion Prelude for £19.99.

However, if you like things a little more extra special, then you can wait for the retail release of the X³: Terran War Pack, a special retail addition that will be available February 24th 2012 and will include Terran Conflict, Albion Prelude, and the Albion Prelude soundtrack for £19.99.