So perhaps if you are interested in buying it for your PC, you may well decide against it, after all, the two games are readily available. However, this is the first time that a 3D Worms game is available on the Xbox 360, not to mention with achievements, and as far as PC games go, Worms is one title that translates very well to console.

Worms is one of those fantastic series’ that every gamer can say that they have played once in their life; whether it’s reminiscing on the classic Worms, or the pink blobs of Worms: World Party there is a certain fondness for the series that has been running for over 15 years. 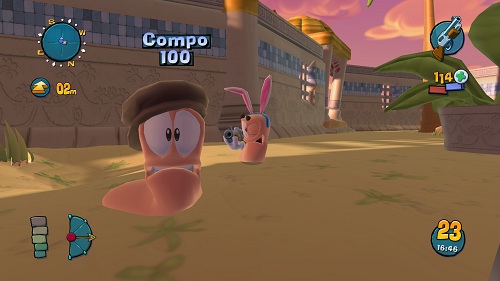 Unfortunately Worms never really worked in 3D, and with common place issues such as awkward cameras, and the problems with judging the trajectories of launched weapons on a 3D plane, there is a lot riding against this surprisingly substantial XBLA title that contains 60 single players missions, numerous challenges, 12 different landscapes, 38 weapons and tens of game styles.

Whilst the 25 Worms: Mayhem story levels, and 35 Worms 3D campaign levels themselves are not all that taxing to the most seasoned of gamers, the challenge mode presents some real hardships, and some of the deathmatches will prove your most difficult adversaries; especially when you are trying to set a good time on them. Finish the story and challenges, and you are pretty much set to leave the small confines of the game, and venture into the scary world of multiplayer. At times it can be ridiculous how accurate the AI's aim can be, which does get extremely frustrating at times, however to be fair, would you rather have a game that is too easy, or one that actually challenges you?

Now the best part of Worms: Ultimate Mayhem, much like any other Worms title is the multiplayer; supporting 4-player local and online you are given the standard worms turn-based formula in five different game modes; Deathmatch, Survivor, Destruction, Statue Defend and Homelands to spice up your gaming, although really, nothing beats a good worm-on-worm deathmatch.

However, all anyone really cares about is the weapons, Ultimate Mayhem includes some fantastic ones including the Concrete Donkey, the Super Sheep and the unbelievable Fatkin strike, unfortunately we were sad to see a lack of an Uzi, or the Firepunch. But best of all, is you can make your own weapons with the customisable options on hand, so whether you want a piece of cheese that explodes like a grenade, or an airstrike of poo, the choice is yours, and it’s utterly liberating. 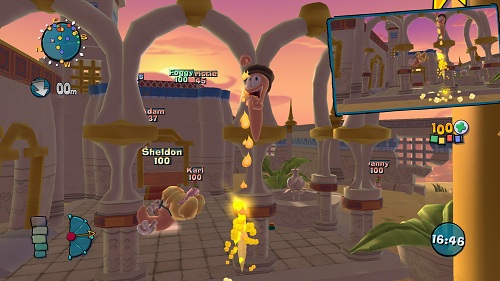 Unfortunately Team 17 did not add any exclusivity to the game other than the loyalty items, which whilst quite a nice feature, are not enough to really ask PC gamers to come back to the two games. The loyalty items are a collection of accessories that you can kit your team out with, they are unlocked by owning other Team 17 games, such as Worms and Alien Breed. The items are a very nice way of rewarding your fan base, but it is a wonder that no new challenges or exclusive story levels were added.

The story of the ‘games’ are not fantastic, to be fair, Worms has never needed a story. However, thankfully they do not take too much away from the game, and the levels in between the fluff are both enjoyable and amusing. Coupled with the hundreds of nooks and crannies of gameplay items, customisable game styles, worms and weapons, you have a veritable treasure trove of turn based strategy at your fingertips.

Whilst the price tag does appear a little steep for ‘just’ a Worms game, it is entirely justified by the sheer enormity of the game. You have to consider that this downloadable title includes two full games, and the playtime alone in single player will keep you occupied for well over 15 hours. 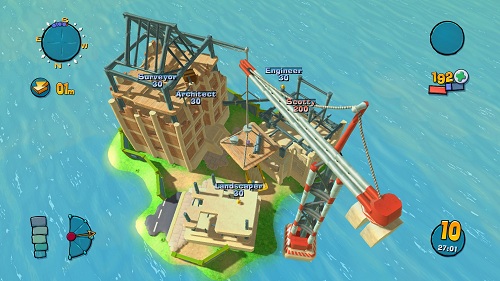 Whilst Worms still remains in the hearts and minds of all gamers out there, the switch from 2D planes to 3D has never proved extremely popular, and the awkward camera and the inability to properly judge your thrown or launched weapons is the only downside to an otherwise genuinely enjoyable and challenging game.