The last time we saw engineer Isaac Clarke, we were witnessing him enduring his own personal madness, whilst battling through a mass of Necromorphs on the USG Ishimura. Players of the original were sitting on the edge of their seats, cautiously edging around each corner for fear of what was waiting for them. Dead Space was voted one of the best games on Xbox 360, in my eyes it actually deserves the title of one of the best survival horror games of all time.

Naturally, following such a critically acclaimed title would be hard to do, and many people were dubious of if this would be done. Thankfully, the developers at Visceral Games don't disappoint, giving us a game full of suspense, tense atmosphere, stunning locations and some truly awe-inspiring Necromorph encounters, Dead Space 2 is a sequel truly worth the purchase. Not only will this appeal to fans of the first, it will also allow new players to get on board the story, thanks to an overview of the previous game given at the start of the game. 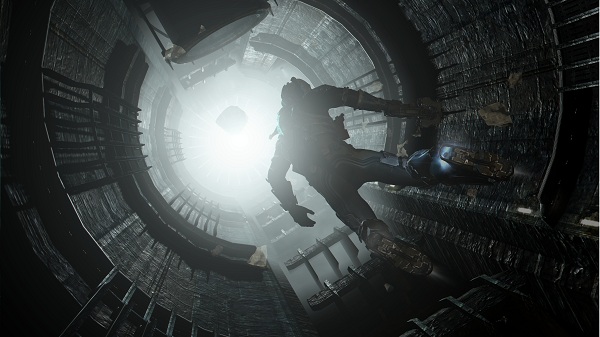 The game begins with Isaac waking up in an infirmary, being rescued by an unknown male. Amidst the rescue attempt, your savoir is killed, and you are thrown right back into a swarm of angry Necromorphs looking to turn you to their side. You are actually doing this with a huge disadvantage, however we won't spoil what this is. The fact that the game sets you in the heart of the action from the beginning is a nice touch, instead of letting it build up gently. This means players have to adapt quickly, and learn when it's wise to run, and when to fight. This is a big improvement from the first game, which many felt held your hand for the first chapter causing you to later choose to fight instead of run.

Players are given a larger variety of difficulty levels that they can choose, dependant on their experience with survival horror games, and experiences with the original. This also creates more playability, as players who start their first game on a lower difficulty, and aim for achievements or trophies have something to work for, as the harder difficulties prove a very tough challenge, even for experienced players. Health and ammo are scarce, and every action you do can either help or hinder you, meaning players need to think of their decisions in advance unless you want to be faced with numerous foes with one clip left in the plasma cutter.

The gameplay hasn’t changed much from the first game, which is pleasing to see, Visceral have used the same successful formula, and made minor tweaks and adjustments, meaning that the game itself is very similar to the original. While this is a great thing, it does at times feel like an expansion to the first game. However, the quality of the gameplay in spite of this is phenomenal. The story flows effortlessly, and just when you think you have reached a safe zone, something comes along to tear the feeling of safety firmly away from you.

Some of the situations you are faced with during the game can only be described as jaw-dropping, thanks to Isaac's new style RIG suit, he can now use a speed boost while in zero gravity, to project himself along. One of the game's set piece moments involves Isaac taking the tram to a safe zone while one of the carriages missing, meaning that you are floating around inside the carriage. As if this wasn’t bad enough, you start to fall, falling through the carriages, while passing Necromorphs who are rapidly climbing in through the windows trying to get to you. At this point you are treated to a nice little section of a Time Crisis style on-rails shooter, cutting down as many Necromorphs as you can while speeding past them. To put the cherry on top of the action filled cake, you finish the sequence falling out of the carriage, hanging by a cable. You would like to think you're safe after this high adrenaline rush, however Necromorphs start appearing from all sides, dashing towards you, while you're hanging in a vulnerable state furiously trying to stave off the mass of hungry mouths. 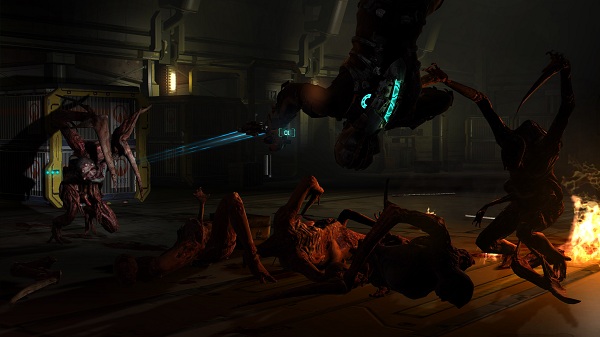 As well as the standard exploration of the Sprawl, and fighting off Necromorphs while trying to escape, there are a few new additions as well. Isaac can now crawl through air vents, which are opened by hacking into terminals, a guilty pleasure of a mini-game. This gives you a nice two minute break from edging around corridors timidly and gives you a chance to catch your breath.

Players are forced to use the torch at times to frantically aim off into the darkness, to try and pick out Necromorphs before they reach close quarters. The sound of a Necromorph running and roaring down a darkened corridor, while you try and pick it out with your beam really does create a pit of dread in the bottom of your stomach. However, sometimes, enemies can be too common, and this does towards the end of the game, kill off some of the suspense. Players can get too used to enemies, and expect to see them pop up from a likely source.

The other part of Dead Space 2 that creates an atmosphere of suspense and confusion for both the player and Isaac himself is the many times you encounter Isaac’s dead girlfriend, Nicole. This happens at numerous points, and we get an insight into how her death has impacted Isaac, witnessing his dementia worsen as his guilt takes over. A particular encounter with Nicole takes place in an abandoned and altogether creepy nursery, which for me is possibly one of the most memorable moments in the game.

Of course one of Dead Space's strongest points was its audio, and that doesn't change with number 2 because it's a sequel, the audio is just as breath-taking and nerve racking as before. Every noise cuts into the players' nerves, adding to the already tense atmosphere. From hearing the soft groaning of an enemy in the distance, or the cries of another possible survivor in a locked-down room, each noise creates the right atmosphere, before launching you into another scenario with an enemy. Many times, players will be casually strolling down a corridor, before a pipe will explode beside you, creating that shock value derived from the first game. It's highly recommended to play Dead Space 2 with 5.1 speakers or some really good headphones to enjoy it at its best. 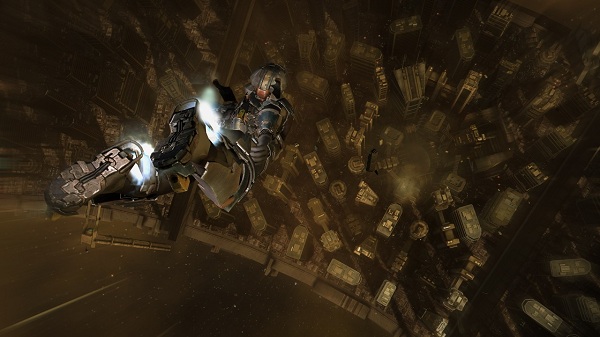 Graphically, the team at Visceral have made a vast improvement. In the first game, we didn’t see much outside of the USG Ishimura. As the Sprawl is a space station, there are many times throughout the game where you can peer out of a large glass window deep into space, which really creates feeling of isolation. Deserted streets, reminiscent of a post-apocalyptic setting inhabit the outside world, whilst inside you're confronted with living quarters' full of desperate messages scrawled on the walls and then of course you have the church, which gives you a bad feeling upon entry.