With Cyanide Studios’ Confrontation just released, they have announced a new game for their roster, heading away from Rackham and back to Games Workshop, in a new, unfortunately online only game; Dungeonbowl. Never heard of that particular tabletop game? Well that’s because it’s Cyanide's answer to the next Blood Bowl experience that is played in a dangerous dungeon to add to the already deadly sport.

Created so that the wizards could find out which Magic College was the most powerful, Dungeonbowl has a few subtle modifications to the standard Blood Bowl rules. For instance, a game is still played between two teams, however the teams are now composed of three races, for example the Rainbow Wizards are made up of Wood Elves, Halflings and Humans. Another very interesting addition to the game is that the first to a touchdown wins the match. 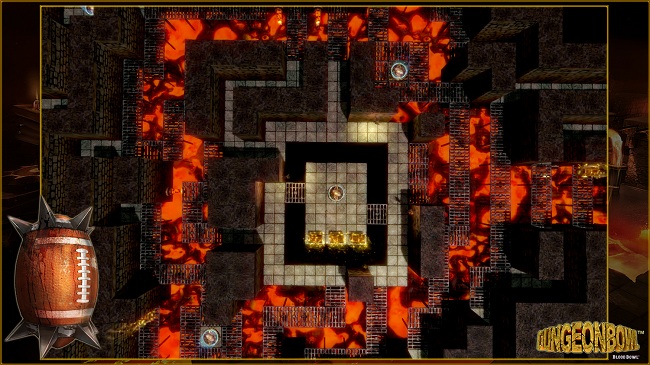 Sounds easy enough right? Well to be fair, scoring a touchdown in Blood Bowl is no easy feat, especially when so many team members are literally out for blood. However in a dungeon, this simple deed is so much harder; the ball is hidden in one of six chests, five of which are booby-trapped. Lastly, movement within the dungeon can be aided with teleporter pads, allowing players to zap from one position to the next, but this is Warhammer, so don’t be surprised when a mishap comes your way!

Taking from the obscure supplement of Bloodbowl the game is still driven by dice play and sequential turns, fans of Blood Bowl should be intrigued of this brand new game that will put a spin on the existing parody of Warhammer and American Football.

Dungeonbowl is scheduled for a release during the second quarter of 2012 for Windows PC, and will be online only. Not sure what to make of it? Well neither do we, here's hoping there's a bit more info before its release.