One developer that is not new to recent influx of karaoke videogames over the past few years specifically for the Nintendo Wii, is Nordic games, the creators behind the We Sing series. Well they now have a new game available which will cater to some very specific music fans with We Sing Robbie Williams.

We Sing Robbie Williams is of course aimed at the Robbie Williams fans in the audience, and to be fair a lot of his work is really quite catchy, from 'Angels' to 'She’s the One' up onto 'Feel' he’s got some great hits out there, that I’m quite sure a lot of people sing along to when they hear them. With a career that spans across 20 years and songs included that span across 8 albums you’ve got enough Robbie to give you hours of entertainment. Of course with it being a Robbie Williams only game it won't be for everyone out there, but most people would only pick up a Robbie Williams game if they're a fan.

The game features 26 of Robbie’s songs each with their own music video playing the background giving you something interesting to watch while singing along to the lyrics, however of course if you don’t know the song off by heart you will have to make sure not to get distracted by the videos and pay close attention to the lyrics on the screen. But with Robbie’s music being a mix between pop and rock the lyrics are generally quite clear and easy to learn.

Being developed by the same developer as all previous We Sing titles, Robbie William’s version of the game is of course very similar to We Sing Encore. Your main options to choose from are Solo, Party, Karaoke and Jukebox appealing to all that could wish to play the game. From only having one Robbie fan in the house, wanting to play against your friends, have some fun calmly singing along or just to have a listen to Robbie's songs while watching the videos. If you’re a fan you can’t really have any issues with the large array of options. 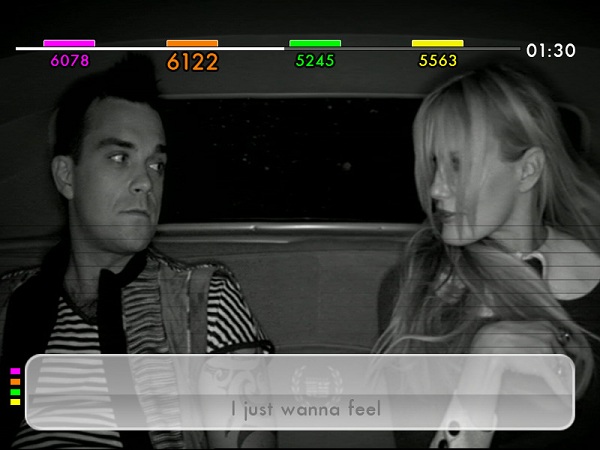 The party mode of course features the majority of different modes for you to play with your mates allowing for competitive play in Versus, Group Battle, Blind, First to X, Pass the Mic, Expert and Marathon. Blind has to be one of my favourites though as you really have to know the song well to do well, so make sure to only do Blind mode on the songs you know well. The large variety in party mode really helps add a lot to the game for if you want to entertain friends for a few hours.

As well as all the competitive play there is a cooperative mode called We Sing that allows you to sing with other players either as different artists in the song (should it have any) or choose to switch places at certain points. This is great for if you don't want to be playing the game competitively and perhaps if you're playing it with younger children.

Of course if you're playing the game on your own in the Solo mode you can still sing through all the songs as you can in the other modes, or you can use it to improve your singing by taking part in the singing lessons. Solo mode is a great way for improving your overall singing and to get used to the songs for when you have friends round to challenge. The game also features unlockable content for example some videos and one of Robbie's newest songs 'Shame', these can then be unlocked after getting a certain amount of awards from playing the game. You can track the awards you have from the menu in Solo mode. 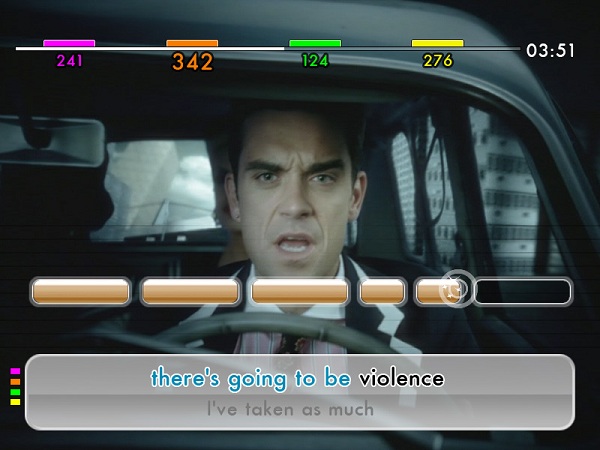 Keeping the same scoring system as Encore you will be scored on your volume and pitch, and lesser so than how accurately you sing the lines, but karaoke isn’t something about scores, it’s down to having fun and a laugh when singing with friends, which is why the Karaoke mode works well as you don't need to worry about a score. So unless you're playing it like a real gamer then you should have lots of fun singing along.

In the end if you’re a Robbie Williams fan or pop music we highly recommend this as it’s a nice combined package which will be a great Christmas present or game to play with the whole family, now all I need is a We Sing Radiohead to come along next and I’ll be content.