Warlock: Master of the Arcane brings a fresh approach to the turn-based strategy genre by creating a visually pleasing fantastical world known as Ardania. The world has turned into a war zone, with fierce creatures coming up from the depths of hell. You must take control of a great mage to become the most magical and powerful warlock in the world and to do that you will need to smite down your rival mages. However I must warn you that this game can be very addictive, one turn tends to turn into another and so on.

The first thing that hits you when playing Warlock is the stunning graphics that has been created to bring this fantasy world to life. It is full of bright vibrant colours; from fiery red lava pits to beautiful blue seas, but don’t let the pretty scenery fool you as it’s full of dangerous mystical monsters. From Leviathans to un-dead skeletons, the world of Ardania is a treacherous place. If you take a stroll about the countryside it’s littered with rat nests, spider holes, liars and lots of other dark pits full of creatures just waiting to attack. I found out the hard way and within the first few minutes of the game a group of malicious imps threw their fireballs while a giant ogre swung his bone-breaking club to kill my precious first batch of warriors, from that moment on I knew this game would be a challenge even on normal difficulty.

One of the most interesting segments of the game is the researching of spells, there are a variety of spells from evasive ones like invisibility, to attacking spells such as fireballs, each spell requires a different amount of turns to be cast and also a specific amount of mana. Spells are extremely useful; in particular the healing spells which have saved my most experienced soldiers once or twice from being slaughtered. There are also special hexagonal tiles which have mines, wells and other resources on them which can give you a special bonus if you build a certain building on them. 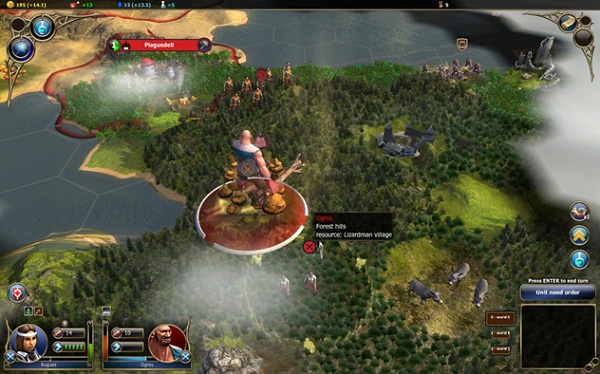 There are three races which you can choose from; Humans, the Undead and the Ratmen. Each race has their own unique abilities that let them take command of their minions and wild creatures. There are three different criteria which can allow you to win the game if you successfully complete one. You can either win by being diplomatic, conjuring the most powerful magic or by being a war maniac and destroying everything around you. I prefer conflict myself so war appealed best for me, although I must say it is difficult, your resources are soon squeezed to the limit as your army grows and there is a constant threat of enemies to fight as they try and take over your settlements.

It’s very easy to keep track of your units in Warlock as they aren't stacked together in large groups. Instead you will have to organise where each unit can go, this can be useful when taking a city or flanking an enemy unit. What I found a little bit disorientating was if you select a unit to move them further than you can in one turn it doesn't indicate how many turns it will take for the unit to get there, but other than that it works well for the more strategic players.

When choosing what type of map you want to play there are a few different settings, you can obviously choose how big you want the map, how many rival mages, but the one interesting part is how many worlds… you heard me correctly, you can have more than one world. By having more than one world it means is you can make the maps monstrous in size, when you are exploring the unknown world you will come across portals which can teleport you to the "other worlds". I didn’t quite know what to expect when I added these into the map, but the portals tend to be heavily guarded by strange monsters and can even have rival mages through them. So, if you fancy a bigger challenge and longer games, simply add more worlds and see how good you really are.

The exploration of Warlock is one of the most enjoyable bits as you just don’t know what you are going to find, especially if you add more worlds it makes the expedition even more thrilling. As your starting city is randomly placed on the map each game feels completely new, in fact you could be placed next to a giant volcano with lava all around and giant sea serpents off the coast (a possibility but not likely). The other alternative is you get lucky and have useful resources right on your door step. 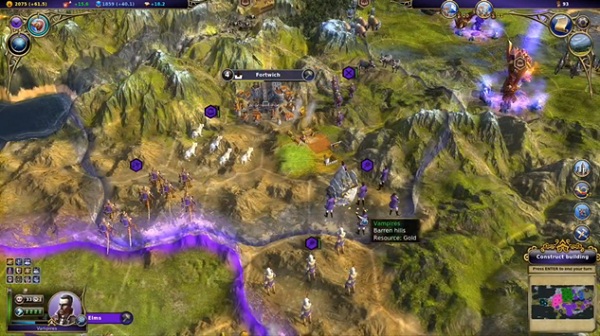 What is unique to Warlock is that it has introduced a clever little quest system, you can either choose to complete them or not, but consequences will occur if you refuse. The quests can be offered by either your advisors or by the gods, if the gods ask these favours you can do one of two things. If you want to be partners with the eight gods then completing their quests and building their temples will help you get rewarded, then again if you don’t fancy complying you can ignore the gods and possibly get in their bad books, potentially losing them as an ally.

Warlock: Master of the Arcane will likely turn 10 minutes of playing into a couple hours as it’s a real time sucker just like it’s counterpart Civilization which is of course the most similar game when comparing Warlock to other games out there. Overall it’s a great game and highly addictive while adding interesting splashes to the turn-based strategy genre. Ino-Co Plus and Paradox Interactive should be very happy with the end result as it has captured the best elements of strategy and assimilated them into a fantastical world.

Warlock: Master of the Arcane is available on Windows from most retailers and digital distribution websites for around £14.99.