Recently I had the chance to check out a very special upcoming PSP Minis title which literally hours ago finally had its name announced, and that game is FuturLab's newest game Velocity.

All the way back in September 2010 FuturLab announced a competition where fellow game players could provide a name that they felt would suit a futuristic shoot 'em up that features a 'unique teleportation mechanic'. Well finally the day has arrived that FuturLab have announced the winning name, and I was very lucky to have the chance to play an almost finished build of the game recently. 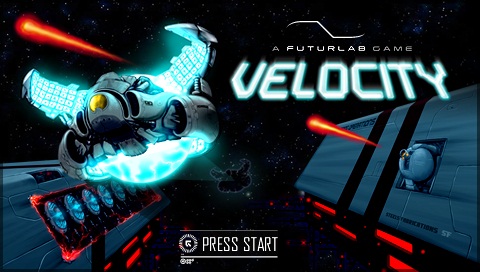 FuturLab are a developer perhaps best known for the PSP Minis title, Coconut Dodge; a super-fast paced game where a crab has to dodge coconuts and collect gold and other treasures. Well since the release of their first game they've worked on a port to iOS and their new game Velocity.

Velocity is a vertical scrolling shmup with a few added extras to make it stand out as it includes a boost, jump and teleport, features that aren't all that common within a shmup. However they aren't any old additions they chucked in to try and add in a bit more gameplay, they've helped evolve the shmup genre to appeal to a wider audience and create a well-balanced enjoyable experience. You won't get bored of killing wave after wave of enemy as the levels are balanced out in an order to give you a variety of gameplay.

Alongside the usual killing waves of enemies other levels within Velocity are also speedrun based; relying on your quick reactions, or puzzle levels that make you feel really clever for solving those little problems. Throughout the game a few things stay consistent though, which is saving survivors from the derelict space stations that you're flying through. 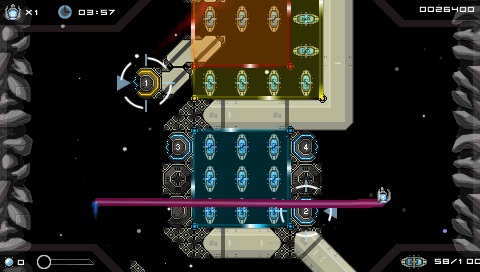 Visually it is just what you would expect and want from a shoot 'em up, at heart the genre relies on pixel art which really sells it, the amount of detail put into the artwork is astounding. The ship and environment make you feel like you're playing R-Type yet the extra detail then makes it look more current and defined. Not only is Velocity visually appealing but the music helps round off the whole experience, an addictive array of music is played during play that literally gets stuck in your head for hours, but even though you hear the music so frequently it doesn't ever feel repetitive.

By giving the game a boost function you have more control of the screen than you would with a normal shmup, you can either let it run at a slow pace to allow you time to make jumps and pickup all survivors, or you can keep your finger down on the right bumper and speed through the game trying to get the best time possible. Not all survivors have to be rescued in the level; however you are given a quota, so if you speed through and leave all those poor helpless people behind you may have to retry the level.

My favourite addition in Velocity is the puzzle element to the game, from setting down a telepod you can take alternate routes through a level and trigger switches in their correct order, or use them to make sure to save all the survivors, it really helps add a layer of thought to a shmup, on top of keeping yourself alive. Also if your memory isn't up to scratch, when you've found switches they display on the map allowing you to easily remember where each switch is. 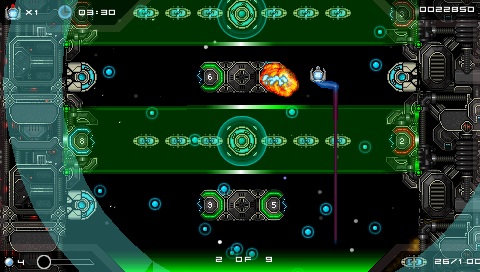 Similar to a few select shmups that allow you to shoot in a variety of directions, Velocity addresses this by adding a bomb feature which is an unlimited weapon that can be fired off from a touch of the Circle button and a press in the direction you want it to fly off to. This then allows you to kill enemies that have passed you for that extra little bit of score, enemies or switches to the left and right, and as a quicker method to break obstacles.

Each new mechanic to the game is introduced slowly over time giving you ample time to get used to the controls. The most interesting aspect of the controls was combining them altogether so that you could get the best score for a level. I always like to play things safe first time round I play a game to ensure I don't die, but then combining the boost with the jump and getting your timing exact is a great feeling. Of course you feel a little silly when you jump too late and crash into a wall ending in your eventual death.

I really enjoyed playing Velocity, in fact I enjoyed it so much that instead of playing it for an hour, it turned into almost four hours and I still didn't want to put it down!


Velocity is going to be out for PSP Minis on March 7th for an unannounced price, or for free if you're a Playstation Plus member, we can't wait to check out the final game in the next few months. Of course even though it’s a PSP Minis title don't let that put you off if you don't have a PSP, it's playable on Playstation 3 and Playstation Vita as well, allowing you to play it on the go or in the comfort of your own home.