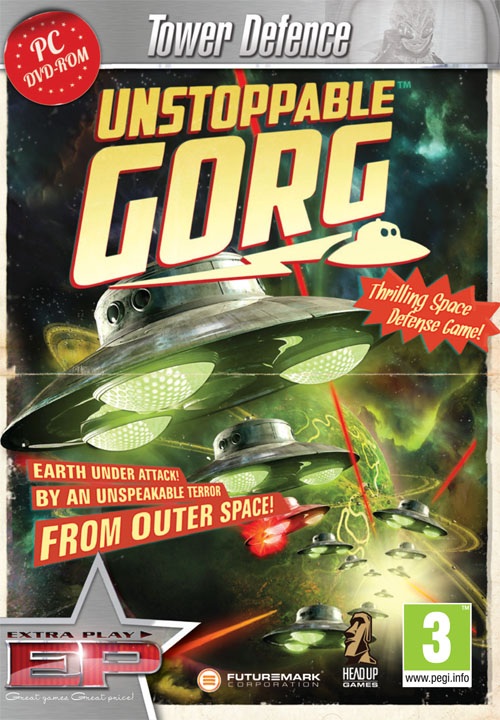 Unstoppable Gorg is Futuremark's first foray into the tower defense genre and, for the most part, they have flourished with their fun new take on the well established game style that harkens back to the era of cheesy 50's sci-fi B movies as you play through in the guise of Captain Adam. As the Captain you have to travel from space station to space station putting a stop to the relentless waves of Gorg and other enemies that threaten Earth.

The game starts with a small selection of defensive turrets, a research turret and a solar turret used to gain energy. Energy is the currency of the game and is accumulated alone by solar turrets that accrue energy every few seconds, think Plants vs Zombies' sunflower. As the game goes on, newer turrets are accorded to your arsenal, each of these turrets can be upgraded using research points. Research is carried out by the research satellite, much like energy it is a slowly gathered resource, but it can only be spent before your next battle where you must decide to which of your turrets you would like to upgrade for the fight such as, granting satellites extra damage or health. 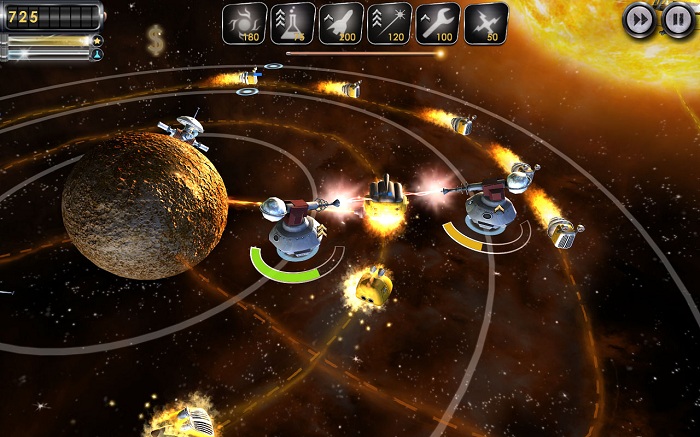 There is a brilliant twist to Unstoppable Gorg that separates it from other tower defense titles; rather than being totally stationary, as is traditional, all of your turrets are set on a plane of orbit which you can control. Meaning as you play the game you have to plan the position of your turrets while factoring in their potential orbital axis. Having to move your satellites on the fly is a fun development to the typical game style and requires a consistent application of skill rather than just an initial plan, which adds a whole new level of depth to the game.

As you progress through the game the satellites you unlock are able to perform a wide variety of functions, from slowing down enemies to performing repairs without having to use any of your valuable resources. In total there are 20 different satellites available and, while as a number, that may not sound like a lot; it actually grants a great level of variety to the game.

This seems like a good point to discuss the strategy side of the game. Typically the genre of tower defense has always been very strategically orientated but very few have had the need to balance not one but two types of resources and this leads to some very interesting gameplay. Having only a limited number of slots available for placing satellites during a battle means that you have to draw a fine balance between the number of resource gathering satellites and the number of defensive satellites. 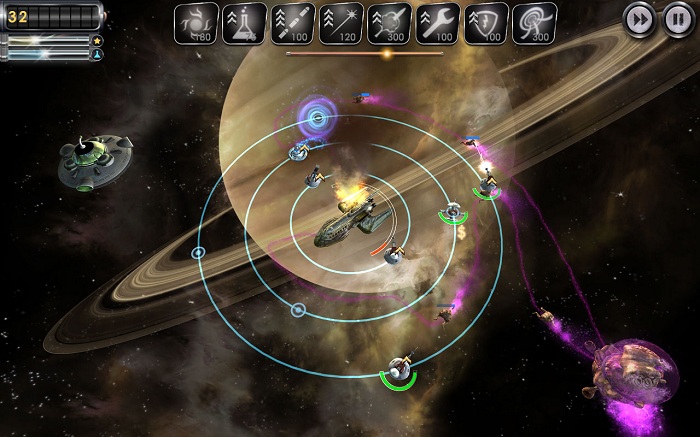 This allows for a great deal of variation with the aforementioned balance, for instance most would elect to have a steady stream of income as the mission progresses, purchasing a few energy gathering satellites until the trade off between space and income is a suitable equilibrium. However I tend to play on the greedy side; I build large numbers of resource satellites at the beginning of the game and as such there are very few slots for defensive towers, thus I have to concentrate on a small number of them; upgrading them to their highest level using my larger flow of energy. As the level goes on I work my way inward building and fully upgrading more and more satellites with my reserves of energy, making room for them by slowly selling off the energy satellites built early on in the game. Thus as the waves of enemies get more difficult and my blockade becomes more deadly. Eventually there is no income and nothing to greet the enemies but a maze of death during what would normally be the hardest part of the mission.

The game has a unique aesthetic paradigm, one that is achieved remarkably well. Though I have to levy some criticism on some of the models however; some of the enemies appear bland, with a rather basic model that does not contain much detail at all, the same can be said for the satellites that are also lacking a little. Because of this, sometimes it hard to differentiate between your satellites because either the models are too similar or the game requires you to be zoomed so far out that any detail is rendered meaningless. Beyond that the visuals are brilliant thanks to the cut scenes throughout that are a compilation of stock footage and sequences of Futuremark's own creation that seamlessly weave together to create a truly delightful cinematic experience. This feeling is carried throughout the game to the interface, the mission briefings, the narration and almost everywhere else.

The awesome thing about Unstoppable Gorg is that the game is filled with trade-offs and tactical decisions like the one above. This makes it very attractive to people who enjoy a good tower defense and the tactical conundrum they offer. However there are a few balancing issues with the defence satellites, some are, or quickly become redundant as you progress; either they scale poorly or their functionality is just not part of a viable strategy. 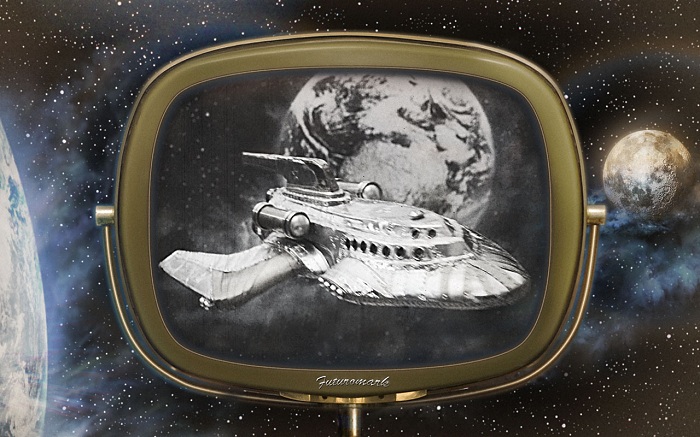 It is clear that a great deal of love and care was put into the design of the main game especially with its art and aesthetic feel, the cutscenes and their accompanying sound is excellent however whilst fitting, the music is very repetitive. Which leads onto the biggest criticism of the game; the lack of polish, perhaps with a few additional tracks, some better attack sounds for the aliens and turrets, and greater detail on the units would have also helped to make the experience more immersive.

Do not let the small list of criticisms deter you from trying out this fantastic game. Unstoppable Gorg offers a whole new spin -pun intended- on the typical tower defense genre, and it offers a unique and particularly difficult challenge. The unique art and style of the game is so well done that it is impossible to draw comparisons to any games of recent, this delightful mix of high quality art and gameplay certainly make it a title worth checking out.

Unstoppable Gorg is available now from all good retailers thanks to Excalibur Publishing and various online distribution sites such as Steam for the RRP of £6.99,