Well we all knew it was going to happen eventually, party games are truly invading Microsoft’s Kinect peripheral with Twister Mania, and the previously released Hole in the Wall, with many more to come.

Twister Mania re-imagines the classic Hasbro party game Twsiter into digital form keeping the uninhibited physical fun that you encountered at numerous a party with the original board game.

“It’s hard to think of a more popular, cherished and culturally significant board game than Twister. I myself have fond memories of the laughs and outrageous fun I’ve had when playing with friends and family,” said Jesse Sutton, CEO, Majesco Entertainment. “Our game introduces a brand new play pattern that is perfect for what Kinect was designed to do. Twisterâ„¢Mania for Kinect is as much fun to watch as it is to play and it’s shaping up to be one of the most contagious Kinect party games released.”

Supporting up to eight players, the game’s 3 game modes contain 16 variations with over 1800 shapes to play, so get ready to duck, squeeze, contort and move your body to match your opponent’s silhouette, knock down blocks and fill in thousands of shapes of all sizes and themes. 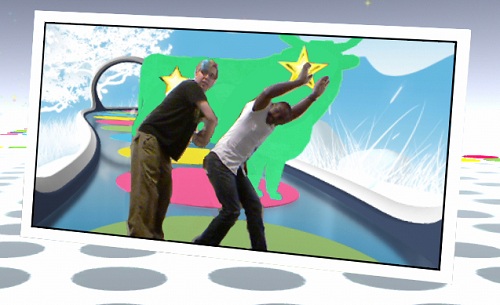 Looking at the screenshots it doesn’t look too close to the original, so don’t go expecting the fun and hilarity that ensues with some drunk twister. However if you’re looking for a fun, multiplayer Kinect title then you probably won’t go wrong with Twister Mania when it is released November 2011.