If video games had to carry the same kind of health warnings that everything else fun seems to have to these days, it would read "Triple Town is highly addictive… Don't Start!".

Triple Town, like all the best games (puzzle or otherwise), has a deceptively simple premise; create groups of three (or more) matching objects of the same level to morph them into a single object of the next level up and carry this on ad-nauseum — three grasses become a bush, three bushes become a tree, three trees become a house etc.

However, this simplicity belies the tactics that you will have to employ in order to master the game, and placing items down randomly will only let you get so far... You're going to have to play Triple Town like a game of chess, planning a few moves ahead in order to get yourself one of the fabled "Floating Castles" items — the pinnacle of the objects that you can get in the game.

There are also objects that hamper your progress. Wild Bears have to be placed and will wander around your settlement and stop you from placing items where you want (and have to be removed in groups of three as with the other objects), rocks hinder your progress, Ninja Bears bounce about and prove to be a nightmare, and even an incorrectly placed power-up item will stop your meticulous plans in their tracks. 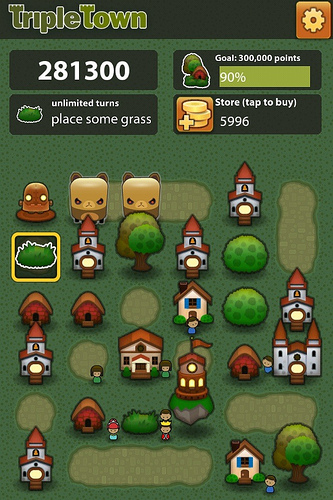 You are rewarded for completed rounds with in-game gold and there is a basic system that allows you to buy items you want / need. You can also use real-world currency to purchase the gold. I never found myself really needing to use the store as I was treating the game as a much more casual affair. Though those wanting the full, elongated experience will more than likely need to purchase items in order to get them out of a tight spot.

In terms of balancing, Triple Town is about as tight as you can get. The difficulty curves upwards at a rate that is challenging, but you never feel overly daunted by it. You'll almost certainly get the object you need to get you out of trouble the first couple of times, however if you constantly rely on this method you will find it harder to succeed as the game toughens up the further you progress. It's rare to find any game that feels as well tuned as this one, and other game lovers and developers (indie or otherwise) should certainly play it.

The graphical style of Triple Town is delightfully simple, crisp and cute, and works well across the various platforms that it is available for. The little additions of the villagers running about, and the comical animations of the bears themselves add a depth to the visuals that other games of a similar standard don't.

The sounds for the game follow in the same ilk as the graphics; short, sweet and simple. The lack of any music in the game perhaps lets it down slightly — a jaunty, Kakariko Village-esque tune would have certainly added to the charm of the game, though the sounds of the bears scaring the villages amuses me each and every time.

The HUD and menus are kept sparse and effective — something that a lot of games available for similar platforms always seem to fall down on. I played Triple Town on my Android phone and found selecting icons and options to be no trouble at all.

Triple Town is a free download, but you are limited to a certain number of turns, which does increase, but at a phenomenally slow rate. A payment of $3.99 unlocks unlimited turns and effectively gives you the full version of the game, though you don't get anything else for your money. This is the one area of the game where developer Spry Fox seems to have got it wrong — extra incentives to pay for the game, such as a pre-set scenario mode would certainly add to the value for money, especially as you can simply leave the game on "idling" and build up your bank of turns again. However, given the fun had with Triple Town, this gripe is a pretty small one.

I had great fun playing Triple Town and will certainly be keeping hold of it for those moments of time that I need to kill. A time vacuum it may be, but that shouldn't hide the fact that this is a solid, endearing and above all fun puzzler that will test your skills and warm your heart.

Triple Town is available for iOS, Android, Facebook, Google+, Kindle2 and Kindle 3 so download it and give it a whirl, you'll only loose a little bit of time if you do.