Just when you think you are safe, the slow rambling and the groan of a zombie is heard around the corner, but you're out of bullets and are almost dead, your only hope is your baseball bat, unless there's more than one of them, and in that case you're screwed. Then you remember you can pause the game, assess the situation and go about your shuffling zombie slaying tactically. It's so long run and gun, hello moveable cameras, if only every zombie invasion was this convenient and thought out.

Trapped Dead is a new zombie RTS.. yes zombie RTS from the German Headup Games, in Trapped Dead you control up to four individual characters, think Commandos, but instead of combating the Axis, you are knee deep in a zombie plague. Played on an isometric playing field you have the whole map at your discretion to plan your strategy and execution in advance. 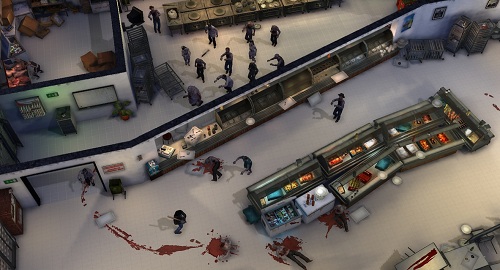 The story is relaid to you through comic book style panels overlaid with the dialogue spoken and the characters, not as extreme as Max Payne, but getting close. These add a nice touch to the 80s aesthetics that attempt to creep in throughout the game. However, artistically the game excels most in the beautifully modelled locations that feature throughout, you've got your classic zombified locations such as the Hospital, as well as a Gun Shop, Prison, the brilliant Mall and more. Each location is presented with the skilled recreation of a typical Midwestern town, pickups are sparse and elusive traps are even sparser, everything is present for a reason, there are no unexplainable ammo caches, unlike most survival horror games.

Each area is played out like a separate chapter in the game, and your characters regroup at their secret bunker in between missions, allowing you to reassess inventories in a safe environment and consider who the best characters are to take out in the next level, this is a brilliant feature to the game and it is fantastic to watch your bunker slowly fill up with characters as you traverse levels and bring them to safety.

Rather than simple hack'n'slash mechanics Trapped Dead features more of an RTS styled combat system where you simply tell your characters where to hit, and they will destroy their enemies at your command. Of course the zombies will hit back, and with certain weapons acting slower than others it is up to your own tactics whether you send in your characters with close combat weapons and chance it, or keep the zombies at a good distance with guns. Although you can control up to four characters at a time, if one is to fall to the zombies you will have to restart from your last checkpoint, keeping you from running into a crowd guns blazing.

In order to tackle the old Resident Evil tactics of running past all zombies to your objectives your characters have stamina that is drained as you run or use close combat weapons, to make matters worse, if one of your characters are attacked by zombies there is a chance that they will start bleeding. Bleeding can be stopped with a first aid kit, -which incidentally is not used to heal wounds- however if you cannot stop your character from bleeding then all zombies in the vicinity will be able to smell your blood, and will swarm on-mass to your location. 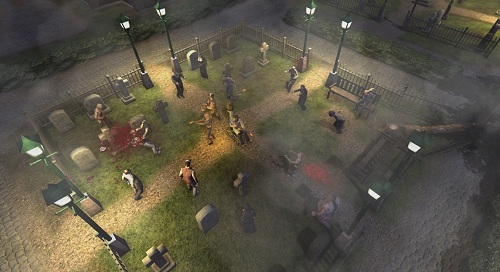 This isn't your normal run of the mill gun-down-zombie shooter, Trapped Dead relies on your ability to work tactically and plan ahead using the minimum ammunition possible, and taking advantage of the cleverly placed traps that are few and far between. With seven different playable characters you are given another layer of strategy by choosing what attributes you deem more important than others; each character has their own strengths and weaknesses, and most importantly, only one can use first aid stations!

Trapped Dead features a brilliant pause system, similar to Bioware's KOTOR, allowing you to assess your situation at any time, and hand out orders to your controllable characters. This gives the most seasoned of strategists perfect time to look over the territory that you will need to take over, and plan your defence as zombies spot you. Without this feature the game would be absolutely terrifying, and it is only with the pause menu that you will literally stand any chance in the quiet suburban town of Hedge Hill.

Movement is achieved on the mouse through a click and drag system, and the game camera is controlled on the keyboard, unfortunately you have no option to change the controls which makes the game slightly clunky and pretty much unplayable with laptop users.

Also with a distinct lack of hotkeys you will need to pause every few minutes to reassess inventory issues and equip weapons. This is also raises a problem for control of your characters; whilst the function keys are used to select one character -which is very handy- there however is no key to select all of your characters. It is little niggles like this that bring the fun of Trapped Dead down, and makes controlling your characters somewhat of a chore.

However if you drop the use of controlling each character and opt for playing with friends co-operatively the game suddenly gets much better, finding four players to play with you will be slightly difficult to set up, however the game does get a lot easier when you have a human player to rely on. The co-operative mode of the game is undoubtedly the best feature in the game which would otherwise be far too difficult and frustrating without it. 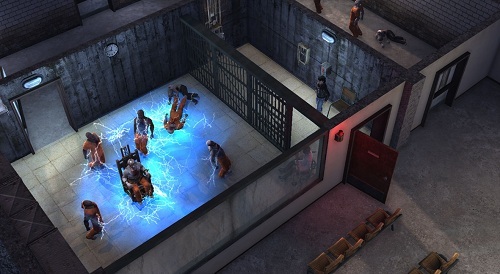 The save system in the game is cleverly worked into the story, and requires you to find manholes or other safe spots to save your progress. However these areas can only be used once, and when there is a crowd of zombies between you and the next save point that keeps getting the better of you it gets frustrating that there are far too few save points throughout the levels, the inclusion of a free save system would have worked much greater in a game that literally throws hoards of zombies at you.

Just because the game relies on tactics and you have the handy pause function, doesn't mean that busting zombies is going to be an easy ride, quite the contrary. Trapped Dead is very difficult, and with no difficulty settings things aren't going to get easier if you get stuck. Eventually you will resort to tactics like bottlenecking your zombie foes, and yearn for traps to take advantage of the zombie hoards.

Trapped Dead is rooted in all-American 80s cult movies, played on a backdrop of soft metal, and is full of grungy stereotypical characters that fans of zombie flicks will feel right at home with. However something just isn't right, and whilst some aspects of the game are fantastic, they are dragged down by others. Once you get into it you'll love it, but the difficulty of the game will sway most away in frustration, almost great.

Trapped Dead is available February 25th for Windows, you can pre-order it from the Iceberg Interactive store now.