Tired of playing Sim City 4 over and over, have a great respect for trains? Well we’ve got one new game that breathes life into the city management genre, and gives you all the beauty, simplicity and advantages of rail transport. That game is Train Giant, brought lovingly to Western shores thanks to UIG, it is the latest in the series in the A-Train series; a series so big in Japan, that you’ll probably never of heard of it. So, welcome to the weird and wonderful world that is A-Train 9.

Now it’s best you do not confuse A-Train 9 with your standard city management titles like Sim City or Cities XL, A-Train is a simulation game that deals with railroad management at its heart, and urban development is a mere fraction of the game that requires three main needs; supply and demand of materials, delivering power to your people, and ensuring that through transportation and the beautification of your city, you will guarantee a constant flow of people. 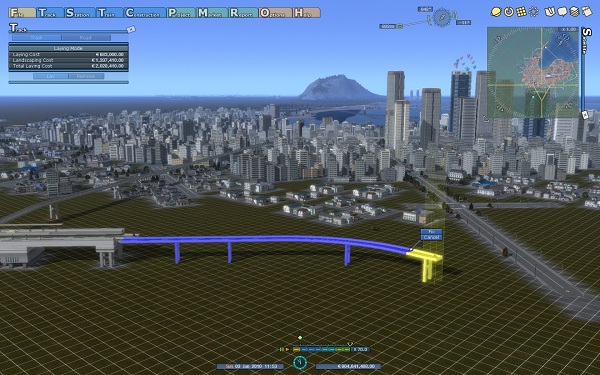 Materials are where A-Train is vastly separated from your standard city building game, rather than simply having to front money for the construction of buildings, you are unable to build anything unless your city has enough materials. Materials are made in bulk in factories, in order to supply the erection of a structure you need to ensure that these materials are taken from the factory to a warehouse where they can lay in wait to be used in that hotel by the lake, or the 24-hour supermarket to pull your retail numbers up a notch.

When it comes to power, it’s fairly common knowledge that a city without power cannot grow, if your city is not lit up at night, it will not attract visitors, and this disrupts the flow of people required to truly make your city grow. Of all three needs, the flow of people is by far the most important, and what makes A-Train so unique, rather than the standard if you build it they will come aesthetic of Sim City, A-Train demands you to connect your various areas and towns with railtracks and roads, and these will stimulate a ‘flow of people’, make the view from the train attractive with built up areas and high-rises and they may stay. Then it is simply the case of watching your city grow.

Once you have ensured that power, materials and people are supplied you can begin developing your city to turn around a tidy profit, this could be from buying and selling real estate, working the stock market, or just ramping up your commuting trains. Absolutely everything that you own is driven by money and can make a profit; it’s just the case of getting your businesses noticed, and ensuring a steady stream of materials via goods trucks and freight trains, and a flow of people through trains and buses. It sounds so simple when you explain it in such straightforward terms, however actually beginning with the game can be a little daunting. 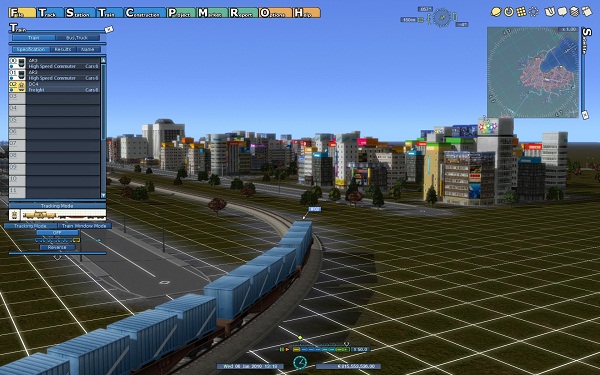 I won’t lie to you, you are not going to understand A-Train 9 at the drop of a hat, and in order to grasp everything you will need to invest time into the game; experiment with your city, read up on the different nuances of the game in the two manuals provided, and simply soak in as much as possible. It’s a lot like the critically acclaimed Crusader Kings II, if you go to the game expecting the same experience that you get from similar titles in the subgenre, then you are going to sit confused for a few hours. The A-Train series is a unique breed of management games, if you go into them without reading up first; you are going to disregard the beauty and distinctiveness of the experience, like so many reviewers have done in the past.

A-Train 9 demands a certain mindset for play, and in order to achieve that state of mind is to understand the importance of trains; a city without rail transportation is pretty much doomed for failure unless you are an expert strategist. Trains open up a world of unused potential to your visitors; if your hotels in your amusement district are making a loss, stick a rail line in, place a few attractive buildings around the tracks and suddenly people will start flocking there.

Many things will get lost in translation, and Train Giant is no exception, unfortunately it is not the same powerhouse that the original A-Train 9 is, it has lost a fair amount of trains, and compared to the 100+ passenger trains available in the original version, Train Giant gives you a small fraction of these, instead what we are given in return is a selection of exclusive ‘special missions’ for us Westerners that cannot cope without clear goals based scenarios, the scenarios are not bad per say, however they appear to be deviating from what seems to be the true spirit of the game. 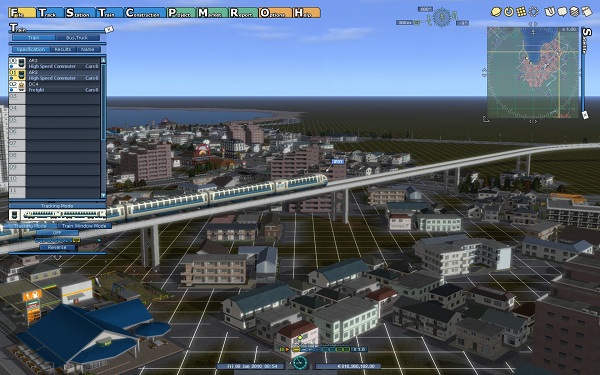 Now amongst the special missions there are some very loose scenario maps that give you a true freedom of choice to what you actually want to do, which promotes a truly refreshing laid back approach to city management that you'll perhaps be a little unfamiliar with, because there is no set winning condition; if you go into the red well it’s game over, and if you get 100 trillion then you 'win', however you can choose to continue playing, allowing for a literal sandbox of creation, there is nobody telling you what you should and shouldnt be doing, you do not have to cut spendings on road maintenance to afford that Golf Course, you just do what feels right on the chilled out soundtrack, watching the world turn.

However the game is not just about scenarios, making profit and developing your city; a lot of the existing Japanese fanbase use the game to create lavish cities and beautiful landscapes with the map editor. In this mode you need no materials, no power and no money, with the whole catalogue of buildings and transportation at your disposal; you can make a green utopian metropolis, or the road you live on. A-Train gives you a true city builder with none of the worries; unless you decide to take your utopia into the game, but why would you do that when you can simply admire it from the window of a train.

Then there's the train fan's dream that is the scheduling system that allows you to schedule any transportation under your control with as much detail as you'd always dreamed of. The scheduling manager then allows you to chose which stations or stops your vehicle uses, how long it should stop for, and how often it should take its journey in a day. It is easy to get caught playing around with your trains for hours as you schedule them up, and who needs Railworks when you've got A-Train's combined map editor and schedule manager!

I have not even touched on managing to secure the Shinkansen line in your city, the flood of information that can be gained through the reports available, or the tens of different ways that you can simply enjoy the game. A-Train 9 is exactly what you make it, with beautiful graphics, relaxing music and a truly sprawling city on your hands; it is a sincere piece of Japanese games development, which you won’t find anywhere else. Invest a little time with it, and you will fall in love, you’ve just got to let it bear with you as you learn its nuances.

Train Giant is available now in all good retail stores, and digital distribution channels such for the RRP of £19.99.