Many months ago I was shown a trailer of a WiiWare title that was soon to be coming out, and a couple of days ago I bought it, and that game was Tomena Sanner. 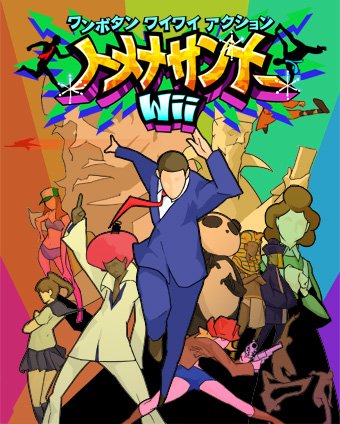 I had honestly forgotten about it, as it was so long ago, but I was browsing the Wii Shopping Channel and came across it. Firstly I would like to point out the price, it's only 500 Nintendo/Wii points, which as long as you buy your points off the channel itself is only £3.50 (If you purchased a Nintendo points card from a retail shop, it would be costing you £5.00)

Take control of business man Hitoshi Susumu who is behind schedule and won't stop running until he gets to his ultimate dance party!

As the quote from Nintendo Europe's website states, you play Hitoshi Susumu, and you must get to his ultimate dance party, which sadly he is running late to. This helps establish the knowledge that you are aiming to be as fast as possible, which of course is the ultimate goal. The real simplicity however is that there is only one button press needed while playing, which is the A button. The player must simply press A just as they are about to run into a person/animal/object/whatever that's in your way. Dependant on timing you get different results, which results in either a miss/good/great. 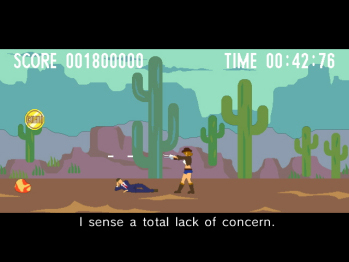 Tomena Sanner has some of the most addictive and upbeat soundtracks I've heard in a game recently, this could be on the basis that I left it playing to itself while I was doing work around the house, or it could be that the main theme reminds me of the Rocky Theme, either way the game features very short pieces of music but it was great for motivation, which suits the game perfectly, it's all about speed, movement and motivation. 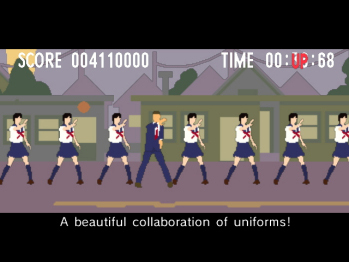 The animation and visual style are very polished and appealing to look at, I did notice when scanning the credits they used mo-cap, which I'm sure really helped with the fluid movements of the characters dancing and moving around.

The first time I played it I found it a little hard as I wasn't used to the way the game plays. I felt this was slightly because I've played a fairly similar game in the past which is Rhyme Rider Kerorican. The game plays almost identically (bar different button presses), the only real difference being that with Kerorican there are cues in the audio to when you should press the needed button. As it's a rhythm action game, so the dodging of obstacles/enemies goes to the beat. 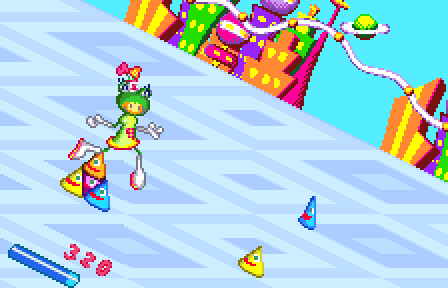 Unfortunately nothing in Tomena Sanner goes to a beat, but still I'm just comparing it to another game, it isn't necessarily a bad thing, just I do enjoy games that move to a certain rhythm, after a while of playing I will have my timing spot on.

I did manage to finish the normal mode in one sitting, however this was after various failures of some levels (I found level 1-2 the hardest). The difficulty really comes from judging when the button should be pressed, as with some items it's hard to judge where the point of button press is. Turbo mode however is a lot harder, as the game gets quite fast in the normal setting. I have yet to finish the first level on turbo. 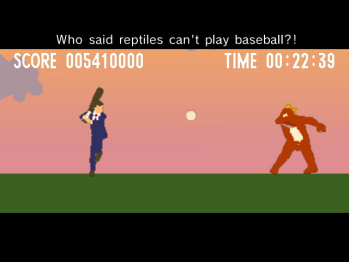 You may also notice from the images I've posted up that while you’re playing the game and you interact with the characters/things a sentence of writing scrolls across the screen, this adds more to the pure craziness of the game, and I recommend having another person in the room to read them out, as when playing you don't have the time to enjoy reading.

My only real nag is I would have liked the opportunity to start from level 1-1 and then when it finishes and you get your score etc it could then go straight into 1-2, instead of having to select 1-2. I understand why this may have been done, for many reasons to help the developer in some problems they may have faced. Of course there is the endless play mode that you can unlock, but that's a whole different mode altogether.

Tomena Sanner is an extremely polished game that I'm going to play again and again until I can have a better high score (that darn Izzy at the top of the boards, I will beat you one day!). It is definitely worth the 500 points (£3.50) that they're charging for it.