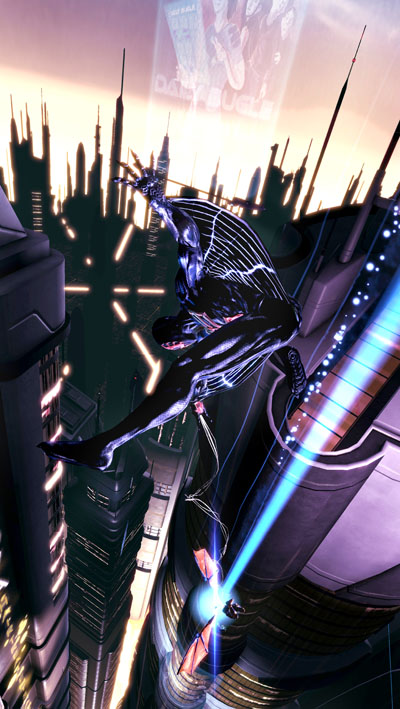 Following on from our original announcement on Spider-Man: Shattered Dimensions Activision have finally announced the third Spider-Man variant to join the two web slingers we already had.

In the line-up so far there was everyone's favourite Amazing Spider-Man, which of course will appeal to all fans of the series, along with the fact that he's your everyday Spider-Man that we can all recognise from his suit.

And finally yesterday Activision announced that the third (but not final) Spider-Man is the 2099 variant. Which follows the story of a Miguel O'Hara (not our usual Peter Parker) who found himself in an accident that put him in a similar situation to Peter. Comparable to our usual Spidey he has the strength and agility, and web-slinging ability, however with a lack of 'spider-sense' he makes up with retractable talons in his fingertips and toes as well as a deadly bite that can paralyse his foes.

The fourth variant has yet to be announced, and we can't wait to hear who else is placed in Spider-Man: Shattered Dimensions (I still want a Marvel Zombies version) as the line-up so far is very interesting.

Spider-Man: Shattered Dimensions is due for release on Playstation 3, Xbox 360, Nintendo Wii and Nintendo DS this September, we hope more news will arise and perhaps some gameplay footage will come out of E3 next week.