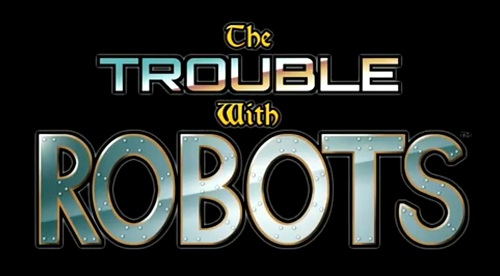 We all know that film and television dictates that the day that robots become self aware they will rise up against their human masters and revolt with death and destruction, and they most definitely do not uphold the three laws of robotics.

And so, Digital Chestnut are pretty pleased to unveil a trailer for their upcoming game The Trouble With Robots, a deck-building card game for the PC inspired by collectible card games and full of side scrolling real-time gameplay.

" frameborder="0" allowfullscreen>Trouble With Robots is set in a fantasy world where people are having a bit of trouble with foreign robots that arrived via a giant spaceship, unfortunately they do not grasp that the magical human world that they landed on is not the same as their more civilised high tech society, so they attack.

With 40 collectible cards in the game, players will prepare for each level by building their deck that determines what sort of army they will summon and what supportive spells can be used. With rich fantasy summons ranging from trolls to dragons, and even elven archers or centaurs to defend against the growing robotic threat, it looks like a pretty interesting little game.

Taking place over 18 story levels and 4 challenges, The Trouble With Robots will take players across a variety of locations against increasingly powerful robots, the game is not yet dated for release, but will be coming exclusively to the PC.