Help! Voldetron and his robotic underlings have invaded Earth, and us stupid humans with pitchforks and nonsense can’t tell a good thing when we’ve got one, the robots are foreign, and they're carrying out preposterous deeds like setting up wireless hotspots and putting up no smoking signs! It is absolutely disastrous! They’re a foreign threat and have to be stopped, so get ready to build up your deck.

That’s right, The Trouble with Robots uses the underused mechanic of deck building, which is far too scarce on PC, this is combined with the sentiments of a tower defense and gives some absolutely wonderful results with a good selection of cards, colourful enemies and a host of entertaining battles that are just what the doctor ordered. 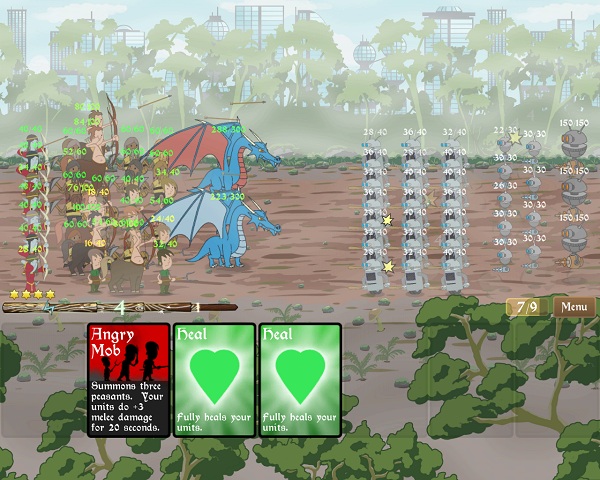 Whilst the game is not very taxing to understand, for those unfamiliar with the concept, there is a very brief and useful tutorial that will get you up to speed in about 2 minutes, which is pretty much as long as you need your hand held for, the game roots itself on simply learning and doing, giving you a host of humorous levels in which to study the essential cards that your deck cannot simply live without.

With a large selection of cards at your disposal you'll get to pick and choose anywhere between 5-9 cards that will make up your deck for the stage that you are playing, and each stage is made up of a number of waves that will pick three random cards to your hand to counter the robot threat.

It's not quite a simple as it sounds, if it were, you could use your cards willy-nilly; the use of the cards that you play is dictated by your magical wand that regenerates power with time, each card costs a segment of the wand, however this power is not strictly limited to playing cards, and if you feel a little violent and have loads of power to spare you can also smite robots with single bursts of lightning for a little destruction when your hand is empty. 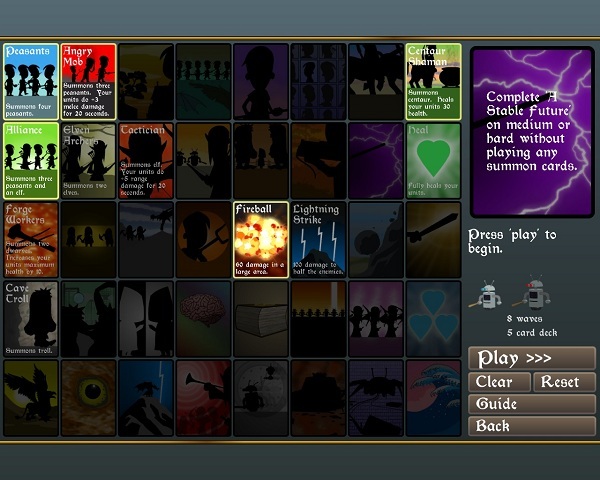 With 40 cards to unlock and each deck only consisting of a handful of cards there’s a lot of picking and choosing required and like every good card game there’s a wide range of offensive cards to strike against the incoming robot attacks, now you aren't fighting science with science in The Trouble with Robots, and developers Digital Chestnut have instead kitted out the cards with a strange variety of fantasy characters including Elves, Dwarves, and hick Peasants, even Cave Trolls, Griffin and Dragons, each have their own perks, summon a certain amount of creatures and quite generally kick robot ass.

Now if you have played any trading card games then you’ll know that you cannot simply fight your way out of a battle, well, you can, but you’ll encounter a lot of losses, so there is an ample supply of support cards to heal your units, slow down your enemies and support your other cards, the more interesting of which are unlocked further into the game, allowing for more card pickups, stat boosting on your friendlies and even enhancing the amount of characters that are summoned with each card played.

Then there’s the all-out-destruction-nuclear-bombs; the area of effect cards, perfect for instant, en masse destruction, after all, nothing is better than striking down your robot chums with heavy bolts of lightning, fireballs and falling boulders. The mix of cards are brilliantly balanced, and figuring out which characters are complemented by other cards is one of the true joys of the game, granted there are a few sneaky exploits that can brandish you simply unstoppable but everyone likes to play the bigshot. 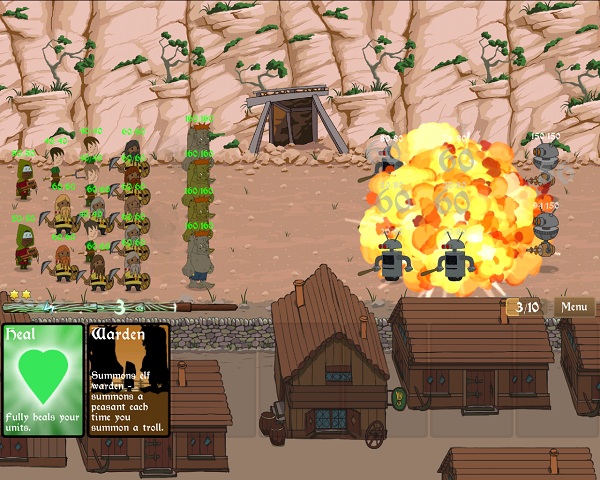 Now of course you aren’t simply given all 40 cards at once, in fact you only begin with 6 cards and are slowly drip fed others after victory against your oppressors and gaining stars based on your proficiency across the eighteen story levels, some requiring a lot of investment which makes it all the more sad that there are no true endless stages in the game.

You might tell from the screenshots that The Trouble with Robots is very much a no frills experience, and the guys at Digital Chestnut know that fun gameplay should always be the number one priority for a game, and like many of us are sick of 100% style/0% substance games, it works well for them; and the charming cartoony design amplifies the playful ambiance of the game, not to mention it's pretty easy on the eyes!

The Trouble with Robots truly excels through its simplicity, thanks to its modest interface, the game can literally be picked up and learnt in minutes, it may not look like the latest blockbuster, but all of the fun is had in letting go, and simply enjoying the frantic battles in this card based strategy. 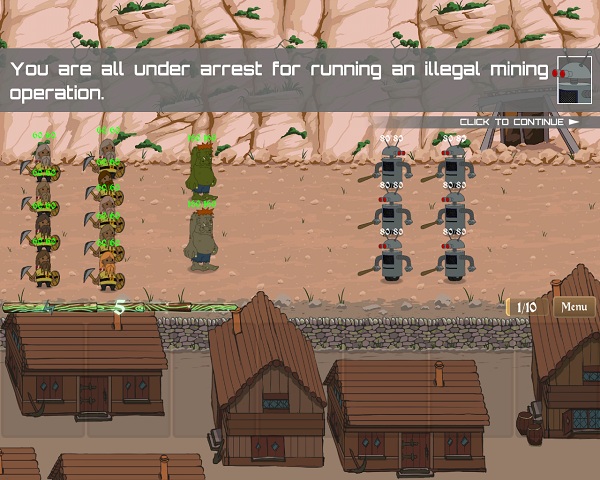 Whilst The Trouble with Robots is by no means a difficult game and unfortunately a full playthrough will net you only a few hours of gameplay, its replayability is strengthed with three difficulty modes, more cards to unlock, and best of all the Limited deck that allows you to play through the levels restricted on the choice of your cards.

The Trouble With Robots is a godsend, very little games of both its simplicity and fun factor rarely see the light of day on PC, and it is surprising that it has not seen a casual mobile release where games of its kind frolick about like lambs. If you do enjoy deck building, whilst this is not the most complex game, its unique style and pairing of tower defense with the age old love of cards makes it a must play in my eyes.

The Trouble with Robots is available now from Digital Chestnut’s website for £9.99, if you don’t believe its as fun and carefree as we’re telling you there is a free demo containing the first six levels, so go get it!

Incidentally in a few weeks time you can expect to see the Trouble with Robots get even bigger with the new free expansion, we'll be sure to keep you posted on its release!