Some many remember the ingenious Echochrome released a few years back, its puzzles evoked familiarity with the mind boggling paradox illusions of M.C.Escher and it proposed intricate puzzles with the rotation of platforms and shapes in a very minimalist space. The Bridge takes it that step further, with ornate luxuriously drawn arenas that make up each stage of the modest game, if Echochrome was inspired by the paradox illusion; The Bridge is a complete worship of M.C. Escher's work and indeed art style.

The game starts you off with simple stages wrought with twisting optical illusions that allow you to weave inside and outside of buildings whilst you are introduced to the most simple puzzle aspect; 360 rotation of the level. At any point in time you can change the rotation of the level, however you must bear in mind that your small curious character does bend to the laws of gravity so you cannot simply walk on ceilings and up walls; to simplify, the game tasks you with rotating the level to give your character access to certain areas, it's as simple as that, and really that is all you have to worry about! 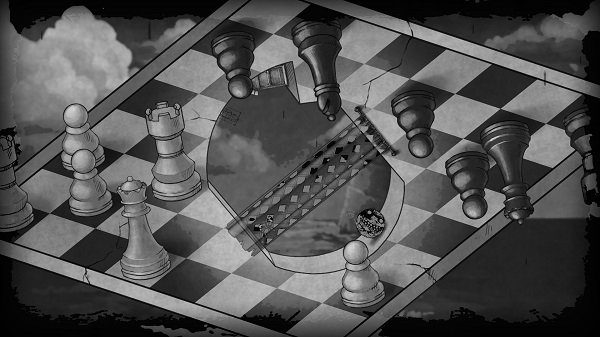 Each level is fairly straightforward in a linear sense, you start off in a specific location, and at another point in the level is the exit door, you must get your character to the door, and bypass any obstacles in your way, these may include the particularly nasty ball called the Menace that will follow gravity and the rotation of the level, the frustrating Vortex that will suck you or any other object into it and never let go, or your obstacle may just be that there is a key that you must unlock the door with. To get there you must traverse through impossible architectures whilst paying heed to these obstacles, least you meet your untimely death.

If you do happen to slip up, which you will, The Bridge has a rewind mechanic to backtrack on your progress, effectively bringing you back to life, and in some cases very handily undoing any mistaken rotation on your current stage. Your death is not the only cause for a fail state however, and if an obstacle in the stage is imperative to the completion of the level, such as a key for the exit, or a Menace required to compress a button, the stage will abruptly stop you from playing if any of them leave the arena. 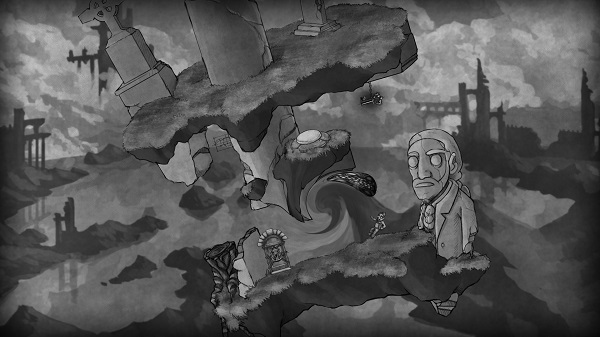 It would be an understatement to say that The Bridge is devilishly challenging, and you may scoff at the notion if you have observed the first three chapters; each is relatively straightforward, you whilst may get caught out here and there by a slip on your part, you'll soon seen the errors of your ways, it's all part of the learning curve so that you may fully understand each mechanic that gets added to the game. Whilst some like the Vortex and the Menace are mere obstacles, others like the Inversion will be your first truly puzzling element; it poses as a strange doorway of sorts that allows you to swap from black to white, and in the black space all white objects move in the opposite way and vice versa in the white space.

For the last chapter you are introduced to The Veil, and some of the most fiendishly hard levels in the game, The Veil is an interesting trick that stops your character from bending to the will of gravity, and allows you to control another object in the world for as long as you wish, the veil is an important tool in the last couple of levels, and if you don't fully understand its purpose you'll end up scratching your head in perplexity as you attempt to use it. This is where one small issue does crop up in The Bridge; we live in a society of hand holding, and rather than inform you of a particular object's use and purpose, The Bridge's directive is for the player to figure out their purpose through trial and error, some players may find this frustratingly obtuse, so it is imperative that you come to the bridge with an open mind, there are no tutorials here except for the laws on rotation. 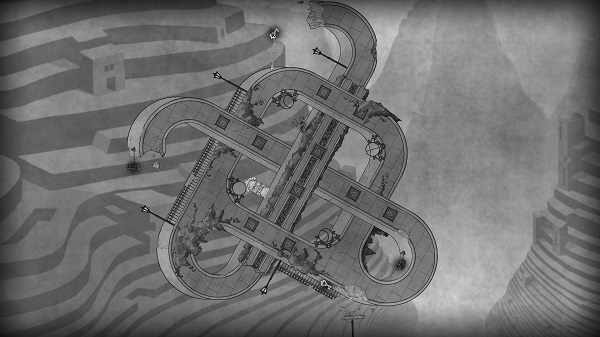 Now you are already aware that the game looks like a direct homage to M. C. Escher's works, however on another level it is a brilliant example of why hand drawn art styles are second to none, each stage is beautifully drawn and could easily exist as a black-and-white lithograph, the detailing in each stage and chapter is exquisite, in fact not only does The Bridge play like a dream, but it looks like one too!

The Story much like that of Braid is very exploratory and it follows the protagonists journey through his house into these imaginative stages, it doesn't necessarily add or take away from the game, however if you do wish to delve into it you will find some suitably dark undertones that may appeal, however much like the mechanics of the game you will need to get your head around it all.

Depending on your ability to accept the illusions and practices of The Bridge a play through of the game can take anything from 2-6 hours, however regardless of your level of competence, you can't stop the immense satisfaction that comes with completing a stage, particularly when you're challenged with the likes of the last few levels! It's truly the sign of a great puzzle game. 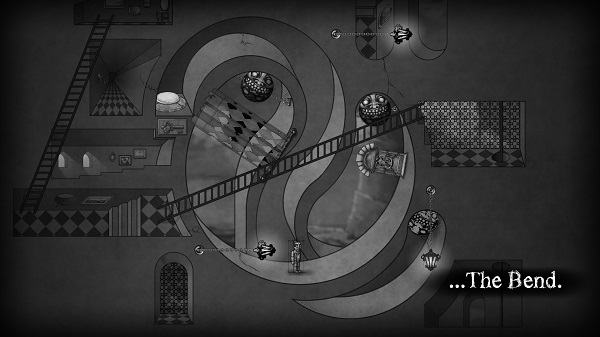 The Bridge is not only a beautiful work of art, but its puzzling challenges are nigh on perfection, it may not take the more astute very long to complete, but you'll have not have felt such satisfaction with your own deductive process for a long time!

The Bridge is available now on Steam and Gamersgate for the SRP of £11.99, and believe it or not, the game was made by two individuals for a University project, so if you are a bit of a pioneer of indie developers then you can purchase it directly off of their official website for £14.99.