Blitz Games and THQ have teamed up once again to bring The Biggest Loser Ultimate Workout over to the Xbox 360 and turn it into a Kinect title. Allowing for a more well-rounded experience that of course requires you to actually exercise instead of fake it when you don’t feel like moving about anymore.

The Biggest Loser is a TV show that is broadcast in a variety of countries and its main focus is that you watch a show about overweight contestants attempting to lose weight so they can win a cash prize. The money available to win obviously differs dependant on the country, but it provides a good incentive to lose some weight. So each contestant has to lose the highest percentage of weight (or most overall dependant on which country's show it is) in order to become the Biggest Loser. The game takes the exercising, challenges and everything else from the show, except for the winning a big pile of money of course.

As someone unfamiliar with the TV show I was unsure of what to expect from the game, other than bright colours and the two hosts as shown from images and the box art. Like the other Kinect fitness games out there upon starting the game you are introduced to it and asked to create a profile for yourself, which asks you to enter a few details and it’ll give your body a scan as well. You are then thrown into the main portion of the game, fulfilling your required duties to lose some of that gamer weight.

The exercise routines that the game creates all seem to do a great job of keeping your heart rate up and out of breath if exercise isn’t something you do regularly. Near the end of your routine things are then slowed down with muscle stretches so you can warm down, presenting to you a great workout which will always be slightly different. Throughout the workouts you are given points to have a drink of water as well as prompts throughout the game asking if you’re doing ok with the exercise. This uses voice recognition, however you will have to make sure to speak clearly while jogging or doing star jumps, otherwise it may not hear you properly. 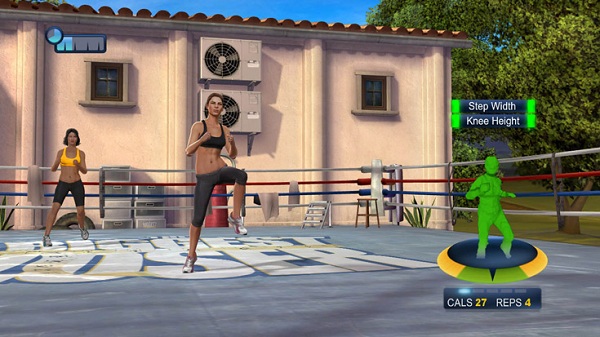 After exercising for a week you then are given a weigh in (you will need some proper scales or a Wii Balance board to perform this) after this weigh in you are given the choice to change your fitness routine if you’re finding it too hard or too easy. At this point I decided to up the exercise I was doing to make it more challenging. However be careful you don’t hover over the options too long as I found out I’d upped my exercise time drastically higher than I wanted, which meant I have to do harder workouts for another week before I can change it again.

As well as the main workouts there are also challenges you can do on the side which are similar in style to that of what the TV comprises of, which require a lot of movement for a short amount of time, but in the end if you win it will increase your total Fit Score as well as give you a short workout. They work well as an extra bit of exercise for the day in addition to your routine. The challenges allow you to do a variety of techniques multiple times, such as Jump Rope, Marching or even Kicking all dependant on which challenge you attempt to partake in. Of course on the screen the contestants will be doing something else, but as you can’t pretend to cycle a bike in your living room, it gives you some good substitutes instead. For those with friends wanting to lose weight there is an online multiplayer function that allows you to all do exercises at the same time so you can see if you can do a better job than your friends at the workout. 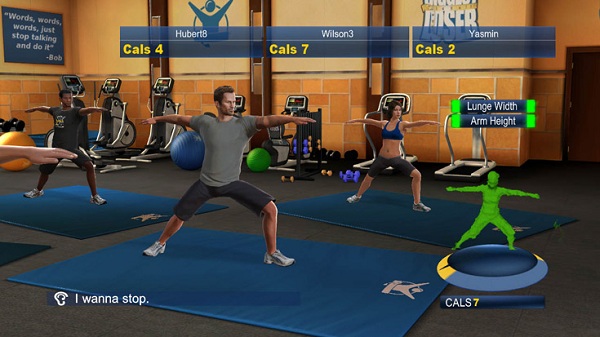 A nice feature in the game, albeit very cheesy which is aimed at a more serious audience (there is no embarrassing photo taking involved in the game) is that the game gives you the ability to record a short video diary, which for someone actively logging their weight loss is a great idea. This has been let down slightly though with a very cheesy added camera overlay and theme to the whole video, but it’s a great idea that all fitness games should include.

The game also features lifestyle hints and tips to help you get to your desired weight, these are quite a nice added feature if you have the patience for the UI, and includes a load of recipes for low-calorie meals. You can also read some tips and advice for aiding towards your loss of weight as well as taking the Know Your Number score to find out your risk of diabetes, stroke or heart disease.

My only main issue I do have with Biggest Loser is the UI for the game, of course with new technology it's hard to get it nailed first time, but it can become frustrating at times when navigating through all the menus of the game. To select an item you will need to hover over an option or arrow to progress to the next part of the UI or game, your choice is selected after hovering over the item until a circle is complete. A lot of games are doing this but it seems a bit of a wrong choice for this game when you just want to jump straight into the fitness routines; it also makes it slightly more annoying that you can't use the controller to navigate on the menus like most other Kinect titles.

The Biggest Loser may have its weak points in the UI but ignoring those it feels like an almost close to perfection game that helps aid the loss of weight. I've really enjoyed playing it for the time I have and intend to stick to the 12 week program it presented me. If you want a fitness game for Kinect I highly recommend The Biggest Loser Ultimate Workout, especially if you're determined to get some exercise along with achievements while playing a game.

The Biggest Loser Ultimate Workout can be found only on Xbox 360 for Kinect, and has a retail price of £39.99 and is out on the 26th of November and requires Kinect for the whole game. The Biggest Loser can also be found on Nintendo Wii as well for those without an Xbox 360 or Kinect however the experience isn’t the same.