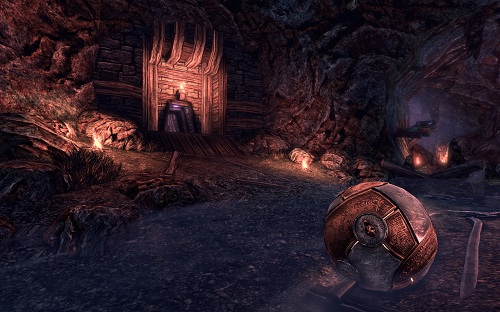 The Ball chooses the very interesting setting of Mexico, where as an archaeologist you become trapped in a large volcano, with nowhere to go but deeper inside, your exploration reveals that you are in more than just a volcano. From the very discovery of the mysterious Ball, you are sucked into a rich world of unspeakable terror and ingenious puzzle design, all with a dark and brooding soundtrack that perfectly complements this atmospheric title.

The Ball is a recent contest finalist from the 'Make something Unreal' contest held yearly, and the guys at Teotl Studios really did make something Unreal. Rather than outright copy Portal in the craze of first person puzzle games, The Ball has taken cues from first-person-shooters foremost, with a dash of puzzling on the side, expect the usual grit and brutal gore of a decent Unreal game, and whilst it does not have the endearing writing and wit of Portal, The Ball's execution is its strong point, and it succeeds in doing everything that you would expect with the Unreal stamp on it.

The environments of The Ball are all very natural, and range from lava-spewing ruined environments, to beautiful waterfall landscapes, while the environments are not anything new that we haven't seen before, magically, everything in The Ball seems to fit within the aesthetic of the game. Whether it's the skull-adorned gun that you use to control your ball, or the oven chambers that turn your ball into a fiery sphere of hellfire there is nothing that seems out of place. This is enforced by the consistent use of massive looming mechanisms full of gears and cogs, it is the most impressive point of The Ball, and is used throughout the game to fantastic effect. Whether it is a 20ft lift or a simple man sized door, everything is opened or closed or moved with the majestic clunking of industrialised gears in motion, yet made out of simple materials such as wood, stone or iron. 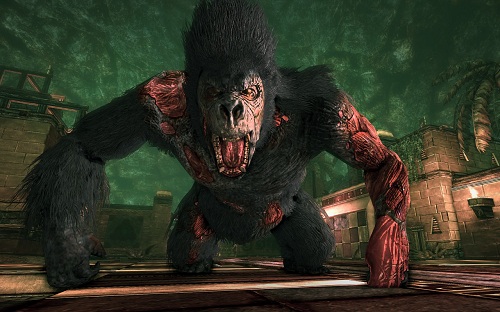 The Ball is fairly straightforward as games go, and your ball is controlled in a similar fashion to Half-Life 2's gravity gun, with one mouse click you will attract the ball to you, and with the other you will repel the ball. These simple controls are used throughout the game in various creative ways in order to overcome your obstacles and complete puzzles. Throughout the 8 different levels you will find the game steadily increases in difficulty, as you encounter mummies, bugs, fire-throwing turtles and the fearless Tlaloc; impenetrable to the hit of your ball, but more susceptible to the hazards of nature.

As well as your standard mysterious Mayan ball you will also encounter numerous special properties for your sphere of doom to encompass. You will find yourself using your ball as an aid to your movement with the Gravity Ball, to kill enemies when you are vulnerable without the ball in front of you with the Nail Ball, or to kill specific enemies, like the Mine, Electric and Oil Balls.

As well as the different properties your ball can take on you will also be able to power a couple of vehicles found throughout the volcano with it. Best of all is the Ball Chariot a huge bulking transportation that will come in hand for traversing expanses of lava and for cutting out the time between travelling to certain areas; it is also possibly the most unnecessarily big thing in the game, yet totally impressive whilst you are driving it.

The Ball begins very simply, there are a few rather easy puzzles here and there that involve either the placement of the ball or yourself to open doors, however, you know already from the BBFC 18 rating the game has that it is going to get nasty fast. You are not prepared well enough as The Ball makes the transition between humble puzzle solving and mindless slaughter in a fight for survival.

However the combat in The Ball ends up feeling quite unplanned for, you’ve really got one of two options; you can attempt to shoot your ball at your enemies, and find yourself out in the open, or you can attack them how I preferred; swinging the ball from side-to-side in a manic plea that it kills anything in your path.

The only other issue of the game is that it breaks the No. 1 rule of first-person-games; Do not include tedious jumping sections. Throughout the 8 different levels, and four different environments you will find yourself at various points during a puzzle that will ask you to make numerous leaps across flowing lava, spikes or other hazards. Whilst The Ball is not asking for precision jumping, the act of asking a person playing in the first person to make numerous jumps that you would expect in a platformer is not fun, and unfortunately never will be. 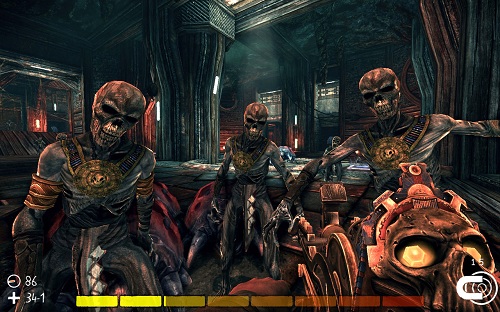 Alongside the Campaign mode The Ball also includes a Survival Mode that pits you against countless enemies in the survival for your life, this actually works really well considering how fiddly the combat is, and is quite challenging when you have a go at the slightly more hardcore maps like Teniza or Tepiton that pit you against environmental hazards as well as waves of enemies. The maps are made specifically for the Survival Modes and are great to relieve your stress after getting stuck against the giant worms in the campaign. There is also nothing better than the satisfying crunch of bones when you drag your ball over the bloody-thirsty enemies that will encroach upon you.

The only real problems with The Ball is at times it does not seem to be able to distinguish whether it wishes to be a first person ‘shooter’ or a puzzle game, whilst there is a lack of health packs that deters the general feeling of a first person shooter, there is a large amount of enemies present in the game. This makes it rather difficult to kill them tactically when you know that the last save point was a while ago and that you’ve almost finished the puzzle you are on. Whilst there are health packs as such in the Survival mode, all that is present to pick up in the Campaign are secrets that will divulge tit-bits of information on the people that lived under ‘them’, so it does feel strange that especially in boss battles or really tough sections that they did not include the health packs from Survival.

The Ball was an extremely respectful mod for the Unreal 3 engine, and is now a great little game that is well worth your money, the 8-hour campaign is clever but not so annoyingly difficult that you will turn the game off in disgust. With the simple help system, gritty atmosphere and straightforward controls any gamer can suck themselves into the Mexican Volcano with pure ease; just watch out for the mummies, they like the taste of archaeologist.

The Ball is available now via Steam or at retail for the SRP of £19.99, be aware however that the retail version comes with a soundtrack and signed postcard, and the music in the Ball is top-notch and it is worth searching out for in your local game shop, you’ll regret it once you buy the game off steam and hear it!