Our hero of heroes DeathSpank returns in the fight for justice, orphan-kind, and bacon in his newest meaty outing; The Baconing. The Baconing sparks a change in the series has it pull it to the future, putting a sci-fi twist on the series, making allusions to well known films such as Tron, Star Trek, 2001: A Space Odyssey and so many more, taking it away from the old fantastical settings that were laid before us in DeathSpank, and its successor Thongs of Virtue.

Looking at the game it doesn’t look as though much has changed, however deep inside it’s inner workings a lot of risky transformations have taken place since Thongs of Virtue. Granted, fans of the series will find a lot of familiarity with some of the most successful points of the previous games returning. But will we have as much fun with DeathSpank as we have had in the past? 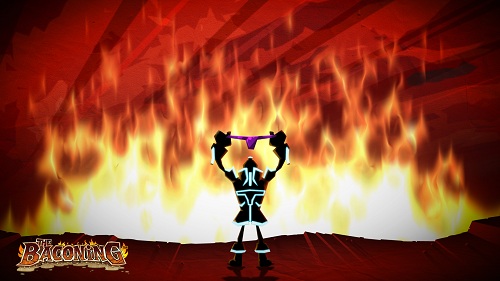 After collecting the five Thongs of Virtue in the previous game, in wearing all five at once DeathSpank has created a copy of himself; Antispank. In order to destroy him you will need to journey to exotic lands to destroy each thong individually in the fabled Bacon Fires.

Destroying the Thongs will take you across many different areas; The Forbidden Zone, The Forest of Tomorrow, Rainbow End Casino, Barnacle Lake, and the Valhalla Knights Retirement Home, however unlike previous games, each area is specifically set up for a thong, with no real in-between settings, practically removing the partial non-linearity of the game, and making it seem a lot shorter, plus with only five areas to explore the map is a lot smaller as well, with far less of a world to explore.

Whilst a lot of changes have transformed the game, its enthralling humour is still present, so get ready to take part in Ultimate Opera Championship, become the God of the Orphans, play some Simon Says, and even a bit of Insult Sword Fighting for good measure. If there’s one thing that keeps me going in DeathSpank it’s his no-nonsense, blunt approach to absolutely everything, that and it’s unique art design that melds attractive 3D character models with beautifully cartoony 2D environments, thankfully the two still remain, and both the humour and art style remain the saving grace of his third outing. 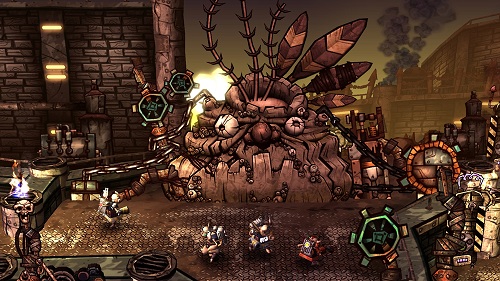 The largest change that has taken place in The Baconing is to the combat system, which appears to have been reworked slightly, and has far more emphasis placed on it in comparison to the previous games. This has also been stressed with the addition of difficulty levels, where even on the easiest of settings you’ll find yourself in a lot of hot water. Whereas in previous games you could leisurely enjoy the game at a snail’s pace, encountering a little difficulty every now and again, The Baconing ramps up the effort required to kill a group of your standard enemies to the point where you will find yourself respawning at an Outhouse every five minutes.

To contend with this spike in difficulty, DeathSpank has a few new abilities up his sleeve; including the capability to charge up ranged weapons, bash enemies with your shield for a brief stun, and the extremely effective shield reflection that allows you to bounce enemy projectiles back at them. These are all fantastic abilities that would have worked extremely well from the start of the series, and do add an element of skill to an otherwise mindless game, however even with full comprehension of them you’ll still have a lot of trouble working through the game.

On top of these standard abilities, you’ve also a number of new weapon combinations for particularly devastating effects, a host of new armour sets, and the new Weapons of Justice that dish out overwhelming damage to your foes when your Justice Meter is full. 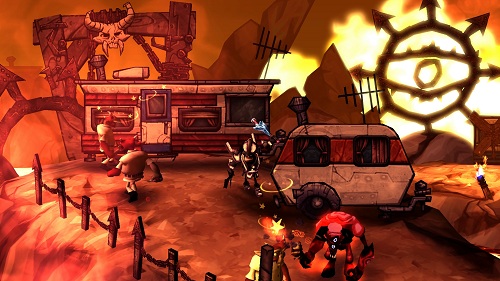 You’ll find a lot of familiar faces in The Baconing from both DeathSpank and Thongs of Virtue, so you’ll feel right at home with the memorable and not-so-memorable characters, also making a return is the familiar music that appears to be very much the same with a slightly different arrangement, dissimilarly there are only a few puzzle elements present, and you’ll find less adventure game style requirements as they are replaced with more general hack’n’slashing.

Questing is still at the forefront of the game, and whilst thankfully you won't need to kill any Greem Queens, gather research on Thongoliths or help out the occasional Spelunker, the Questing feels rather hollow in DeathSpank’s newest adventure as none of them really request you to venture forth to the corners of the earth for an obscure item or enemy. Instead, each quest is pretty much localised to the particular section of the game that you are currently playing, making your world feel far more restricted as once an area is finished you really have no reason to ever venture back to it.

One of the main reasons that we love the DeathSpank series is it’s openness towards embracing local co-operative play, and as usual, The Baconing has added a new character to the roster of co-operative players that already includes Sparkles the Wizard, Steve the Ninja and Tankko the Spider-man, our newest member to the flock is Bob the anthropomorphic Shark from Marketing. 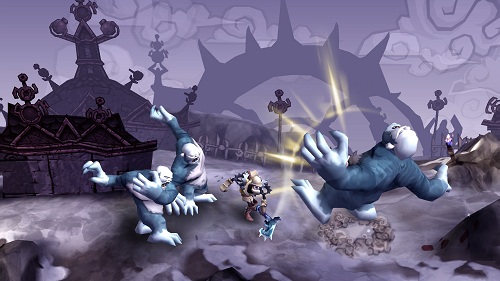 As usual, Bob has a host of unique attacks; however it is his support attack that is the most interesting; allowing your partner to wander around chewing on enemy corpses to aid DeathSpank. This is accompanied by laser eyes, the ability to swim underground, and a nice small swordfish dagger. Whilst limited in attacks the co-operative play is one of the best parts of the DeathSpank games, and Bob makes a splendid addition to the gang.

The Baconing is a welcome return to the self-obsessed world of DeathSpank, however with the combat-centred turn that the game has taken, it has made an enjoyable and hilarious game a rather hilarious chore, here’s hoping his adventures continue with a little less violence.

The Baconing is available now for Xbox Live Arcade, PSN and PC/Mac for 1200 Points, £9.99 and £9.99 respectively. As the third game in the DeathSpank series, if you liked the first two then you’re going to love The Baconing, however if you’ve yet to play the games, The Baconing makes a good, if not difficult start.