Syndicate of course isn't the first game you'd think of when trying to name an FPS, other games will usually come to mind at first, however if you were trying to think of a four person squad based game that involves agents carrying out their duties. You may then consider Syndicate, most likely the original Bullfrog title though, but the new Syndicate has a slight similarity with the original.

You may or may not be looking forward to Starbreeze's reimagining of Syndicate, but that depends on what side of the fence you're sitting on. The avid fan who wants a Syndicate game that is true to the original series. Or the person looking for a new interesting FPS that may have the potential to be a brilliant game.

I'm a fan of the original and Wars, but I'm also a big fan of Starbreeze and know they're great at what they do; creating an atmospheric game with interesting game play, a great story plus usually a fair bit of violence. With their last game being the truly stunning Darkness, they've been sitting on this game for a while trying to create the best possible experience and I hope the single play is just as enjoyable as the multiplayer.

Late last week I had a chance to check out an early version of the 4-player co-op demo prior to its official release on Xbox Live and Playstation Network. And I must say after multiple playthroughs on the same map over and over again was fantastic, I could have played it for many hours more and still enjoyed it.

With only a Western European map to play through; that consisted of four base levels with checkpoints which were all contained within a single mission. If played with three focused people it makes it lots of fun and is easily to complete on hard as long as there's lots of teamwork and focused healing taking place. By default a game will be on normal which fits you with a worthy challenge that can be completed with less focused people or finished simply with some great friends. You also have the choice to pop it on hard if you want a challenge and to test your teamwork skills. 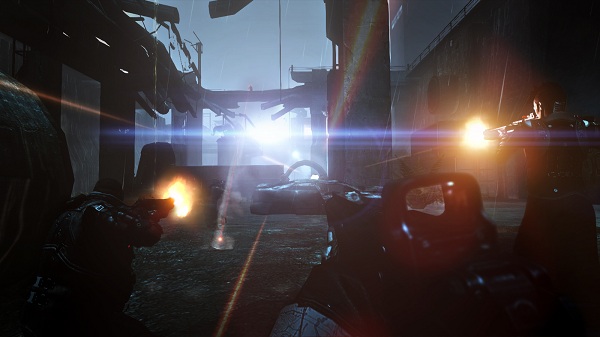 If I were to name on immediate flaw with Syndicate it would be the character design of the co-op characters, but that is of my own personal opinion, they just feel a little stereotypical. Of course they fit the "cyberpunk" scene, but they just feel slightly out of place, and almost juvenile in such a mature game, at least when comparing them to the characters we've seen from the single player. After a few games the characters do grow on you but I wouldn't let it put you off the game, they gave me mixed feelings for the co-op, however after playing it I can say I was totally wrong and I'm glad I gave it a chance.

When in the lobby you can choose one of three classes, whether there are more classes in the full game we're unsure but for now you can go with Offense, Defence or Support, each class has a handgun on the default loadout, and then you get a shotgun on Offense, assault rifle on Defence and a sniper rifle on support as well as a unique dart ability for each class. Similar to the original you can always change your weapons about should you not like the default loadout. My favourite weapons that were available on the map had to be the shotgun that Offense had by default and the Tar-39 Rifle which is great for taking out the general fodder.

One of the best aspects of the co-op is the use of the Dart6 chip, which doesn't only allow you to breach certain items as seen in the single player, but it is also your method of healing. A quick hold of the left bumper while facing a teammate can give them full health or even a "reboot" back to life if they've been incapacitated. This was one of the strongest team building aspects of the game and the healing can even be done from a fairly large distance, or within a certain radius to reboot. As well as helping your teammates your dart chip can breach doors, turrets, create cover or even make tougher foes vulnerable.

The co-op also features a ranking xp based system with lots of possible upgrades to keep people playing. Throughout a map you're scored in a variety of methods related to kills; be it a kill assist, headshot, standard kill or from taking out someone who's slightly more important like a seargant. However the game also features friendly fire so you can also be penalised for killing a member of your team, so be careful. You can also complete challenges during play of which there are at least 125, collect blue prints or design documentation giving you lots of little things to keep you busy while you play with your friends, while also keeping true to the original by allowing research into weapons.

If you'd like to check out some footage from the map you can play, check out the video below, otherwise just go download it and have a play for yourself. Although make sure to grab some friends as playing on your own in a private match is very difficult as you can't heal yourself.


The demo went live yesterday on Xbox Live and is available to download today off the Playstation Network, it's best if played with three friends or you can always play with randoms with the quick game matchmaking. I thoroughly enjoyed playing Syndicate and I only hope that the single player is as much fun as the four player co-op.

Syndicate is due for release on Xbox 360, Playstation 3 and Windows on 24th February and we can't wait to see what they've done with the single player, fingers crossed Starbreeze have created another great game.