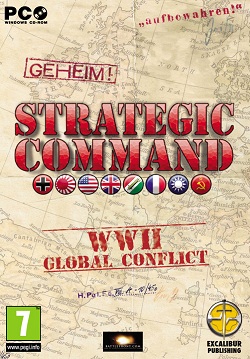 The Strategic Command series has stuck to WWII since its debut in 2002 with Strategic Command: European Theatre, however Global Conflict has gone beyond its predecessors and rather than focus on a smaller country scale, Global Conflict has you command practically a nation together against the fight of good or evil, depending on whether you wish to fight for the Axis or the Allies.

Like a lot of games, WWII Global Conflict throws the player in at the deep end from the very beginning, and it would have been nice for an in-game tutorial to explain the basics, however a tutorial is located on the digital manual, not to mention that each and every scripted event possible in the game is detailed in full for you to mull over, so don't ignore it, have a good read beforehand for your own good.

The graphics to Strategic Command WWII Global Conflict are extremely simple, possibly to the point of Sim City 2000, however as most strategy fans will know, it’s not flashy graphics that you’re looking for, as simple as they may be, they are extremely effective, and deliver will no frills attached. 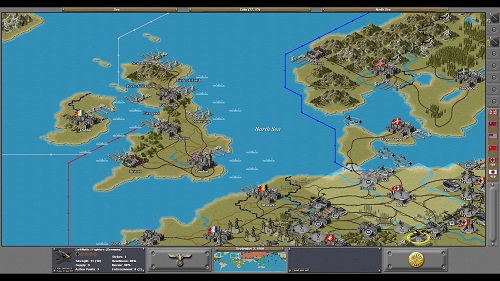 The game contains 4 main campaigns that range throughout the timeline of WWII, each with their own specific victory conditions, including over 200 scripted events that may take place in a game if you fulfil their requirements, as well as over 50 different decision events that guarantee a unique experience every time the game is played, such as encouraging India to join the fight against the Axis early.

The game runs on MPP (Military Production Points) that you collect at the end of each turn, based on your number of cities, mines and oil resources, however not all of your countries will collect these and it's only the main powers that count. MPP's are integral to the game and act as a currency of sorts, and will be used against new units bought, researching new technologies, a true asset for those intent on world domination.

The game also comes with a campaign editor that allows players to construct maps up to (512x256) tiles large, making for a huge playing field to get caught up in, you also get the option to edit the campaigns already present, as well as changing the amount of MPP that research, diplomacy and units cost, so if you find it a little difficult to scratch up MPP points, why not make the game a lot simpler. 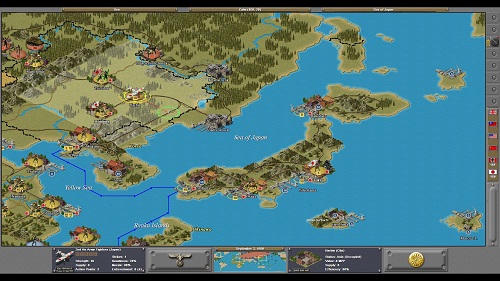 The only real gripe to have with the game is its lack of a skip turn button. When you consider that you are controlling half of the world in battle, when your opponent is taking their turn, they have just as many units as you do, and it’s no short affair. Unfortunately like most turn-based games WWII Global Conflict will eat through your time, with just-one-more-turn addictiveness you’ll find yourself engrossed on WWII Global Conflict for hours on end.

In terms of online play, Strategic Command supports a host of options that most turn-based fans will be used to; in particular Strategic Command WWII Global Conflict supports Play-by-email, hotseat gaming as well as network play, that all have their advantages, just make sure that your opponent remembers to end their turn!

Strategic Command is a turn-based strategy that goes back to the basics, simple graphical and aural representation results in a clean cut but effective grand strategy. It may not be competing for innovation, but is at heart an extremely well rounded and respectable turn-based WWII title, which are frankly pretty thin on the ground.

Strategic Command: WWII Global Conflict is available now from all good retailers for an SRP of £24.99 exclusively for Windows.