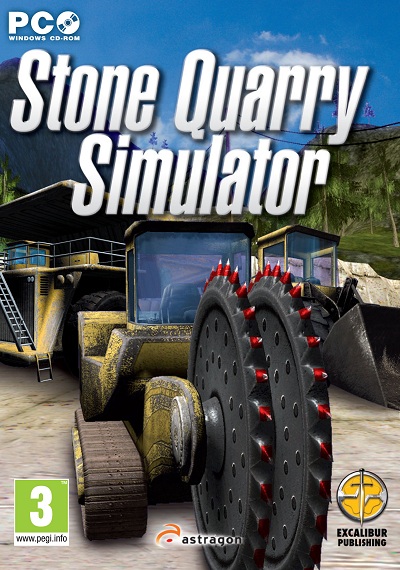 We’ve seen them all, from digging simulators, demolition simulators and construction simulators, if there’s one thing a vehicular sim fan loves, it appears to be moving dirt and stone around various locations. You’ll often visit stone masons, or occasionally perform a mission at a pit, however a whole game based around the operation of a quarry has never been done before, until now. Thanks to Excalibur Publishing and Contendo you can run a quarry and cross the goal of using a 4ft chainsaw off your list, because Stone Quarry Simulator has one!

As always the spotlight of Stone Quarry Simulator is the genre’s most exploited vehicle; the Wheel Loader, with both the standard shovel and chainsaw... yes you get to attach a chainsaw to a wheel loader, both it and your Shearer Loader will find the most use on your land. However if you aren’t old fashioned you could always use a pneumatic drill, combine it with some dynamite, and you’ve got a pile of stone ready for the taking in less time than it takes to use a Shearer, and it costs a fraction of the price!

Whilst the loaders are your tools with which to gain your precious stones, on the other side you’ve got your transportation methods, these include a monstrous dump truck, allowing you to haul tons of stone around your quarry, and the standard van with which to cart around any crates of dynamite and pneumatic drills that may be required at the apex of your quarry. 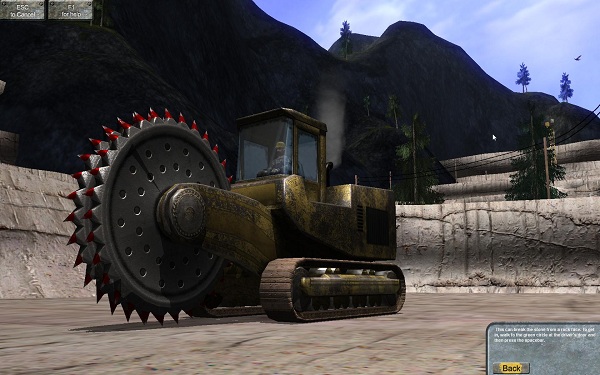 In order to get your product out to your customers in the exact way that they like it, you’ve got the Stone Crusher that allows you to crush up all of your hard-earned stone into varying sizes; grit, rail ballast, gravel and armour stone. The stone crusher is your most important piece of machinery, and whilst you will never have to front any money for it, its position at the foot of your quarry can get somewhat arduous when transporting materials back and forth.

For those of us that can’t pick up a game at the drop of a hat, Stone Quarry Simulator contains a series of tutorials that allow you to get up to speed with the various machinery, vehicles and tasks that you will undertake on the Quarry. The tutorials are simple and brisk which is fantastic if you just want to get down to the dirty work, however there were one or two issues where the incorrect keyboard commands were being used, and whilst it visited the general operation of the vehicles, performing certain tasks were not explained; being taught how to saw a perfect stone block is one thing, but not being told how to transport it back to the stone crusher is a whole half hour wasted fumbling around.

Your stone quarry is set in a picturesque location, look in one direction you’ve got beautifully lush mountains, and the other you’ve a glistening body of water, Contendo sure know how to set a scene, and even the dynamic weather is fantastic, whilst it makes no difference to your workload, its inclusion if only aesthetic, is well appreciated. 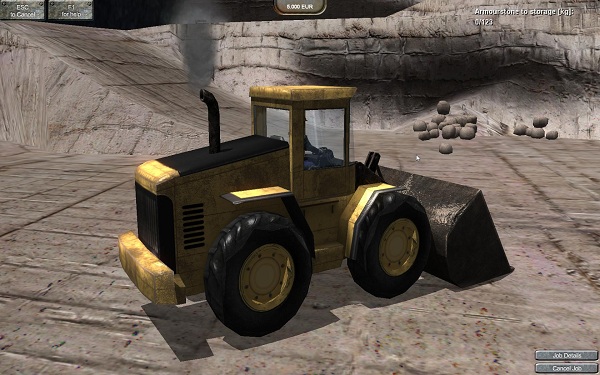 Career mode offers you a sandbox vision of quarrying, explosions and stone crushing across a selection of quarries, starting at the bottom of the ladder you’ll only be able to afford the marble quarry, each new pit simply unlocks the ability for more excavation at different locations, so with a whole pit at your fingertips, how are you going to make some money?

The career mode is fuelled by dynamic missions created from a range of tasks such as fulfilling customer orders, quarrying stone or sawing blocks, each job has a specific requirement and allotted pay, the world of quarrying is particularly slow, so thankfully you’re never given time specific tasks. Complete a job, and you’ll have the money automatically credited to your account, this is one simulator for the patient amongst you; as you have to fulfil a lot of orders if you wish to progress to the next quarry, it costs over £100k!

In your first quarry you begin with a shearer loader, wheel loader and standard shovel attachment, after having splashed out for the only quarry in your price range you’ll have a measly £5k to your name, and you won’t be able to afford any luxuries until you complete a few jobs, and with no dump truck in sight it’s back and forth to the stone crusher with your dainty wheel loader before you can start to haul stone around like you mean business.

In between jobs you can pretty much do what you want, it’s your quarry after all, you could slack off and sit around waiting for them to appear, or ensure that work in the quarry takes place around the clock, so that you are prepared with quarried stone for future missions. 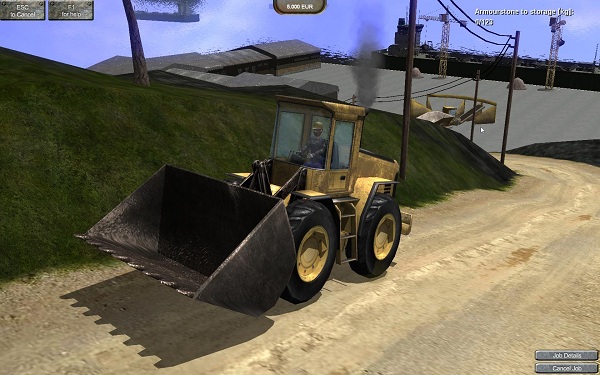 The career mode works surprisingly well in the quarry setting, and the games’ fun really depends on the enjoyment that the player can take from the repetitive task of quarrying stone, filling it into a dump truck, and transporting it to a stone crusher, this is pretty much the blood running through the veins of this simple but effective game. However if you’re like me, the simple act of being asked to perform a duty such as delivering 93kg of grit to your potential customer is enough to have me playing for hours.

Compared to other simulators on the market Stone Quarry is following the trends of career modes, and adding a bit more dynamism to the mix, however it does fall short from its competitors with its fairly humble graphics, avatar running cycle and physics engine, so don't expect your precious rocks to fall out of your loader as you bomb it down the valley to the stone crusher.

The act of digging and cultivating stone is one that is very familiar to simulator fans and the potential of owning and operating your own quarry puts an interesting spin on an otherwise tiring act, whilst it may not be for everyone, Stone Quarry Simulator is a fascinating addition to the simulation market, and does just what it says on the tin!

Stone Quarry Simulator is available now in all good stores and online retailers for the SRP of £24.99