The most highly anticipated MMORPG for the last five years; Star Wars: The Old Republic has had three editions confirmed for its release in the second half of 2011. The Star Wars: The Old Republic Collector’s Edition, Digital Deluxe Edition and Standard Edition are available for pre-order today at participating retailers, and digital versions available exclusively at Origin.

Players that pre-order from Origin will be given a redemption code that unlocks early access to the game, as well as an in-game colour stone to change your weapon effect; pre-order quantities are apparently limited, so if you want to play the game early, best get those pre-orders in now.

Bioware have also announced that starting this September, Star Wars: The Old Republic will open Beta Test Weekends which will be open to selected players worldwide, and give fans an opportunity to get a sneak peek of the epic stories, worlds, quests, battles and characters of The Old Republic.

The bog-standard edition of Star Wars: The Old Republic is what it says on the tin and can be yours for £44.99 with 30 days of game time, the base game is available at both retailers and online.

For those that don’t like a bit of corporeal goodness, but want some exclusive items then the Digital Deluxe Edition may be for you. For £59.99 you get the bog-standard game, 30 days of game time, and five virtual items including the Flare Gun, Training Droid, personal HoloDancer, HoloCam and the STAP vehicle.

Now those of you that like a little bit of Collectors pieces, there is also the Old Republic Collector’s Edition which includes everything that you get in the Deluxe Edition including a Darth Malgus Statue by Gentle Giant, the journal of Jedi Master Gnost Dural, the soundtrack of the game, a security key and map of the in-game Star Wars Galaxy. As well as all this, you will gain access to the Collector’s Store, an in-game store with in-game items exclusive for owners of the Collector’s Edition, all for £129.99. 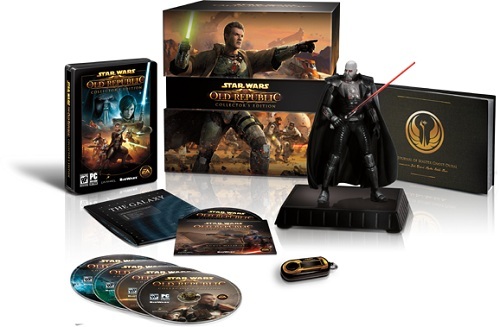 Out of the whole bunch, the Collector's Edition seems the best, but with a price of £129.99 only the most hardcore of Star Wars fans will be purchasing that edition, the standard edition also comes with a pretty hefty price tag, but with what is possibly going to be the best MMORPG of 2011, whose going to complain.