Often cited as the weakest action hero in the history of video gaming, Spelunker is a classic game that is impractically hard. Don’t be deceived though, the life of a Spelunker is perilous, alongside your own impracticality every corner is littered with dangers, it may be geysers, spiders, snakes and ghosts, even bat poop will destroy your meek spelunker.

Whilst some obstacles can be tackled; bats can be scared off by flares, and ghosts can be dissipated with your trusty fan, others rely on your patience. However too much patience will lead to a slow death; Spelunkers do not survive on danger alone, you’ll need to keep yourself full of energy that is littered throughout the stages. 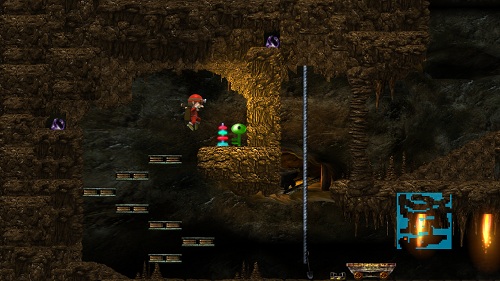 It is a real understatement to say that you need to play the tutorial before you get yourself into the game, Spelunker HD is super hard, forget anything you’ve ever played before, this game goes against anything that you ever learnt over the past 20 years of gaming. This is verified by the total death count of the top 10 players of the game totalling over 32,000.

Spelunker does surprisingly enough put you into the role of a Spelunker; for those unaware of the hobby, a Spelunker explores caves; the trick in Spelunker is to traverse the depths of the caves to set the highest score, by collecting treasure, exploring and escaping danger in 100 levels across 10 locations.

Surprisingly enough, it’s not the bats, or the snakes or even the enormous ghosts that you can encounter, the most dangerous part of the game, is involved in the rope climbing and ledge jumping that is inherent throughout, and switching to classic mode can even make those pixel perfect jumps even harder to achieve. For those with little skills, you can turn a rope assist on, to make rope jumping far easier.

Spelunker HD is super hard, but it’s addictive like Ghosts 'n' Goblins or Aladdin; no auto save, no continue points (unless you make them yourself), and if you run out of lives then you’re right back to the start of the level, unfortunately this may deter some gamers that are used to an easy spoon-fed game, if you don’t like a challenge then you’re barking up the wrong tree with Spelunker. 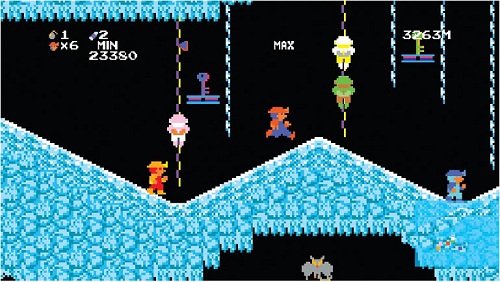 The game itself is a literal remake of a game originally released on the Nintendo Entertainment System, whilst little known in Europe, Spelunker has a legacy in Japan. For this very reason, Irem have remained faithful to the game, the enemies still consist of simple predators such as spiders and bats; very reminiscent of the innocent age of gaming, the same can be said for the Doom style coloured key system used to unlock doors throughout the caves.

If you play Spelunker you will definitely not be a stranger to dying, and there’s a fantastic condescending summary of the events that led to your death;

‘The Spelunker Charmoose did once venture into a cavern of untold mysteries. Alas, having committed one error after another. He perished at Stage 1 at a depth of 69m from tripped an insignificant height. And so the journey came to an end’

Alongside the Solo Excursions you will make, there are also two multiplayer modes available for play; Group Excursion and Group Competition. Thankfully both modes support 2-6 player online and 2-4 offline, allowing you to play split screen, or with some of your long-distance chums. 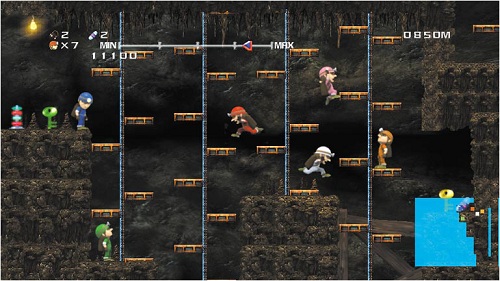 Group Excursion is a unique co-operative excursion with 10 stages; each stage is different from the solo excursions so you aren’t just playing the same game you’ve taken 40 hours to get through. Group play is a fantastic fun experience for a sit down with your friends; however it is a shame that you cannot enable unlimited lives for a more casual experience, especially because the lives are shared across players in this mode.

Group Competition is a race that takes place in a cave; this mode supports unlimited lives which makes a very enjoyable and laid-back experience. Howver, unlike Group Excursion, Competition mode only contains five different stages.

If you’ve a strong resolve then you’ll stomach Spelunker HD, however those that are prone to give up on games, you might want to look elsewhere. Other than the difficulty there is little else to spoil this gem of an ancient arcade adventure, the sound effects and music can get a little grating at times, but the platforming is grade A when you take a step away from what you know, and absorb the rules of Spelunking. 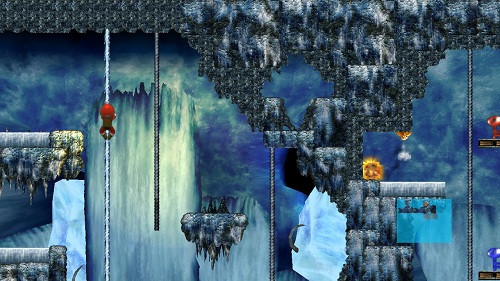 Spelunker HD is a delightfully challenging game, and its difficulty is a definite allure. If you played the original when you were a child, or have fond memories of dying over and over, this revamp of a much loathed game gives it a fantastic make-over.

Spelunker HD is available now on the PSN for £9.99, if you are looking for a challenge this weekend, and are bored of the same old, same old, then you will definitely find something new and surprising in Spelunker HD.