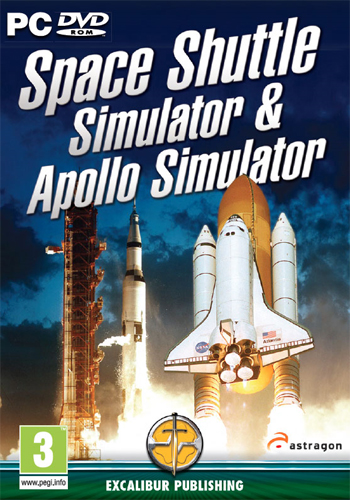 It's almost every little boy's dream to fly through space, to defy the laws of physics and go where no man has ever ventured before, unfortunately however most little boys will never live out that dream, from sheer lack skills or determination, you can choose, thanks to the wonderful world of video games however every person can live out their dreams - no matter how strange- on a daily basis. That's why we love Excalibur Publishing so much, in bringing the eccentricities of the obscure simulations anyone can be a bus driver, a pilot, a truck driver, even an astronaut.

Their newest title is Space Shuttle and Apollo Simulator, a double pack containing the two aforementioned titles. Apollo Simulator focuses on the famous Apollo 11 mission where man first landed on the moon, and allows you to experience the mission from take-off to re-entry on Earth, and allows you to pick whichever section of the mission you would like to play, or better yet you can experience the whole mission in one. There's even the addition of the Apollo 15 mission where they used the first Lunar Rover, and the option to have free exploration in a Lunar lander.

Unfortunately Apollo Simulator is particularly dated, and the game itself is actually Apollo Simulator 2006, which is unfortunate because if not for the lack of graphical power the game itself is put together very well; from the command center recordings used to the intuitive controls system it would look absolutely beautiful with some photorealistic shots of the earth or the moon.

Space Shuttle Simulator is a lot more presentable than it's fellow Apollo, and gives the player a lot more variety in their missions; although you will not find yourself walking all over the moon there are a multitude of different environments, and with a mission editor the longevity of Space Shuttle Simulator is slightly higher than that of Apollo, but missing the historical charm of the Apollo 11 landing. 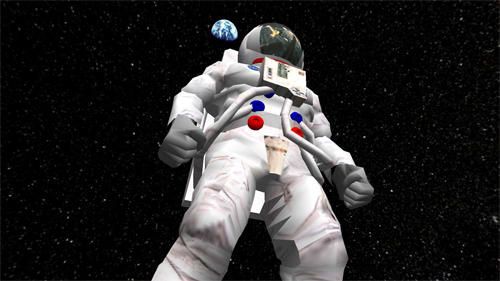 The only issue with doubling the two together in a pack is that the controls in both games are very different, which can make it very confusing when switching between the two, and makes mastering the controls that less satisfying when you realise that you have to do it all over again. The controls in Apollo simulator are much more simplistic to remember, however Space Shuttle Sim has possibly the most fiddly controls to remember in a simulator to date, but just like Tow Truck Simulator and particularly intricate simulation titles you will find that soon enough you have caught onto the functions that you will more regularly use.

There is of course an explanation of each process in the manual, however there is so much it will take a while - and a few failed shuttles- until it all sinks in, however once you've got the ball rolling you'll feel as intelligent as the most intelligent person on the planet, and the satisfaction of a successful moon landing or docking procedure is exquisite. 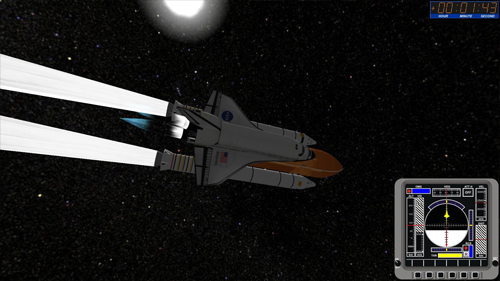 If you are very interested in Space then the pack will predictably be right up your avenue, however it's about as technical as simulators come and more so, for those unaware of the exact sequence that a shuttle goes through, or the docking procedure that a ship must take, you may not feel very welcome, and the downfall of the game is that without an actual tutorial players wishing to find out about the majesty of space travel may feel a little alienated. The interior of the shuttle's look about as complicated as the real deal, and they don't just let anyone fly into space for a reason!

All the little problems such as the controls and general graphics can be forgiven, as at heart the pair are a couple of true simulators, and if you do have a joystick, make sure you use it for the ultimate experience of flying through space.

Space Shuttle Simulator and Apollo Simulator is available now at all good retailers for the SRP of £24.99.