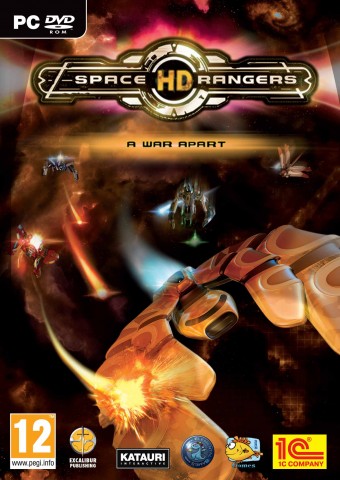 As a gamer, there's a very special moment in your life when you go into your local, pick up a new game not thinking much of it, before finding out that for some reason this game has been missing from your life, and you can't quite comprehend why you had never heard of it, or played it before, get ready to say hello to that revelation, it's called Space Rangers HD!

Space Rangers is unfortunately somewhat of an unknown series in the UK, the game and indeed series that it belongs to is critically acclaimed and extremely popular in its home country; Russia, as well as Finland and other areas of Eastern Europe, but due to a lack of marketing Space Rangers has never really seen the light of day in the UK, until now. 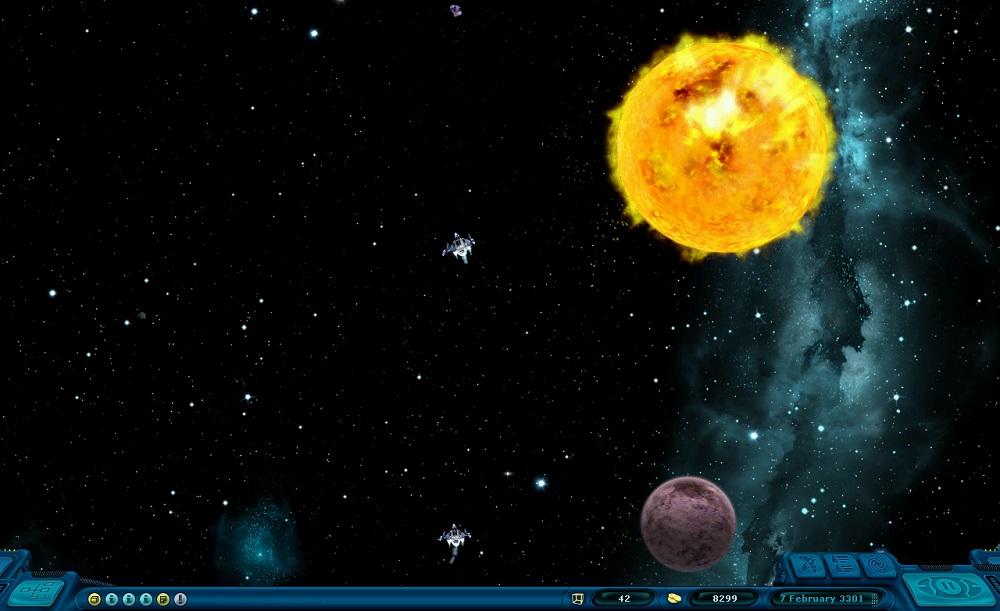 At first glance Space Rangers HD doesn't sound particularly interesting, and if you took a look at the box art, you'd probably think it doesn't look very interesting either, however the game you'll find inside manages to cover so many genres, and actually does it so well you'll be surprised that a game like it exists, and has done for over 10 years!

Because of this it may not be the most beautiful game out there, and with titles like Elite Dangerous and Star Citizen on the horizon some gamers may wish to look elsewhere for their space faring adventures, however if you look beyond the somewhat dated visuals like any great game you'll soon find yourself engrossed in a massive universe and swamped with things to do.

So what actually makes Space Rangers HD different from the rest of the space exploration games out there is in the different modes of play, Space Rangers HD is not simply a space faring game, it's an Adventure-RPG-TBS-Simulation-RTS-Arcade experience, you think we're joking right? Well it's the truth, and what makes it even sweeter is the developers at Elemental Games have not half-assed any aspect of the game, this is not just a bunch of sub-par minigames, but a fully fledged experience for such a wide range of genres that leaves you feeling a bit overwhelmed. 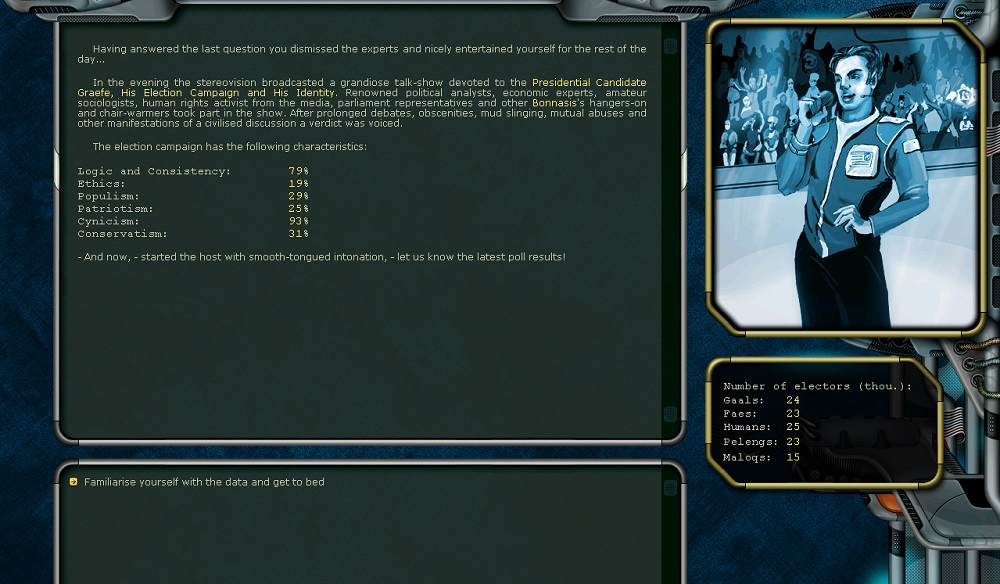 Where to start? My personal favourite aspect of the game is its adventure portion, this is played out in the most classic of styles; the text based adventure, and allows you to play out anything from escaping from jail, to a spot of detective work, and there is never a set formula, one game may involve you ensuring that your health, strength and popularity is kept to a particular level in order to survive, but another may need you to ensure that you do not run out of air in a number of steps, so you never get the feeling of 'oh no, not another one' because there are very few that are identical.

To find text adventures present in a game like Space Rangers is a very strange experience, especially when you find just how rich some of the stories are, and even if you've never played a text based adventure before you'll learn to love them. After all, what better introduction could you have than reading and enacting the tale of a ranger imprisoned, whose sole survival is ensured through racing cockroaches for respect, I kid you not!

So perhaps text adventures aren't really your thing, what about real time strategy? Space Rangers HD's real time strategy element will see you controlling a simple base with which you can build robots, each robot can be customised with different weaponry, but are your only form of unit. With your robots you must capture all of the bases on the map, sounds pretty generic, but that is until you realise that you have the ability to control each robot individually, allowing you to fire its shots and reign havoc upon your enemies. The autonomous nature of the AI and your own efforts adds a great dynamic to the mode, although it can get a bit repetitive at times, the act of assuming control adds a definite pinch of spice that similar games are lacking.

The final mini-game you'll encounter are the Arcade Battles, these are somewhere between Geometry wars and a tricky game of pursuit, you and a select number of ships are placed in an arena of varying size and complexity with the ultimate goal to remain as the last man standing, compared to the rest of the game that is fairly tactical and potentially slow, some players may find the Arcade Battles a little hard to swallow, especially when you consider that the controls for moving and shooting take a little getting used to. As someone who loves a slow paced game they were the only area that really dragged the game down, by speeding it up a bit too much! They just take a bit to acclimatise to inbetween chilling out in the expanse of space.

So that’s all the mini games, what about the game itself? Space Rangers HD at its core is a story driven space exploration that allows you to go around shooting up pirates as a mercenary, trading wears or even being a pirate yourself, the open-ended, almost sandbox nature of the game allows for every type of player to grasp the gameplay style they prefer, and play it till their hearts content, my favourite approach is a bit like my time spent in E.V.E, and you’ll often find me blasting asteroids, taking their riches and selling them to the highest bidder. A blank canvas is always the biggest allure for games like Space Ranger HD, and without a doubt the splattering of story driven text adventures, or objective driven RTS really complement the sandbox feel of the game, especially when you find yourself doing a bit too much of one thing.

Rather than play out in real-time, Space Rangers HD’s gameplay is turn based. Much like an old RPG docking at a planet will force you into a real-time area where you can receive missions, upgrade your ship and trade goods, but as soon as you leave, space travel takes place over days. This becomes an integral part of the game, as most missions require you to reach a specific planet, or take out a ship within a set number of days, and these guys mean business so don’t expect them to be lenient. 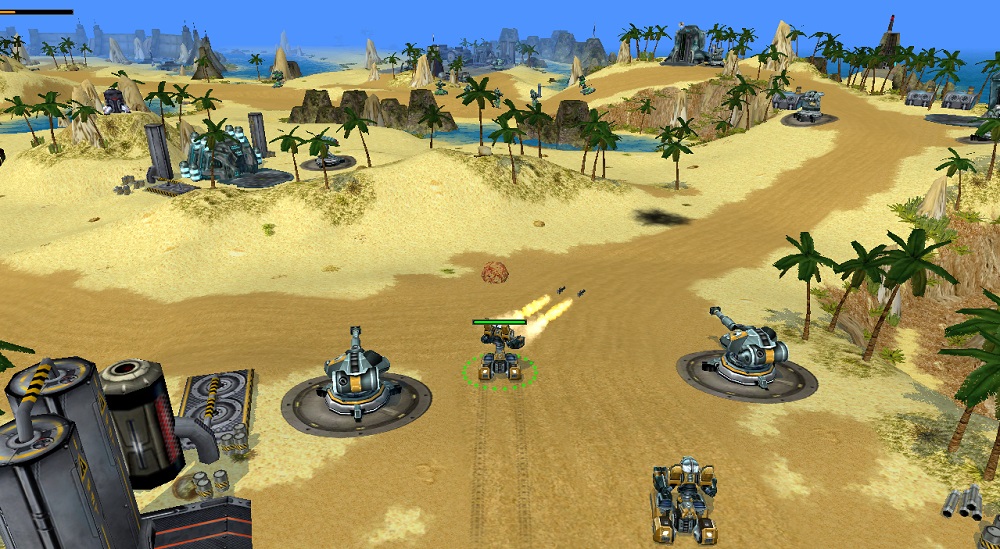 Whilst Space Rangers HD is not particularly hard, neither is it particularly easy, thankfully each mission in the game has an easier difficultly available to you, and at a cost you can extend deadlines, ensure air drops in real time strategy moments, and even get companions to tag along with you, though if you're not a good leader they will not stick around too long, it's just a shame the game doesn't have online co-operative play.

There is so much good in Space Rangers HD it's difficult to comprehend bad choices, whilst the game does feel dated in some aspects, and the lack of a zoom on the planetary view can be somewhat frustrating, you can get caught for hours tinkering with your ship, buying and selling, and just generally fulfilling the duties of a Space Ranger, oh and there's a huge story to the game too if you get round to that!

Space Rangers HD is the game you never knew existed, but always wanted, with engaging text based adventures, tense real time strategy and strange arcade battles there’s very very little out there that can boast just as much on top of an absolutely huge universe ripe for you to explore, exploit, and even exterminate.

Space Rangers HD is available now in all good stores that still stock Windows PC games for the SRP of £19.99, or you can pick it up straight from Excalibur Publishing's online store.