No this isn't the Space Hulk you're thinking of, in fact Space Hulk: Deathwing couldn't be more removed from the 2013 strategy release of Space Hulk, instead this offering from Streum On Studio is a first person shooter that hopes to encapsulate the essence and atmosphere of the cult tabletop game from Games Workshop into the FPS experience you always dreamed of!

For those not versed in the lore, a Space Hulk is not what you'd presume, they are actually not specifically one ship, but a mangled twist of various starships that drifts together. So why make all the effort to storm one? Some of the ships in the Hulk may be present for a millennia, this makes them extremely valuable to the Imperium for the technology and relics that may be aboard them. The only trouble is, Space Hulks tend to be the site of mass infestations of Tyranid Genestealers, a twisted sub-species of an alien race that can take over and kill the crew of a ship before they are even discovered.

This is not THQ's Space Marine, the guys at Streum On Studio make it abundantly clear that you're a Terminator, you're pretty much the elite of the elite, and even with just a Power Sword and Stormbolter in hand, you'll deal some serious damage, after all there isn't much that can penetrate Terminator armour, in fact the only real tactic against them, is pure strength in numbers, which unfortunately for you, Tyranids have by the bucket load!

One of the most important aspects of Space Hulk which they hope to keep alive in Space Hulk: Deathwing is the feeling of oppression and isolation; environments will span from tightly knit corridors to large open spaces just like the layout of the board game, this makes levels ideal to hide all those nasty gribblies you're sure to encounter. Now there's nothing scarier than a Tyranid Genestealer aboard the desolate corridors of a Space Hulk, but the Tyranids are a race known well for their terrifying forms, so you'll be seeing more than the standard variety that you may be used to, this not only allows for gameplay variety, but also increases the need to assess your tactics when you realise exactly what you're up against.

One of the most lethal abilities that the Genestealers can use against you is their overwhelming power of the Hive Mind, you see the Tyranid race are much like the insects of the universe and have learned to speak through a collective Hive Mind, this means that as soon as one Genestealer has seen you, any within range will immediately know of your presence.

It's alright though, because you might just be able to escape them, with the ability to weld doors shut or make new avenues of escape you'll be able to turn the environment against the Genestealers and in your favour, you just want to hope that you don't lock yourself away in a part of a Space Hulk with no exit, or you might find a few Genestealers crawl out of the woodwork.

So as if that wasn't terrifying enough a concept, there's a few nasty tricks the Genestealers have up their sleeves, well, arms, such as the Hunter class that can turn invisible, the Warrior that can spit plasma at you from long range, the heavily Armoured and Scything Talon-armed Assault Genestealer, and god-forbid you ever come up against a Broodlord! Unfortunately we were only able to get our eyes on the standard Genestealer, but what Streum On Studio have planned is going to be bigger, stronger and pretty darn lethal. 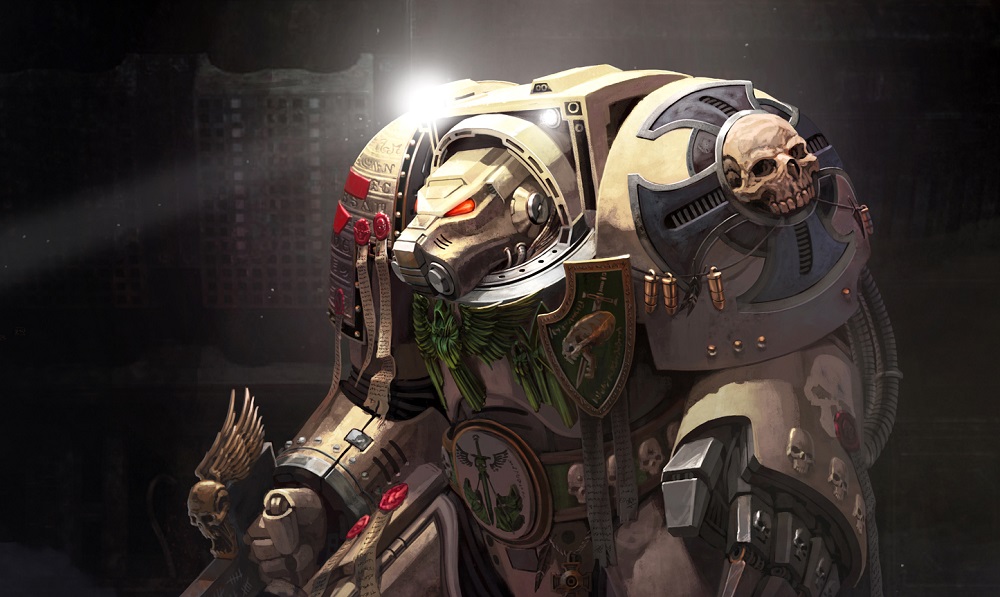 Something that may interest those that are fans of 40k will be absolutely flabbergasted to know that Space Hulk: Deathwing is set to include the ill-fated and pretty hideous Genestealer Hybrids that haven't see the light of day in 40k rules for a few editions, these hybrids are an ugly mix of human and Tyranid DNA that may have the hands of a human allowing them to shoot you with all forms of weaponry they can get their hands on, or perhaps more effective they may have the psychic abilities of a human that have devastating area of effect attacks and the ability to pull genestealers to your location from further afield.

Of course another very important aspect of a tabletop boardgame is strategy, now as a first person shooter, this version of Space Hulk cannot offer everything you would experience in a playthrough of the board game, however it does delve into the roleplaying side of things with a set of skill trees that can increase your capability in a number of fields such as Faith, Command, Melee and Long Ranged armaments, points obtained from successful missions can be spent in these trees, just don't expect to be able to max out the whole thing.

The game not only features a single player campaign where you will stand as the captain of a small team of Terminators, but will allow four player cooperative play via LAN or through the power of the internet, with obvious tweaks here and there to scale the difficulty when playing with a squad of friends. To keep true to lore and all that is fluffy, you can use whatever outfit you desire when combating cooperative play, however you will only be able to take one Librarian into a squad, because if everyone could be a Librarian the Imperium of Man might have won already!

Of course this is a game based in a universe that Games Workshop has created which means customisation! To simulate the almost endless customisation options that wargamers bring to the table, Space Hulk: Deathwing will allow players to customise their armour and loadouts once you've upgraded your skills to the level that allows you to use them. Obviously different weapon loadouts bring forth an element of strategy, and some weapons will be more effective against certain enemies, but you can expect to be able to unlock the use of Lightning Claws, Thunder Hammers and Storm Shields as well as a vast array of Space Marine armaments.

Currently Space Hulk: Deathwing is in its very early stages, however being built in Unreal 4 it has massive potential to be the isolated first person shooter aboard a Space Hulk that Games Workshop fans have dreamed of! Here's hoping more emerges from the depths of the warp to get our hands on soon, after all the game is a long way off.

Space Hulk: Deathwing is scheduled for a release during 2015 for Windows PC.