It’s the exhilarating thrill of the chase as you track down first place and blow them to smithereens with your cannon, only for third place to cut past you as they send an intense shockwave through the sky, without any other powerups to regain your lead it’s seconds too late as you pick up a missile and fire it towards the leader as they pass the finish line, if only you had transformed the missile into boost power to zip past them with smug resolve.

This is Diddy Kong Racing meets Mario Kart; innocent unadulterated fun, and so simple to the core it is effectively brilliant, SkyDrift is a new arcade plane racing game that’ll be the most breathtaking flight of your life as you combat blood thirsty opponents and the ever changing environment.

The game revolves around three different types of race; the Power Race, that presents a no-holds barred, action packed powerup based race that’s more competitive than Mario Kart, and more exhilarating than Star Wars Pod Racer. The Power Race makes up the largest part of the game, however in playing them you will shortly find your favourite powerup, and uncover the most effective plane. If you prefer a little less action, you’ve always got the Speed Race; much like a race from Wipeout or F-Zero you’ll gain boosts from Speed Rings throughout the level, allowing for tremendous speeds and some very close races. 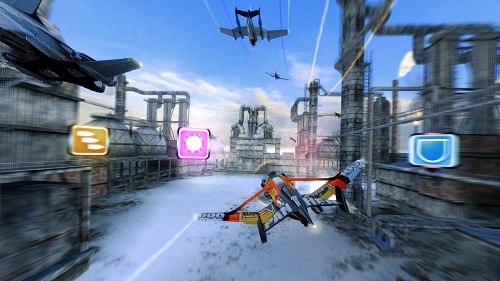 If you thought that the Speed Races were tense, the last type of race is the Survivor which is an elimination race coupled with powerups. You’ll not find a more intense, nail-biting situation in the game as the contenders are whittled down from eight racers right down to two in a manner of minutes. If you are fast enough to make your way through to the final round you will find a race for supremacy on a backdrop of some truly nerve-racking music.

The powerups that are present in two of the race types are an important area of the game, and with only six kinds there are no actual useless extraneous powerups each has its own purpose and is duly justified. Two support choices fit snugly alongside four offensive powerups including the powerful homing missiles, the less accurate but deadly canon, the lethal shockwave, a well placed mine.

To further enhance the powerup system, you can hold a maximum of two powerups at a time, and each can be upgraded a level to improve their effectiveness, however you’ve also a third choice; if you are a bit of speed demon, you can convert any powerup that you hold into boost power.

If you know your racing games then you’ll know that the boost is a powerful ally and can mean the difference between second-best and first-place, and converting your powerups is not the only effective way to gain boost power. Boost can also be gained by performing tricks as you duck and weave around the race track, overtake your opponents, and one of the most spectacular ways is gained by hugging the floor of the race track. 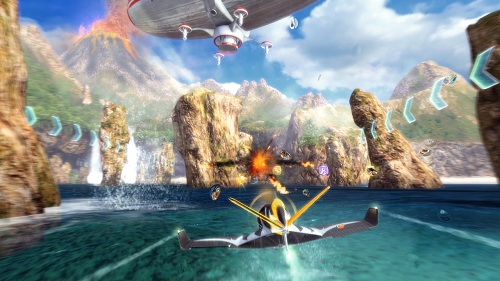 SkyDrift is not your standard arcade-racer; much like Mario Kart it encourages players to become tactical and so each powerup can counteract another, if you’ve a missile en-route; destroy it with a shockwave, perhaps you didn’t see the mine that you are coming head-onto; blow it up with your high-power cannon. When the chips are down, you’ve always got a chance to redeem yourself in SkyDrift, and there’s not blue shell!

There is a generous selection of planes available to you in the game for every type of racer; speed freaks can appreciate the Stallion Turbo which will often break the speed barrier in Speed Races and will erupt into almost uncontrollable speeds, or perhaps you like to weave in and out of dangerous environments like a pro stunt racer, then you’d prefer the Panther III that offers maximum manoeuvrability in all those tight spaces. If you find the planes that cater to that special need in you a little too extreme, then you can never go wrong with the all-round, well balanced Cooper Evo that will provide decent armour, manoeuvrability, speed and boosting ability for a brilliantly efficient starter aircraft.

The main single player campaign takes part across seven stages, each stage contains five to seven challenges, and they steadily increase in difficulty. Unlocking a new stage will give you access to new planes and skins, and whilst the game is pretty easy, if you do find it a bit difficult, or perhaps a bit too easy, there are three standard difficulty levels for a more challenging, or easier race. 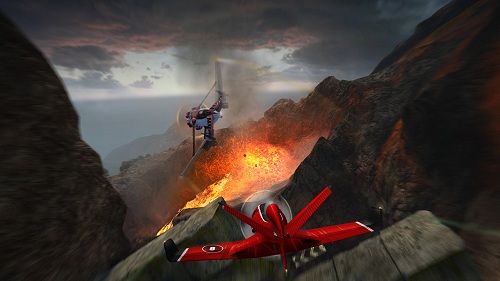 There are six race tracks in total with varying degrees of environmental hazards, tight corners, crevices and everything you would expect of fast-paced racers where death is hiding around every corner, except now the threat has been taken to the skies. Although six tracks are not very many for a racing game their longevity is increased with reversals, the different race types and multiple paths, however there is one dynamic feature that makes the tracks fantastic to race around.

The environmental destruction is a terrific example of why SkyDrift is not just your ordinary racer, and you will be pitted against cave-ins, falling buildings, and raging geysers whilst you tear through volcanoes, ship wrecks and icy fortresses of Solitude, the dangers of your environments and your opponents combined make winning a race a death-defying feat, and without the dynamic addition, it would possible be one racer to simply chuck on the pile.

A nice addition to SkyDrift is the badges and medals system that act as mini in-game achievements, and reward your actual accomplishments in-game rather than give you something to unnecessarily work for. Badges track repetitive tasks like the use of powerups, hugging the ground, and changing the skin of your plane, and all come with three different levels; bronze, silver and gold. Medals are far more specific and reward your skill, such as taking revenge on a player 3 seconds after they took you out, remaining in first place for over 50% of the race, or managing to break the sound barrier. The subtle achievement-whore in you all will greatly appreciate these awards that congratulate you on being good, rather that support a grinding task. 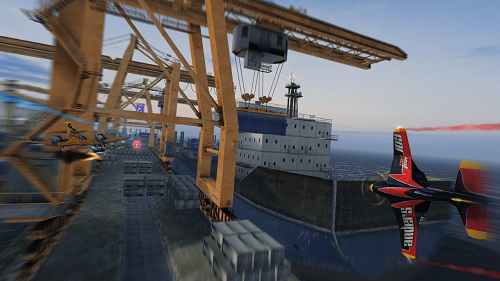 With such an exhilarating single player campaign I was itching to try out the multiplayer, however unfortunately there currently doesn’t appear to be a very large online community for this addictive competitive racer, hopefully as awareness grows for this veritable diamond in the rough, so will the amount of players online.

SkyDrift is a fast paced, action packed game that is sure to keep you on the edge of your seat; with the mix of the tense elimination round, true arcade action of the Power Races, and the intense speeds of the Speed Races you’ve got everything you could ever want in a simple arcade racer, it’s just a shame that the online community appears to be a bit sparse.

SkyDrift is available now for Xbox Live Arcade and Playstation Network for 1200 MS Points and £11.99 respectively, if you are looking for a quick-racing fix, look no further than SkyDrift, and play it online so I can get some more achievements!