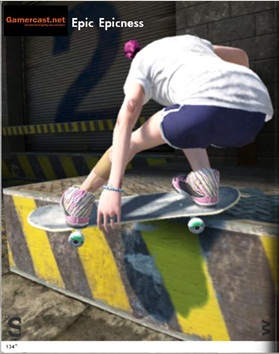 The newest title in EA’s skate franchise developed by Black Box, was released as of the 14th of May (UK), fairly soon after the release of skate 2 considering that only came out back on the 23rd of January 2009.

Upon beginning the game you are introduced to it with a short film, showing all the pro skaters present in the game, which also links to the games' story, there is a lack of live action in games these days and so I really enjoyed this unexpected surprise. The story present is that you are setting up your own company to sell boards and it's your mission to do everything possible in order to increases board sales, the amount varies depending on what you are doing, so if you 'kill' a really hard challenge you'll get more board sales than doing a simple flip over a tiny gap. However to make it even more interesting throughout the game you will have other customisable people join your team which means that every team is different in every game which makes the playability a lot higher as you can then take them into the online play of the game competing against other teams.

The character editor isn't really on par with other games, but as always it's a nice feature to be able to customise your character. You're slightly limited when choosing the clothes as there is a large selection of baggy t-shirts. However if creating a female character you're very limited in feminine clothes; with the choice of more baggy t-shirts or simply your underwear. Unfortunately both the male and female models are extremely similar to each other, and the women have big manly shoulders, so it doesn't make too much of a difference with who you choose, either way I still went with being female. 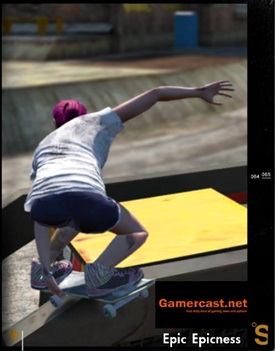 Customisation is key in skate 3 and doesn't stop there, as the huge new feature of the title is the ability to create and customise a skate park to your heart's content. Throughout the game you will unlock new areas and pieces to add to your park, then when you're happy with you park you can upload it to the skate 3 community so people can download and rate it and maybe even spend hours playing in it.

This doesn't stop at your park, you can also add in rails, ramps, plant boxes, whatever you have unlocked into to the actual game as well while you're playing. Another addition to all the different ways of creativity skate 3 has to offer there is also an online logo creator which can be found on the skate 3 website and after linking your gamertag to an EA account you can upload them to your game and display them whereever you want, as you can see with the Gamercast logo in our photos.

A closer look at the skate park editor shows that it is quite impressive allowing you to place all kinds of ramps, pipes and other bits and pieces. Items can be placed on loads of different levels so you can place things in the floor or floating in the air if you wish. On top of this you can also group items then move them, and then replicate or colour all of the items in the group at the same time, which is very useful if you want to move a custom sized fun box or a set of stairs, and saves a lot of time.

Skate.school otherwise known as the tutorials of the game are included for those unfamiliar with the series (or in want of an achievement), Coach Frank teaches you the basics, who happens to be ex-pro skater Jason Lee the actor you may have come to know as Earl (My Name is Earl). The tutorials are extremely handy for those wanting to get used to the controls, and the skate.school area is great for practicing and getting more accustomed to how the game handles. The game handly recommends session markers to you on occasion while playing (even though they aren't a new feature), and I thouroughly recommend you do use them, an easy rewind feature is great for if you miss that rail or if you happen to bail when almost getting that achievement.

Like the previous skate titles it features over 10 types of challenges to test its players, ranging from some extremely easy ones, to totally hardcore ones. It also features three new challenges which are 1-Up, Domination, and Own The Lot. Own The Lot is my favourite challenge as it allows multiple instances of Own the Spot all in one set place, needing you to only go to that challenge to do all of them.

The soundtrack to the game, as per most skating games is just right, I even found myself playing only Debaser by the Pixies for a few hours on end as I couldn't get enough of it. Of course you are able to use your own music, but they did put some good songs in there. 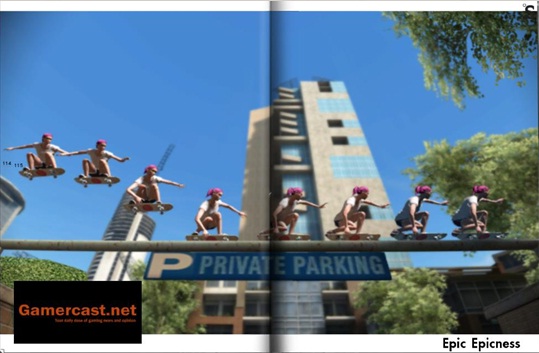 Like a most of EA's games out at the moment it features what is known as the $10 game, in order to upload your created content; videos, photos and parks you must use the code that comes in the box to register your game, granting you access to this service. However if you pick up a pre-owned copy with a used code you won't be able to share your creativity to the skate 3 community unless you purchase the Skate Share Pack from Xbox Live for 800 MS Points, bearing in mind that there are achievements to be gained from sharing.

I haven't fully enjoyed a skating game since Tony Hawks Pro Skater 2, which was a truly groundbreaking skating game. But I must say skate 3 is something I really got into and could see myself playing for a long time to come when I need that skating fix.

A slight apology for all my random pictures in the review, but I wanted to add a personal touch to the review, so I decided to share some pictures of my skater called Epic Epicness (The default skater was called the Legend so I thought I should name my lady in a similar vein).