The Middle Ages are not a very romantic time in history, full of dirty peasants, plagues, awful diseases and war, or at least that’s what the history books tell us. The Sims Medieval however is more like a Medieval Re-enactment, it skimps out on the dirty bits and focuses intently on the jovial dancing and merriment.

Now just because it has Sim in the title, don't presume that Medieval is simply The Sims 3 with a bit of a make-over, far from it in fact, the character creator may fool you, but as soon as you hit the meat of the game you will notice the lack of basic needs, house building, and all of the quests that are ripe for the taking.

When you begin the game you will choose an ambition for your Kingdom, create a Monarch and run-off sampling various quests that are suited to the Monarch that you have created; each quests generally has two different ways that you can go about it, and during each quest you will be given different paths that you can take. The Sims Medieval is linear, however it is clear that they have attempted to make it as non-linear as possible, so don’t just go expecting a complete open world.

The game is ruled by quests, and they do more than give you a simple task for your Sims, every quest you finish shapes your kingdom; quests are the only way to expand your land with buildings, and to sustain it with security, wellbeing and culture. They don’t just benefit your Kingdom however; each completed quest will supply your Hero with XP and money. 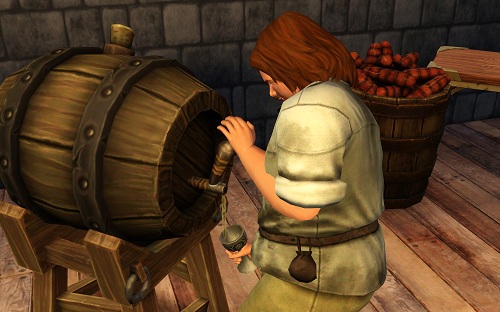 With nine Medieval professions in the game you’ll find yourself playing with more Sims than you will be used to, however you’ll be using some of them more than others; the Monarch is the main Hero of the game, and therefore the most used, but you will also create a Blacksmith, Physician, Knight, Wizard, Merchant, Bard, Spy and the surprisingly enjoyable Priests.

When you need to create a new hero you will be taken to the creator, each hero functions just as any Sim would, however they are given two traits and one Fatal Flaw, as you pick your traits and flaw you may notice a few hilarious choices; after all many people back in the Middle Ages were killed by whales —apparently- so you can give your Sim the pre-dispositional hatred towards whales, or maybe you want them to be a bit licentious, or bit of a fool. Each trait works wickedly well with the setting of the Middle Ages, and will aid and equally thwart your every action, the question is which fatal flaw can you choose that will not interupt your daily responsibilites and quests.

Each Hero has their own responsibilities that they need to uphold as part of their job/life choice, a Monarch may be required to hold court, or write laws, and a Priest will have to convert fellow Sims, and hold sermons. The responsibilities are one of the most fulfilling parts of The Sims Medieval, and keeps you working at your Sim, ensuring that you will not just buzz through quests, and turn the game into a boring grind. 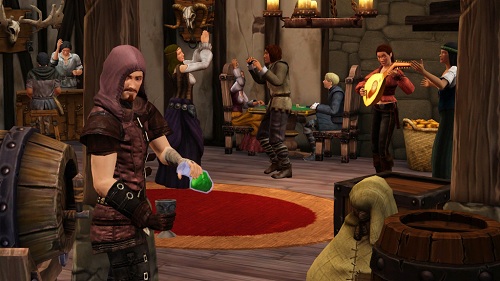 Whilst Medieval is linear, the game is as open as possible; when you begin you will pick an ambition for your Kingdom. When you complete a quest, you will receive Resource Points, resource points let you build up your Kingdom with new buildings, most buildings allow you to create a new hero; which opens up more quests. As you complete more quests to fulfil the ambition, you will then pick another ambition, and the circle keeps turning, the game is made up of a lot of choice, some that can ruin your Kingdom, and others that will work against some of your Heroes, it is just a shame that there is an end to all of it.

Living in the Middle Ages you can't exactly order a pizza in the middle of the night when you get the munchies, back in the day people had to make do with stone ovens, cauldrons and big pots, and herein comes another fantastic gameplay element of The Sims Medieval. Your heroes will have to rely on staple foods, like gruel, flatbread and stews, feed them too much of the plan old gruel and they won’t appreciate it, so EA have carried over the grocery system into Medieval. So if your Sim is feeling a little adventurous they can travel to the market and buy a potato for a hearty stew, or splash out and get a pigeon, it's little bits like this that make a Sims game different to any standard life simulation, and add a bit of extra monotonous routine that every true diehard Sim-fan dreams of.

Now it wouldn't be The Sims without Furnish Mode, and Medieval is no different, whilst you won’t get to construct your kingdom from the very foundations, you do have all the choice in the world when it comes to the dÃ©cor of your Hero’s house. Each building is furnished as standard, but as you rise with the riches you will be able to afford lush beds, and massive ovens. It is important to note that Furnish Mode is often pushed to the back of your mind with The Sims Medieval, so if you found the task of picking out the best wallpaper to go with your floor tiles you’ll be relieved to find that you can go through the game without even venturing into the tens of different light fixtures. 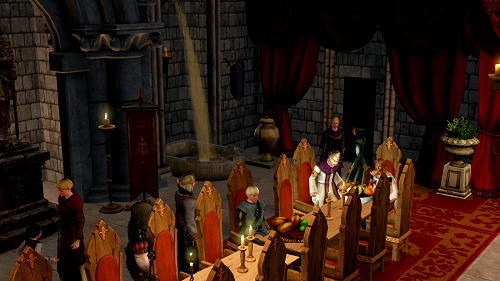 Fans of the Moodlet system will be happy to know that they play an extremely large part in The Sims Medieval; each Sim is governed by their Hunger and their Energy, after all even those in the Middle Ages had to eat and sleep. But the Moodlets are one of the most important features of your Sims; negative Moodlets are damaging to your Sim’s focus; and a lack of focus means they won’t want to perform their daily responsibilities let alone go about their quests, so it has never been more important to stack your Sims up with happy thoughts.

The only real gripe that many will have with The Sims Medieval is that you are unable to embody a Sim that is not on a quest until you get very very far into The Sims Medieval, so there is no free roaming element to the game available to you until you literally finish it. Just because you want to test the waters of being a Queen doesn't mean that you can chill out as a Monarch for the whole game; in fact you'll find that some of your Heroes will barely ever get used.

If you love The Sims, and are feeling a bit hesitant to whether or not you will like Medieval, fans of the series will be pleased with both the similarities and differences to previous games, and newcomers to the franchise will be exuberant at the introduction of quests, if you want to get addicted to a great game, and get caught up in a torrent of questing and swordfighting, then look no further than The Sims Medieval.

If you are a fan of the Sims then you will probably guess that this review has simply scratched the surface of The Sims Medieval; well you're right! There is just so much to this game, but like every other Sims title there is far too much to put into words that would not spell the longest review ever written. We haven't even touched on swordfighting, hunting, Kingball or potion crafting, you really have to play the game for yourself just to realise its potential.

The Sims Medieval is available now only on PC/Mac for an SRP of £39.99 you can also get a limited Collector's Edition from select stores that comes with some extra furniture and clothing styles. If you can get hooked on the Sims at a drop of a hat, or questing games, then you're going to love The Sims Medieval!