EA have today announced that they will be bringing the critically acclaimed Sims 3 to Playstation 3, Xbox 360, Nintendo Wii and DS this fall.

”We’re bringing players the best console and handheld game for The Sims franchise to date and are excited to offer a unique experience for all types of gamers on their platform of choice,” explained Sam Player, Executive Producer at EA. “Building on the unique traits system, living open neighborhood, lifetime wishes, and endless customization options, we’ve tailored each platform of The Sims 3 with exclusive features to allow for even more control, creativity, and connectivity.”

In the Sims 3 for console and handheld, players will be able to create Sims with unique personalities and desires as you can in the PC game, and control their lives within a living neighbourhood.
Additional to the console and handheld game will be the new “Karma Powers” that will allow players to help their Sim “get lucky”, bless them with “instant beauty” or even curse them with the dreaded “epic fail”, no that really is in the game! But players are to beware, as karma can always come back on your Sim. 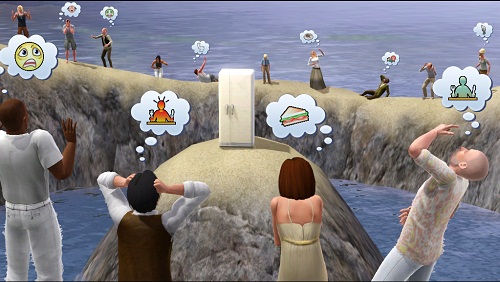 As the first Sims title on the current system platforms, players will be more connected than ever, as they design, build and share their creations and download content from around the world, in the same way that the PC version lets you. Plus you’ll get gamerscore to compensate you for all the time you will undoubtedly spend playing the game.

Exclusive to the Wii version of The Sims 3 will be an all-new beach town, where players will be able to enjoy The Sims 3 with friends, by going head-to-head in the new “Life Moments” game, you will also be able to take on adventure quests where you will need to explore your town and discover secrets. The Nintendo DS version will also allow players to build their home with the Stylus! As well as sculpt their Sim’s facial features in the most robust create a sim yet for a handheld console.

Although perhaps the Nintendo DS and Nintendo Wii versions will be very different from the originals Sims 3 for Windows, the announcement of the Xbox 360 and PS3 versions sounds very promising, and it will be interesting to see how they pull it off, all versions are set for release this fall. However The Sims 3 is also available now for Windows, and is one of the best Sims games yet!