As a grizzled cop with your life on the edge the timer complete and the prize is just within your grasp, hesistently you look around as you bring a fresh doughnut to your lips in the hope to increase your time in this game, but before you succeed a flash of colour darts towards you and slashes your body in two with the sharpened blade of a katana, in a red bloody haze Mizu Ichiban is the Last Man Standing, good thing all your friends were watching as it was all caught on TwitchTV, now they’ll never let it play down that you were beaten by a girl.

What on earth is this fantastic game of which I speak? Well Paradox Interactive like to call it The Showdown Effect and it’s a new arena based game that deserves your attention. Think of it like every cheesy cliche and action hero from the last twenty-or-so years jumped into a large arena to battle it out for the sake of senseless violence full of explosions, gibs and one-liners. It's a fast paced combat extravaganza filled to the brim with destructive mayhem, and includes the ability to stream to TwitchTV from inside your game with no interference! 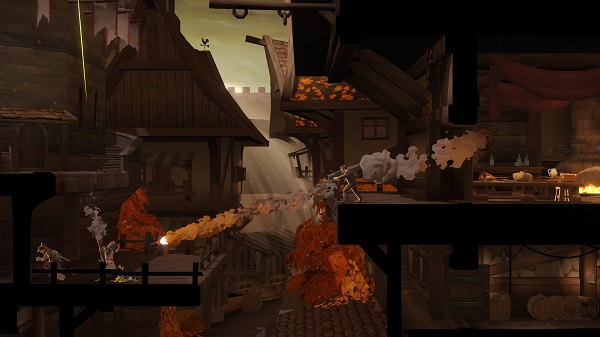 A multiplayer game must be judged by the merit of its game types which is where The Showdown Effect likes to be that little bit different. It may look like your standard affair, however the Showdown game type is five minutes worth of action-soaked mayhem until it comes down to the real shootout in the Last Man Standing where everyone has a chance at glory, and those that can succeed in staying alive with no spawn bags the bonus, its twitch-worthy gameplay at its best, and there's nothing better than the realisation that you may have sucked in the round, but you managed to be the Last Man Standing, I'm still not sure how this has happened to me on multiple occasions!

However it turns out that there is an elite section of players that are ridiculously and at times unfairly better than you, to counteract this there are two other game modes Expendables and One Man Army where you can get the full enjoyment and satisfaction out of The Showdown Effect, without swearing in frustration.

With one team in the role of the good guys, and the other in the role of the unlimited surplus henchmen, all cliched action heroes must die! If the henchmen manage this feat then teams will swap for the number of alloted rounds. As usual the good guys has its advantages, however being a henchmen not only allows you unlimited ammunition and location pointers for your adversaries, but also randomly generates you any weapon be it melee or ranged, so be prepared for a few hilarious rocket-fuelled incidents. 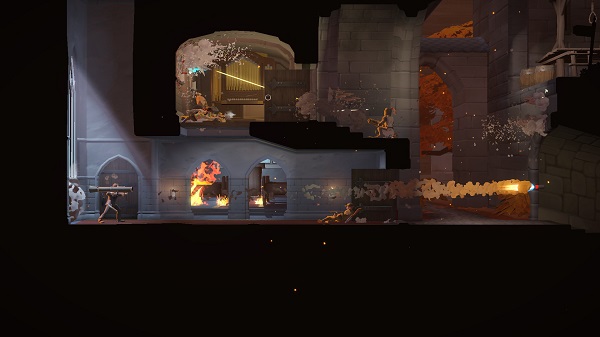 Expendables literally breaks open the barrel of fun in The Showdown Effet, and as a team based game it makes the ratio of good players : you, a bit easier to swallow, The Showdown Effect is a very tricky game to master and you will have to keep at it, learn all the tricks and follow guides to survive in its fast paced mode, however if you already feel that you are infinitely better than everyone else then you've always the option of One Man Army where players pratically play tag to be the hero.

The range of weapons is not momentous, you’ve got the usual suspects comprised of pistols, shotguns, automatic rifles and even rocket launchers, and at launch it was clear what most users would go for, however it took a little while for everyone to realise that The Showdown Effect is based entirely on your skill, you can't simply pick an automatic rifle because it shoots more bullets. In fact if you wish to hit your opponents you have to shoot them on target with your mouse, generally whilst diving, dodging and rolling out of the sights of your other enemies, understandably most players now take to melee objects that are freely strewn about the levels with the likes of bags of money, stools, halberds even maces, simply because they are far easier to hit something squishy with, you just have to ninja yourself close enough to use them.

Levels are multi-tiered, and with only eight players in a match you won't find yourself being spawn-killed, or mowed down too quickly, better yet, each player can only see the characters line of sight, making for a far more challenging hunt. For true hunters the game caters brilliantly, and every character will give off their location with one-liners and throw their rolling, dodging and jumping grunts, Arrowhead Studios have really rewarded those that are able to stop, and become fully aware of their surroundings. 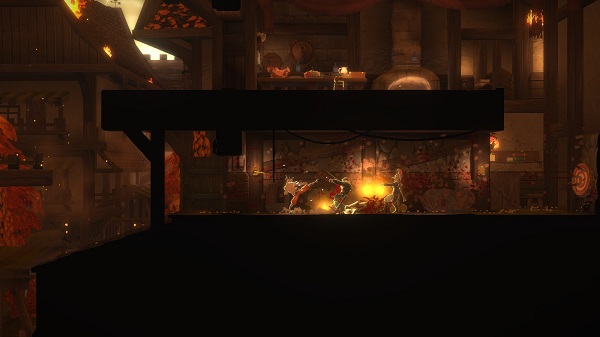 When you begin the game you'll have two heroes in your roster; Dutch McClone a simple Kindergarten teacher attempting to get his identity back by travelling to the future, and Hailey Skye who is intent on finishing the work of her Nobel prize winning father who was mysteriously killed, each character in the game has a suitably cheesy back-story full of baggage and terrific lines with the likes of the grizzled cop one day from retirement, the framed Lord Edmund out with vengeance on his mind or Mizu winner of a Battle Royal!

As entertaining as they are, the different characters aren’t simply an aesthetic skin, and each has their own special ability to make them stand out from the regular crowd, some like Sgt Koboldski’s doughnuts regenerate health faster than a bandage, or Shur Foo’s Fury Kick that will give you that extra boost of speed to take out your enemy before they know what hit them. Speed is what the game boils down to, and most abilities do feel useless unless utilised at the exact right time, so once again, if you've not got the skills you'll look quite the fool!

All of these traits culminate to one brilliant fact; the game is driven by its community, thanks to the ability of creating your own games you can host, spectate or simply join a game, making it the perfect game for a LAN! Which is always music to my ears. Whilst it only supports up to 8 players, it won't take long before your game has four or five ready for fast paced action, and one-liners galore, played with friends the game really excels, it's just a shame that some of the players out there are on the verge of unfairly elite. 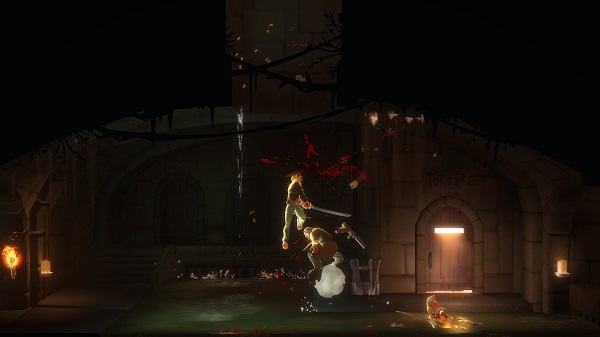 As you play match-upon-match, taking down your fellow action heroes and simply just taking part for the hell of it you’ll be rewarded with AC points, rake up enough and you’ll be able to purchase elaborate unlockables that include new weapons, new characters and best of all; custom rulesets! The custom rulesets prolong the fantastic longevity of the game, and allow your simple showdown’s to turn into one-hit kill matches, limitations on bandages, weapons and special abilities, or my personal favourite always gib!

Custom games aren't all that's on offer in The Showdown Effect and the game includes a ranking system, unfortunately it never seems to work the way you want it to, believe you me, as a veritable noob, who wants to be paired with a four star master? The ranked matches do appear to be the downfall of the game and somewhat pointless when you don't want your lack of skill to shine so much, it does seem far fairer to enter a custom game, then you might luck out and find a few players in your league.

It’s over the top and completely bat-crazy, The Showdown Effect is the type of game that dreams are made of, the idea of the Last Man Standing is a great breath of fresh air into the stale landscape of multiplayer gaming, and unless you don’t have an internet connection you won’t find a more quirky and twitch-inducing game with such colourful characters, madcap violence and ridiculous one-liners, it is by all means a keeper, so chill out dickwad, just be sure to play with your friends!

The Showdown Effect is available now from all good digital distribution sites for the low price of £7.99 for the standard edition and £14.99 for the Digital Deluxe Edition that includes bonus characters, a giftable copy of Magicka and the game’s cheesy soundtrack.