Being a massive fan of simulators, I've yet to experience Ship Simulator, a hugely popular title from VSTEP who have been creating ship simulations for the past 5 years. So being veterans of Ship Simulators we know that they are pros, giving you the ability to free roam in over 25 ships, from tugs to motor boats, hover crafts to inflatable dinghies, VSTEP have got it covered, each ship handles with varying degrees, and are controlled in the respective fashion that you would control them in real life.

There are no tutorials to help you get to grips with all the different varieties of boats, however a short read of the instruction manual will have you initiated in no time, and the boats themselves are not very difficult to control, and it’s a great achievement to master the controls of a motorboat in a strong westerly wind as you try and pull off a docking manoeuvre.

You also get to option to 'walk-through' your helm, which gives a nice look into the interiors of the ship that VSTEP have designed, and although you won’t have much to explore in a motorboat, as you do an ocean-cruiser, the option gives a great first-hand view of the game and the amount of detail that has been put into the ships.

The campaign eases you into the flow of the game, giving you simple missions to start with, such as getting from Point A to Point B, docking at Point C then controlling Boat 2 to Point D, progressing to missions where you must salvage other boats to safety, dodge icebergs in treacherous waters and make good of a bad situation, with missions ranging from very easy to very hard the missions are extremely varied and provide hours of interesting and satisfying gameplay.

Ship Simulator is full of different options for the boating enthusiast in you to keep yourself satisfied. With the campaign containing over 30 missions, free roaming in over 10 locations, 25+ different ships, single missions, and a multiplayer option you'll be at odds on which to tackle first. The three different campaigns are carrying out assignments for the good of the planet with Greenpeace, ferrying tourists around the world with the Tourist Tales, and sift the men from the boys in the Core Campaign that only the true sea captains will excel in.

Another new feature to the series is the inclusion of dynamic weather which makes this the first title in the series to do so, the weather is great and looks fantastic, especially in missions where the weather turns bad, a great way to experience it is in free-roam where you can turn on any weather that you wish. With the ability to alter the precipitation, wind and fog to extreme situations it's just a shame that there are no whirlpools to create. But with snow storms, dense fog, or even hurricane winds you're driving skills will be pushed to the limits!

The only true downside to the game is that in order to access the multiplayer and the single missions you are required to register with the forums at ShipSim.com, however on the forums you'll find all the help and tips you may require for controlling the ships, and even find some very interesting discussions on the game, and the ships within it.

The ship damage is slightly disappointing, rather than physical damage, your ship slowly begins to sink into the water, and the total decimation of the ship leads to an uneventful sink of the whole ship, that doesn't ask for a replay. Ship damage is also extremely easy to rack up for the inexperienced boat driver, which makes the lack of auto save slightly frustrating at times. 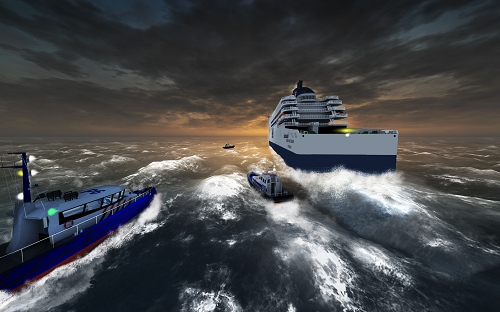 Ship Simulator Extremes is very easy to get to grips with, full of engaging missions, with the huge variety of boats, any fan will not be disappointed, as a simulator the game is exceedingly entertaining and the perfect example of a well made simulator, it may not be as extreme as the title suggests, however it is a jolly good ride.

Ship Simulator Extremes is available to buy now for Windows from all good retailers, as well as most online distribution platforms for an SRP of £34.95.