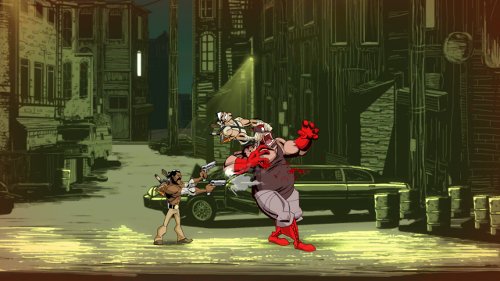 Award-winning independent studio Klei Entertainment have announced that the highly anticipated downloadable action game Shank will be available for download come August 24th for Playstation Network and August 25th for Xbox Live Arcade. Blending the classic side-scrolling action gameplay of titles like Metal Slug, alongside the unique stylised 2D art direction of Jeffrey Agala, and a revenge story penned by award-winning game writer Marianne Krawczyk Shank is one hell of a ride!

"We committed ourselves completely during the development of Shank and it's been extremely gratifying to see the support we've received from the gaming community and press," said Jamie Cheng, CEO of Klei Entertainment. "Watching people play and seeing them smile; it's fantastic to see them latch onto the things we love most about Shank -- the art, the story and of course the gameplay."

Shank tells the story of a gangland betrayal via a mature pulp-fiction lens, controlling Shank, gamers should not be surprised as they bloody their hands uncovering the secrets behind his past, and the reason he is hell-bent on revenge. With an intuitive combat system players can unleash a number of creative combos as they take down waves of enemies in their path.

Shank also comes with a co-operative mission that allows a friend to play locally and discover the back story of the revenge plot. This mission allows players to play as Shank, or his partner-in-crime Falcone, complete with double-team moves and gameplay that encourages teamwork! This is the second game recently to push local co-op alongside DeathSpank, and the inclusion of it into downloadable games is terrific.

Shank will be available for download from August 24th 2010 on the Playstation Network and Xbox Live Arcade for £9.99 and 1200 Microsoft Points respectively.