EA have announced that fans of Akira Yamaoka's music will be treated to a Shadows of the Damned soundtrack when they pre-order from GameStop, Amazon.com and the EA Store. Pre-ordering from these outlets will give you a bonus digital download of twelve songs from the legendary, critically acclaimed composer, Akira Yamaoka of Silent Hill fame. His haunting sounds and ethereal effects provide the perfect backdrop to Suda 51 and Shinji Mikami's psycho-punk action thriller Shadows of the Damned. The twelve tracks are;

1. Theme of Shadows of the Damned (featuring the English gothic punk band, The Damned)
2. Shedding Stars
3. Walk if Off
4. Last Stop, Windows Up
5. This Way Comes
6. Fathomer
7. Smile for a Broken Dawn
8. Showdown at High Moon
9. Cold Turkey
10. Broken Bones, Broken Promises
11. Dropped Off Between Stops
12. Clawing at the Veil

Heavily influenced by the Grindhouse style including Quentin Tarantino's and Robert Rodriquez's work, Shadows of the Damned follows a demon hunter named Garcia Hotsput deep into a hyper-demented re-imagining of hell, like you've never seen before. He's there to rescue Paula; the love of his life by defeating the armies of darkness with the power of the light... yes it does sound a little cliched, but Japanese action titles are not known for their stories. What Shadows of the Damned will excel in is shocking and unique gameplay experiences that include over-the-top action and huge boss battles, and even a few demented puzzles in there. 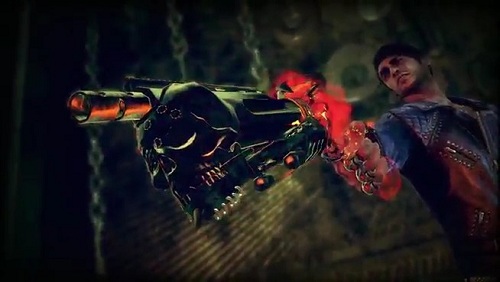 I swear by the fact that Suda 51 is still yet to make a bad game; Michigan was fantastic in it's own way, and Shadows of the Damned looks to be a promising Devil May Cry'esque action title. Developed by Grasshopper Manufacture Shadows of the Damned is the love child of No More Heroes' Suda 51, Resident Evil's Shinji Mikami and Silent Hill's Akira Yamaoka and will be available June 24th in the UK for the Xbox 360 and Playstation 3. Unfortunately there's no news of UK fans getting the soundtrack, here's hoping that we'll get a physical one!