It's seven years into your reign of the Yamama Clan, after plotting to crush the Hosokawa your efforts appear in vein as you are yet to get anywhere near 50% holding of Japan. After spending the last two years appeasing your neighbours you instigate a plot to overthrow the Isshiki clan; whilst they are smaller than you and it will take a lot of honour, the provinces they open up to you will be invaluable to Yamana. However you are one man short on your plot, Rokkado has an unmarried vassal, offering a marriage to them could well seal the deal, putting Rokkado on your side. Unfortunately sitting on your plot for too long, Isshiki has discovered it; what action will he take?

This is just a mere second in the timeline of Sengoku; a period in Japan's history that was full of social upheaval, political intrigue and constant military conflict that lasted from the middle of the 15th century to the beginning of the 17th century, eventually leading to the unification of political power in Japan.

The aim in Sengoku is to become Shogun and hold the title for 3 years, now it’s not as simple as pulling a few favours for your allies, or sending ninjas out to your enemies. To become a Shogun you and your vassals must control over 50% of Japan, this is all whilst the other Lords strive for the very same goal, and if you do become Shogun, they will do everything in their power to topple you. 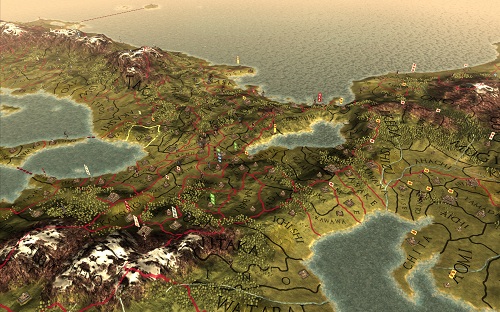 The Strategy genre had a simple life in the good old days; you could get by with a brilliant concept, some gripping gameplay and a few sprites on the screen. Unfortunately now you need ridiculous graphics, and a subpar strategy. Thankfully Sengoku keeps things simple and traditional; the menus are the largest part of the game, and all are beautifully presented, similarly Japan is represented with an intricate fully 3D map.

There are a selection of historical suggestions that you can play that take part over various important times during the Sengoku period; particularly the Onin War and the Kanto War; with both scenarios you are given a wealth of Leaders to choose from, each has their own vassals, enemies, friends and difficulty ratings. However if you prefer to take on the tough challenges whenever possible, you can pick any lord of any province in the whole of Japan, and attempt to take over the country!

The best of Lord’s are formed by his advisors that can spread good opinion and impose your influence to the far reaches of Japan; your main operations are made of three simple roles. To keep your people complacent you have the Master of Ceremonies that will collect your taxes, improve villages and improve the relations between yourself and other leaders. If you are martially inclined then the Master of Arms is one of the most important advisors and his word can improve your castle, restore order to a rebellious state and recruit Ronin for honour. The Master of the Guard is for the more slippery of Lord’s and he can expand your guild slots to allow for new types of militia, sow dissidence in the provinces of your enemy, and hire ninjas to perform your dirty deeds. 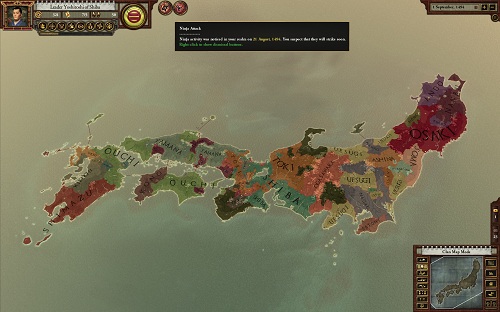 Opinions are gold dust in Sengoku, and one Lord’s opinion of you can be the difference between accepting a diplomatic marriage, and joining in on a plot to usurp Japan’s largest clan. So perhaps this isn’t too different to most strategy games, after all it is always the judgment of your friends and enemies that make and break power. However what makes Sengoku so different is that it is utterly character driven, and the huge database of individuals has their own personalities, allegiances and they can change like the wind, making every game of Sengoku a completely fresh experience.

In a country full of questionable characters, diplomacy is key, and you can interact with the hundreds of inhabitants of Japan with the most basic of diplomatic offers; to sway a clan’s favour gifts are always the easiest form of flattery, however bonds can also be strengthened with an arranged marriage. Diplomacies work both ways and hostilities can also be reinforced with kidnappings and declaration of war, you can even demand seppuku to gain honour from your disreputable vassals.

One of the most powerful tools at your disposal is the ability to harbour plots, plots allow you to exact your necessary evils with the help of others; each plot requires the addition of other character’s approvals that will strengthen its plot power so that it can be taken to the stage of execution. Plots can help you bring down the clan that is holding that last 10% of Japan, or bring down unwanted Lords. Plots are the most interesting part of Sengoku, however to make things even more exciting, they are also the most volatile. 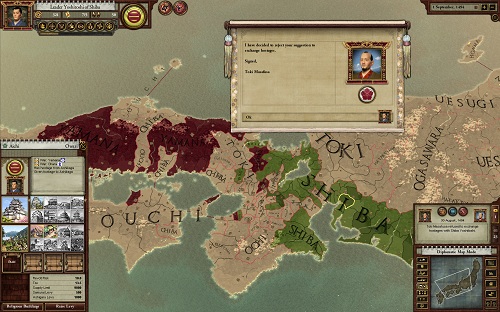 Paradox Interactive are well known for their traditional Western Strategy games; if it isn’t rooted in medieval society, its Victorian Britain, the World at War, even Western history on the verge of fantasy, so Feudal Japan is quite a different step for the Western orientated developers, and their fans. However Paradox has put just as much love and attention into Sengoku as they do Victoria or Hearts of Iron, so if you are into Japanese history, the game is a gold mine of more culture and historically accurate details than you can shake your Akomeogi at.

Those of you that like a bit of action in their strategy may not feel at home with Sengoku; much like a good thriller, Sengoku is all about the politics, and it is possible to climb to the title of Shogun, without attacking a single province, siege a castle, or send out ninjas. In Sengoku, diplomacy is your friend, and whilst you can go out and attack your enemies, declare war on the whole of Japan and fight your way to supremacy, the most effective scenarios are played out with minimal blood spilt, making your rise to Shogun all the more impressive, it just might not be everyone’s cup of tea.

Sengoku does not hold your hand as you play; there is no tutorial to ease you into the series of menus and choices that some gamers require. Whilst there is a hints system, it takes more than an hour to truly understand absolutely everything that you are up to, and it does need your full attention, time and patience. However the rewards are momentous, and Sengoku, if anything, is most notable at creating outstanding stories to tell of your ascent to Shogun. 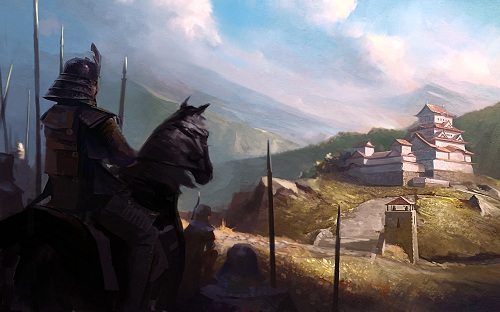 Whilst the singleplayer will be the biggest draw for most players, Sengoku also offers an ample multiplayer experience that supports up to 32 players online and via LAN, and gives rise to the opportunity of an excruciatingly long multiplayer session, just like Civilization III, and before you know it, Sengoku stops being a game, and becomes a point of life.

Sengoku is a strategy title that will definitely not be for all, whilst the allure of a game that can be won with pure political process is absolutely fascinating, unfortunately the rather niche world of feudal Japan will put off strategy fans that prefer Western based grand strategies. However as Japan’s presence in the world becomes larger with video games and anime, there will always be a place for the romantic and foreign traditions of the Sengoku era.

Sengoku is available now in stores or via GamersGate, Steam, and various other direct download services for the SRP of £24.99, if you love feudal Japan and all of the drama’s and plots, you won’t find a closer representation of the time than in Sengoku or you’d be watching a Kurosawa film!