In the latest issue of Nintendo Power (America’s Official Nintendo magazine) they have confirmed that Scribblenauts 2 is in development for DS and is being created by the original team at 5TH Cell. 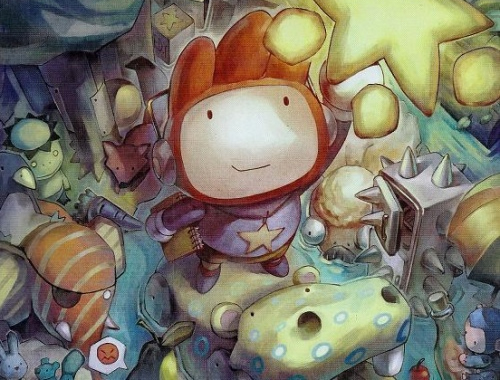 Scribblenauts 2 claimed the front cover of the April 2010 issue of the magazine, having detailed information on the sequel and what players are to expect.

It has been confirmed that the controls are changed, making Maxwell now controllable with the D-pad and not just the stylus, fixing the slightly buggy and unresponsive controls in that the first game had.

It will feature 120 levels which have been revamped, causing the player to have to think even more when solving the levels, so a player can no longer just use the same items to solve nearly every level (UFO, jetpack, death etc).

There will be 10,000 new adjectives in the game, and the added ability to string them together, creating an even larger amount of variations when solving levels, or just for fun, I would like to see a dancing cat, maybe a sad bear, who knows what possibilities there will be.

The level editor is going to contain more options for the player, the physics engine is being updated and improved and there will also be a new hint system to accompany it all.

It’s currently set to come out in the third quarter of 2010.